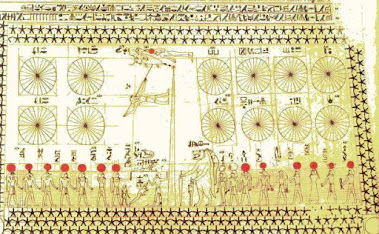 Early Egyptian astronomers observed and recorded the movement of the stars to understand their seasonal effect on the Nile Valley. These astronomers were mainly temple priests who had been keeping records of astronomical cycles and events for many millennia.
Plato wrote that Nilotic scribes had been keeping astronomical records for 10,000 years. He should know since he studied with a priest in Memphis for 13 years, and knew about Earth's Great Year. This is the time of between 25,000 and 28,000 years that it takes for Earth to complete the cycle of axial precession. This precession was known to Plato who defined the "perfect year" as the return of the celestial bodies (planets) and the diurnal rotation of the fixed stars to their original positions. The ancients understood much more about the natural world than we moderns recognize.

By 4245 BC, the priests of the Upper Nile had established a calendar based on the appearance of the star Sirius. Apparently, they had been tracking this star and connecting it to seasonal changes and agriculture for thousands of years. The priest Manetho reported in his history (c.241 BC) that Nilotic Africans had been “star-gazing” as early as 40,000 years ago.

The ancient Nilotic astronomers observed that 36 groups of stars (small constellations) rise in a consecuative order on the eastern horizon every 24 hours. Each decan rises for 10 days. This gave them the formula of 36 X 10 = 360 days, with the calendar broken into 12 months of 30 days each.
By the time of the New Kingdom, each decan was regarded as a divine power related to the High God whose emblem was the Sun. The solar orb (shown above) appears over their heads to identify them with the Creator. These figures have descriptive names in ancient Egyptian, many of them with the Horus designation: Hor/Her/Hery, refering to the realm of the High God.The word Horus means "Most High One." In the Pyramid Texts Horus recognizes his Father in the deceased righteous king. In the priest's prayer he says, "Horus is a soul and he recognizes his Father in you..." (Utterance 423)
The astronomical ceiling paintings at Abydos and Dendera are different, making it difficult to interpret the meanings. Perhaps these represent different cultic interpretations or different ways of representing the solar year. In 1973, Otto Neugebauer suggested that the complexity of Egyptian calendars "represents the peaceful coexistence of different methods of defining time moments and time intervals in different ways on different occasions." (Current Anthropology Vol. 14, No. 4, pp. 389-449)
Senenmet was Queen Hatshepsut’s architect and chancellor. His tomb was built close to the Million Year Temple of his mistress.The four walls of Senenmet's tomb are decorated with utterances from the Ancient Pyramid Texts that mention the "imperishable stars." The imperishable stars reside with the Father in heaven. Utterance 667 of the Pyramid Texts makes this clear: "Oh Horus, this hour of the morning, of this third day is come, when thou surely passeth on to heaven, together with the stars, the imperishable stars."
The astronomical ceiling contains the oldest known Egyptian celestial diagram. The diagram is divided into northern and southern sections. The northern section mentions the 12 months of the civil calendar and has representations of the northern constellations. The southern section includes lists of decans and the planets visible to ancient Egyptians with the naked eye. Mars is absent because it was the planet of Horus, the son of Ra. Horus was not regarded as a lesser assisting power/deity. The Egyptians called Mars Her Deshur, meaning "Horus of the Horizon."
The north-south axis represents the hope of resurrection, as is evident from the Pyramid Texts. In his resurrection body the deified one is to "traverse the Mound of Horus of the Southerners" and "traverse the Mound of Horus of the Northerners" (PT Utterances 536 and 553). The risen ruler restores his settlements and cities, and opens doors to the Westerners, Easterners, Northerners, and Southerners (PT Utterance 587). He is to "betake himself to the Mansion of Horus which is in the firmament" (PT Utterance 539).
Some have supposed that the diagram is a monumental papyrus scheme prepared for the construction of a water clock or clepsydra. The clepsydra had been used for thousands of years by the Nilotic priest astronomers to measure the passage of time.
Related reading: Who Laid the Foundations of Science?; The Ra-Horus-Hathor Narrative; Horite Mounds; Early Resurrection Texts; Righteous Rulers and the Resurrection; Aboriginal Star Maps
Posted by Alice C. Linsley at 12:22 PM