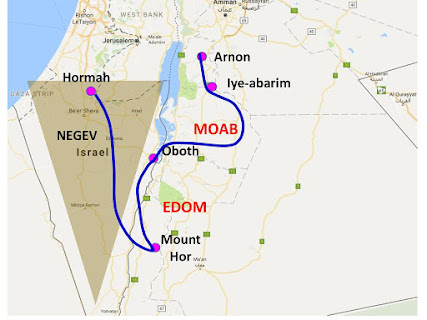 In this article we will trace the travels of the Israelites moving backwards from Arnon to Hormah. By moving this direction possible connections between Arnon, Arad of Hormah, Mount Hor, and the Horite Hebrew of Edom become more evident.
Arnon refers to a canyon/valley and a river that rose in the mountains of Gilead, east of the Jordan. This was the land of the Ar of Moab whose lords resided in the high places. Deuteronomy 2:36 claims that the Israelites captured the town in the Arnon gorge and all the towns as far north as Gilead.
Ar indicates a ruling caste. The Aro were a militant caste of ruler-priests who spread out of the Benue Trough region of modern Nigeria. The Ar designation appears in many names, including Joseph of Arimathea, King Arthur, and King Arad who took some of the Israelites captive (Numbers 21:1). Arad was the ruler of Hormah according to Judges 12:14.
Iye or Ije Abarim was one of the wilderness places where the Israelites stopped at during the Exodus. The name means "Ruins of Abarim." According to Numbers 33:44, they traveled from Oboth, and encamped in Iye Abarim.
Oboth is one of the places where the Israelites stopped during their travels. They camped there after leaving Mount Hor in Edom where Aaron died.
Mount Hor in ancient Edom is where Aaron transferred his priestly office and garments to Eleazar before his death. It is also where he was buried. This mountain was sacred to the Horite Hebrew of Edom long before the Israelites arrived there.
Hormah was ruled by King Arad. It was a city north of Beersheba where Abraham's cousin bride, Keturah, resided. Sarah resided in Hebron.
There is evidence that the people who came out of Egypt had kinsmen at some of the sacred elevated settlements in Canaan and that their travels took them to where they could connect with those kinsmen. The Horite Hebrew ruler-priests like Moses, Aaron, and Korah were related to the priests of Aram, Edom and Moab. They shared a common male ancestor in Terah. The Moabites are descended from Terah through his deceased son Haran and his grandson Lot.
Analysis of the marriage and ascendancy pattern of Moses's family reveals the distinctive pattern of the Horite ruler-priest caste. This should not surprise us since Moses is the half-brother of the ruler-priest Korah, a descendant of the Horite Hebrew ruler, Seir of Edom. 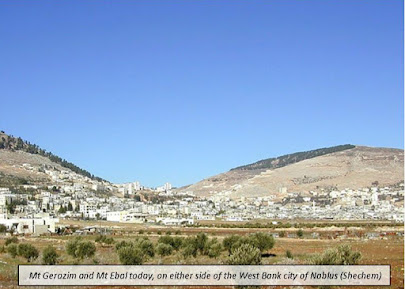 According to tradition, Moses died before the people entered the land of the Canaanite peoples. Before he died, Moses gave these instructions "when the Lord your God has brought you into the land which you go to possess, that you shall put the blessing on Mount Gerizim and the curse on Mount Ebal" (Deut. 11:29).
Mounts Gerazim and Ebal rise on the south and north sides of the West Bank city of Nablus in the Vale of Shechem. Shechem became the first Israelite capital. Some scholars believe that the blessing-curse ceremony was not part of the initial travels of the Israelites, but instead reflects a covenant ceremony (Deut. 27) experienced by the second generation of Israelites in Canaan.
The root of Gerizim is garaz, which means to be cut off, implying destruction/infertility, or death of a people. From Gerizim, the priests declared the blessings and from Ebal they pronounced the curses (Deut. 11:29).
On Mount Ebal the Israelites built an altar using natural stones. The stones were whitened with lime and peace offerings were offered on that altar. Apparently, Ebal was a mountain sacred to the ancient Edomites. Genesis 36:31 notes that the Horite Hebrew rulers of Edom were an older royal lineage than the Israelite kings.
Mount Ebal is higher than Mount Gerizim. It rises 3084 feet above sea level, some 194 feet (59 meters) higher than Mount Gerizim.
Related reading: Sacred Mountains and Pillars; Hebrew Priests in Aram, Edom, Judah, and Moab; The Chiefs of Edom; Horite Hebrew Rulers With Two Wives; Hebrew, Israelite, or Jew?
Posted by Alice C. Linsley at 4:54 PM