Bees and Honey in Biblical Societies

There are at least 53 references to honey in the Hebrew Bible. Archaeological discoveries reveal that the ancient Israelites kept bees as did their Hebrew ancestors. In Exodus 3:8, the land of Canaan is described as a place "flowing with milk and honey."
It was not easy to acquire honey because the bees often built their hives in the crevices of high rocks. This drawing (c. 6000 BC) from Spain shows a woman on a rope ladder collecting honey while the bees swarm around her. 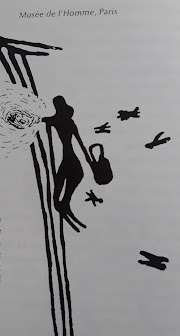 Honey was used as a sweetener and as a medicine. It was applied to wounds to prevent infection. This was done during World War I to help wounded soldiers. Honey draws the moisture out of wounds. It has antimicrobial and antibiotic properties, and can kill Staphylococcus and E. coli. 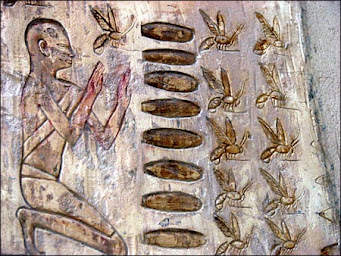 Among the Nilotic peoples honeybees were kept as early as 3500 BC. Egyptians made hives out of pipes of clay and stacked one on top of another (as shown in the image above). The hives were moved up and down the Nile on rafts, allowing the bees to pollinate flowers that were in season. A marriage contract has been found which states, "I take thee to wife... and promise to deliver to thee yearly twelve jars of honey."
The bee became the symbol of royalty in Lower Egypt where a temple known as “the House of the Bee” was visited by women seeking counsel. King Tut was buried with a jar of honey. When his tomb was opened, the jar of honey was found and the honey was unspoiled.


Many examples of bee and honey hieroglyphs have been found in ancient Egyptian records. 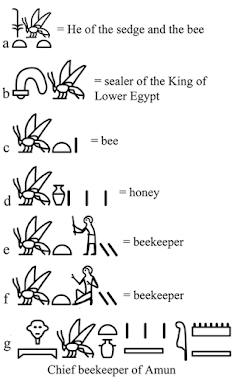 Indo-European languages have words for honey which are based on the two phonetically very similar proposed Proto-Indo European (PIE) roots: medu and melid. The name Melissa is related to the word for honey. The root is found in the Anglo-Saxon word "mead," an alcoholic beverage made with honey, water, and a fermenting agent. In Spanish, the word for honey is miel.

The biblical name Deborah is a reference to bees. Rebecca's nurse, Deborah, was buried near Bethel beneath the “tree of weeping” or the “Oak of Weeping" (Gen. 35:8). The Hebrew word allon can refer to a large tree species, but here probably refers to either an oak, a terebinth, or sycamore fig. There is evidence that graves were sometimes placed beneath fig trees which attracted bees. The wasp lays its eggs inside the ripening figs.