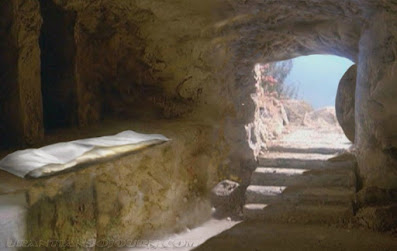 
When did belief in the resurrection of the body arise? In the Psalms and in the book of Job there is reference to bodily resurrection, and in Jesus' time the Pharisees held to the belief, but the Sadducees rejected the belief.
The earliest resurrection texts were prayers for the deceased kings. The people hoped for a righteous ruler who would rise from the dead and lead his people to immortality. These prayers were offered by the Horite and Sethtite priests of the Nile Valley. Though separate ritual groups, they shared common religious practices and beliefs, and they worshiped the same God and served the same king.
It is clear in the Ancient Egyptian Pyramid Texts (2400-2000 BC) that the Horites and the Sethites maintained separate settlements. Utterance 308 addresses them as separate entities: "Hail to you, Horus in the Horite Mounds! Hail to you, Horus in the Sethite Mounds!" 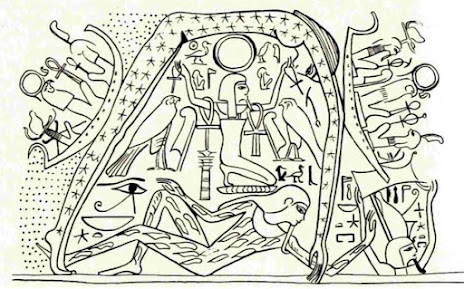 In the image above, the waters of the "firmament" are shaded. The High God (Re, meaning "Father") and his son Horus (shown as a falcon with a solar crown) move across the heavenly sea from east to west in the solar boat and enter the opening to the place of the dead. The opening is just above the head of the deceased pharaoh (bottom right). There Horus declares good news. A Horite hymn found at the royal complex at Ugarit speaks of Horus' descent to the place of the dead "to announce good tidings." Horus is also described as rising on the third day (The Ancient Pyramid Texts, Utterance 667).
The earliest textual evidence of belief in bodily resurrection is found in the Nilotic texts of these early Hebrew priests. They recited funeral prayers and performed rituals on behalf of the deceased kings in hope that the king would rise from the dead.
In his resurrection body the ruler is to "traverse the Mound of Horus of the Southerners" and "traverse the Mound of Horus of the Northerners" (Pyramid Texts, Utterances 536 and 553).

The risen king unites the peoples, restores the former state of blessedness, and joins heaven and earth. When seen from this perspective, the Horite Hebrew religion appears to be the foundation of the Messianic hope that is fulfilled in Jesus of Nazareth.
In the ancient world, the ruler-priest was regarded as the mediator between God and the people and he served as the principal spiritual adviser of the high king. If God turned His face away from the king, the people suffered from want and war. If the king found favor with God, the people experienced abundance and peace.

The king was to intercede for his people before God in life and in death. The king's resurrection meant that he could lead his people beyond the grave to new life. Great pains were taken to ensure that the ruler’s body was preserved in death. The royal priests were experts in the process of mummification. The king's burial was attended by prayers, sacrifices, and a grand procession to the royal tomb.

Heavenly recognition for the ancient Hebrew was never an individual prospect. Heavenly recognition came to the people through the righteousness of their King and ruler-priests. There was hope that the King would rise on the third day and lead his people to immortality. This processional language appears in reference to the Messiah, who has the power to deliver captives from the grave to the throne of heaven (Ps. 68:18; Ps. 7:7; Eph. 4:8). Paul speaks of Christ leading captives in his royal train.

The Sadducees rejected belief in life after death because that is how they interpreted the Hebrew Scriptures (Old Testament). They settled on this position because, as N.T. Wright points out, “resurrection from the beginning was a revolutionary doctrine" (The Resurrection of the Son of God, p. 138). The idea of an eternal kingdom of immortals under the rule of God rather than the Sadducees would have been extremely troubling to the ruling elites in Jerusalem.


Related reading: Righteous Rulers and the Resurrection; Gathered to His People; Burial Practices of the Rulers of Old; Heart Scarabs