Who Laid the Foundations of Science?


A reader of Biblical Anthropology has asked:

"Sages affirm that all antediluvian sciences originate with the Egyptian Hermes [Tehuti], in Upper Egypt (namely Khmunu (Hermopolis). The Jews call him Enoch and the Muslims call him Idris. He was the first who spoke of the material of the superior world and of planetary movements...Medicine and poetry were his functions... [as well as] the sciences, including alchemy and magic." [Cf. Asin Palacios, Ibn Masarra, p. 13],

Based on this evidence, is there a possibility that the second line of the inscription is referring to Enoch of the Bible?

Plato wrote that Nilotic scribes had been keeping astronomical records for 10,000 years. He should know since he studied with a priest in Memphis for 13 years, and knew about Earth's Great Year. This is the time of between 25,000 and 28,000 years that it takes for Earth to complete the cycle of axial precession. This precession was known to Plato who defined the "perfect year" as the return of the celestial bodies (planets) and the diurnal rotation of the fixed stars to their original positions. The ancients understood much more than we moderns recognize.

By 4245 BC, the priests of the Upper Nile had established a calendar based on the appearance of the star Sirius. Apparently, they had been tracking this star and connecting it to seasonal changes and agriculture for thousands of years. The priest Manetho reported in his history (c. 241 BC) that Nilotic Africans had been “star-gazing” as early as 40,000 years ago.

None of the advancements I listed above can be positively identified with a single individual. Instead they are connected to great rulers and their scribes, priests and metal workers. Enoch is a variant of Anak, and it is a royal title. The Anakim are identified as the "mighty men of old" in Genesis.

Keep in mind that royal names appear with more than one person, so it is difficult to identify which Enoch/Anak is referenced here. There is Enoch, the father-in-law of Kain and Seth; Enoch, the son of Kain (Gen. 4:17-18); and Enoch the father of Methuselah (Gen. 5:21-13). Likewise, there is Lamech the Elder (Gen. 4:18-24) and Lamech the Younger (Gen. 5:26-31); Esau the Elder and Esau the Younger; Joktan/Yaqtan the Elder and Joktan/Yaqtan the Younger, etc. Joktan is linked to the Joktanite clans of Southern Arabia (Mohammed's people).

To further complicate matters, we have seemingly conflicting claims about these great chiefs who built territories in the ancient world. Consider the case of Irad, Kain's grandson (Gen. 4:18). The name has these variants: Jared (Gen. 5::18-20) and Yared of Igbo history. Yared is the best rendering of the ruler's name as it has the distinctive initial Y - a solar cradle - indicating divine appointment by overshadowing. This is how it would have appeared among the Proto-Saharan Nilotic peoples. DNA studies have confirmed that the Igbo's ancestors came from the Upper Nile during the Africa Wet Period when the great water systems interconnected. However, many Igbo say that they have always lived at the confluence of the Niger-Benue rivers and that Yared was the founder of their writing system.

The late Igbo apologist, Dr. Catherine Acholonu, pointed out: "Sumerian texts say that the first city built by the gods on earth was called Eridu. There they placed the members of Adam’s family. Adam’s great grandson was named Yared, meaning ‘He of Eridu’, ‘person from Eridu’. Its Igbo equivalent, with the same meaning, is Oye Eridu. The father of Yared was Enosh/Enu-Esh. His name meant ‘Master of humankind’, for the first people were called Esh, Adam too was called Esh in vernacular Hebrew. In Sumerian this sacred word Esh means ‘Righteous Shepherd’. All Sumerian kings bore the title Esh. Equally in Igbo land Esh/Eshi/Nshi is a sacred word implying divine origins of the first people, who indeed were wielders of supernatural powers." (From here.)

Note that Dr. Acholonu's etymologies are irregular. The Hebrew generic word for man is ish. Therefore, she cannot make an explicit connection to Adam. Further, Eridu is Ur of the Idu, that is Ur of the red Horites living in Mesopotamia. 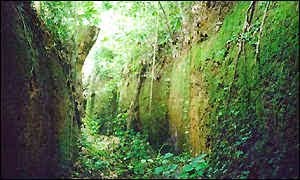 The Eridu in Nigeria is not nearly as old as the Eridu mentioned in the ancient Sumerian text above. However, it is the work of people connected to the Horites of the Bible. It is associated with the Ijebu who are called "Jebusites" in Genesis. Melchizedek was the Jebusite ruler-priest who attended to Abraham after Abraham incurred blood guilt in battle.

The modern day Jebusites/Ijebu of Nigeria live near and have close association with the modern day Edomites who are called Edo, who live in Benin. In Canaan, the Jebusites had close connections with the Horite Hebrew of Edom, who the Greeks later referred to as the red people of Idumea.

The Bible identifies Edom as an ancient seat of wisdom in Jeremiah 49:7. Abraham was a Horite Hebrew ruler in Edom. His territory extended on a north-south axis between Hebron (where Sarah resided) and Beersheba (where his cousin wife Keturah resided) and on an east-west axis between Engedi and Gerar. This means that Abraham controlled most, if not all, of the land of Edom. The rulers of Edom who descend from Seir the Horite are listed in Genesis 36. 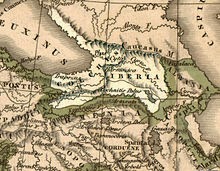 The Horite Hebrew ancestors represent the oldest known caste of royal priests (ha-biru/Hebrew) and their oldest known shrine was in Nekhen on the Nile. There they offered prayers to Horus, the Creator God's son, as the Sun rose in the east.

The Horites dispersed out of Africa into Mesopotamia, the Indus Valley, Cholcis, Iberia, and as far as Southern China. They were in service of the rulers of all the lands shown on the map. This includes modern Turkey, Georgia, and southwestern Russia. It is believed that it was from this region that the Horite ruler-priests of the Kushan moved into the Balkans, and from there to Ireland and the British Isles.


Related reading: Solving the Ainu Mystery; The Urhemiat of the Canaanite Y; Who Was Melchizedek?; Adam Was a Red Man; The Kushite-Kushan Connection; Why Nekhen is Anthropologically Significant