Killing and Dying to "Marry" Virgins 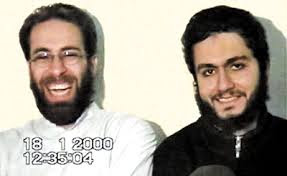 Fellow 9-11 conspirators Ziad Jarrah and Mohamed Atta laughing a year before the 2001 attack.


Who are the Houris mentioned in the Quran? Many Muslims believe they are buxom maidens to be enjoyed by martyrs in the afterlife. In a note to his fellow hijackers, September 11 ringleader Mohamed Atta reminded them of their impending "marriage in Paradise" to the 72 virgins mentioned in the Quran. Islamic extremists refer to suicide bombing as a "wedding to the black-eyed in eternal Paradise."

The German scholar Christoph Luxenberg says the "houris" with "swelling breasts" refers instead to "white raisins" and "juicy fruits" and are symbolic of the restoration of the lushness of Paradise. Luxenberg's research was featured in a Newsweek article titled "Challenging the Quran" on 28 July 2003.


Dr. Maher Hathout argues that Luxenberg is wrong about the Houris being raisins and fruits. Hathout explains, "It is his [Luxenberg's] prerogative but this does not provide anything supernatural to look forward to the life of eternity. It seems that what he was referring to as raisins is 'kawaib.' Dr. Hathout argues that the Arabic meaning of "beings with swollen breasts" refers to "beings of distinction."

Dr. Hathout is correct. The beings of distinction are mentioned in the Bible. They are designated by the bi-consonantal root HR in the Arabic word Houris. There are no written vowels in Arabic and Hebrew. Before Islam, this ancient root HR referred to Horite/Horus/Hur. The root HR corresponds to the words Horite (English) and Horim (Hebrew). It appears that Jews and Muslims are drawing on some shared older tradition. The Horite Hebrew priesthood is older than both Judaism and Islam by thousands of years.

The Horite rulers are described as "mighty men" and heroes. They are portrayed as deified rulers, men of wisdom, and members of the heavenly council.

In Revelation 15:2 we read that seven angelic beings (Horim?) come out of the temple to pour out the wrath of God upon the earth from seven bowls. Some Bible scholars have noted that these servants are vested as priests.

Revelation 20 speaks of 24 rulers who sit on thrones and who will judge the world for 1000 years. These are "them that were beheaded for their witness of Jesus, and for the word of God." Revelation 20:6 describes them as "priests of God and of Christ."

Horite rulers and judges are called "elohiym" because they reflected the divine majesty and power. Numerous passages in Exodus use elohiym in this sense:

Exodus 4:16 -“Moreover, he [Aaron] shall speak for you [Moses] to the people; and it shall come about that he shall be as a mouth for you, and you shall be as gods [elohiym] to him.”

Exodus 7:1 - Then the Lord said to Moses, “See, I make you as gods [elohiym] to Pharaoh, and your brother Aaron shall be your prophet.”

It appears that given a Muslim's sexual preference, both virgin girls and boys are motivation to be martyred. In popular Islam, both are believed to be at the service of martyrs in Paradise. The big breasted, beautiful eyed, golden hair and fair skin women have a counterpart in the tender aged (Khudam) servant boys with skin like pearls.

Here are the references in the Quran to the eternal servant boys:

There will circulate among them [servant] boys [especially] for them, as if they were pearls well-protected. (52:24)

There will circulate among them young boys made eternal. (56:17)

There will circulate among them young boys made eternal. When you see them, you would think them [as beautiful as] scattered pearls. (76:19)

Servant boys from Horite Hebrew families served the Horite ruler-priests. Samuel was a young boy who served the High Priest Eli. It was not unusual for children to be dedicated to the temple where they lived as servants.

One theory about Mary is that she was a dedicated temple virgin whose duties included drawing water and weaving. The connection between the Virgin Mary and weaving is found in non-canonical books. The Gospel of Pseudo-Matthew (chapter 9) describes how Mary and other virgins were spinning thread in the Temple compound. Carrying a pitcher, Mary went out to a fountain where the angel said to her, "Blessed art thou, Mary; for in thy womb thou hast prepared an habitation for the Lord." The next day the angel appeared to her again while she is spinning.

Related reading: The Shock of Mohammad Atta's Afterlife; The Horite High Places and Mounds; The Mighty Men of Old