Amram fathered at least three sons and a daughter by two wives. The daughter was named Miriam/Miryam. The name is related to the Egyptian word for love - mer. The Anglicized form is Mary. The Talmud (Sanhedrin 69b; Sotah 11b) states that Miriam married Caleb and their son was called Hur, a Horite Hebrew name. Caleb and Hur are related to the Horite Hebrew of Bethlehem. Hur is called the "father of Bethlehem" in I Chronicles 4:4.
As Amram had two wives, Miriam was probably not his only daughter. One daughter born to his cousin wife Ishara might have been called Shelomith. However, 1 Chronicles 23:18 says that Shelomith was Ishara's first son. The name is problematic because there are eight people by that name in the Old Testament, 5 men and 3 females.

This two-wife marriage custom is typical of the marriage and ascendancy pattern of the Horite Hebrew ruler-priests. We find the custom with Lamech the Elder (Gen. 4), Terah, Abraham, Esau, Jacob, Amram, Moses, Caleb, Ashur, Joash, and Elkanah. 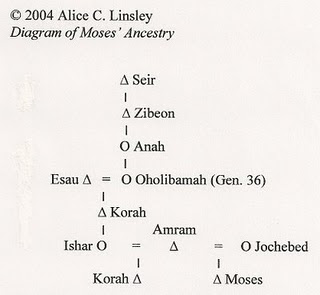 Many Horite Hebrew rulers had two wives. Abraham's were Sarah and Keturah. Amram's wives were Jochebed and Ishara. Moses married a "Kushite" bride (his half-sister) and a Midianite bride, Zipporah (his patrilineal cousin). Samuel's father Elkanah married Penninah and Hannah.

The evidence of kinship analysis indicates that Jochebed was Amram's half-sister, not "his father's sister" as claimed by some on the basis on Exodus 6:20, Numbers 3:19). Cousin in Hebrew is בן דוד (ben-dod) for men and בת דודה (baht-doh-dah) for women. Anthropologically, dodatho and dohdah may refer to a close "cousin."
In 1 Samuel 10:14 and Leviticus 10:4 דוד dod signifies an uncle. It can also signify an uncle's son: compare Jeremiah 32:8 with Exodus 6:12, where the Vulgate renders דדי dodi as patruelis mei, my paternal cousin. In Amos 6:10, for דודו dodo, the Targum has קריביה karibiah, meaning a near relation.

Amram's second wife was Ishara, the daughter of Korah the Elder. Her first-born son was named Korah, after her father, following the early Hebrew practice of the cousin bride naming her first born son after her father. Korah the Younger belonged to the household of Korah the Elder, not to the household of his biological father. This is typical of the marriage and ascendancy pattern of the Horite and Sethite Hebrew.

It appears that all Amram's children were born in Egypt. They were Horite Hebrew, a caste of priests dedicated to God Father and God's son called Horus (from ancient Egyptian HR, meaning Most High or Hidden One). Some of the Horite Hebrew rulers are listed in Genesis 36. They are associated with the high places in Edom. Horite high places were found in many regions of the ancient world. In the Pyramid Texts (2613-2181 BC) these elevated shrines and temples are called "Horite mounds."

Amram's means "the people are exalted"or "exalted among the people." This refers to Amram's high status and the high regard in the ancient world for the Horite Hebrew priests. They were known for their strict devotion to the High God and his son, and for their purity and sobriety. Herodotus observed II:37:

Likewise, Plutarch noted that the “priests of the Sun at Heliopolis [biblical On] never carry wine into their temples, for they regard it as indecent for those who are devoted to the service of any god to indulge in the drinking of wine whilst they are under the immediate inspection of their Lord and King. The priests of the other deities are not so scrupulous in this respect, for they use it, though sparingly.”

Amram's father was Kohath. He also was a priest. One of Amram's sons has the priestly name of Korah. "Korah" refers to a priest who shaves his body as part of a cleansing ritual in preparation for his time of service in the temple or shrine. Korah, a son of Ishar/Izhar, is mentioned in Numbers 16:1.

Jews pose Aaron as the founder of the Jewish priesthood, but the roots of the Hebrew priesthood are found much earlier. They are found in ancient Egypt and in Edom. In fact, Aaron was buried in Edom, one of the territories ruled by the Horite Hebrew. 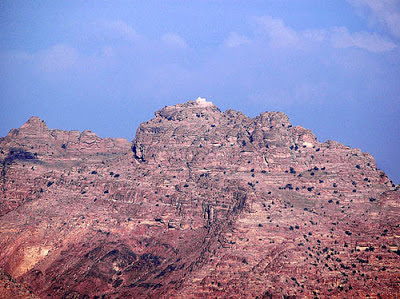