Twin Cities of the Ancient World


Ancient royal settlements were built on major waterways on opposite sides of the river. This binary feature has been noted by scholars who refer to the paired settlements as "twin cities" (See, for example, Petr Charvat, "A Tale of Twin Cities: Archaeology and the Sumerian King Lists"). Charvat notes that the compiler(s) of the Sumerian King Lists appear to have regarded Uruk, Ur and Kish to be the three seats of legitimate royal authority in Sumer, and all three began as twin cities.


The twin cities had shrines, temples, palaces, and treasuries. These edifices of stone were characterized by many columns or pillars. The glyph for pillar looks like the letter i. Meroe on the Orontes was known as IO and its twin Anti-Meroe, on the opposite side of the river, was called AntIO (Antioch).

The cities were served by royal priests who maintained the shrines and temples, and assessed taxes on cargo that moved along the waterways. To insure that no ships passed the royal cities without paying the required tribute, the rulers built twin cities on opposite sides of the river.

Nekhen and Nekheb (Elkab) were famous twin cities on the Nile. These were built on opposite sides of the river: Nekhen on the west side, and Nekheb on the east side. The tomb of Horemkhawef in Nekhen and the tomb of Sobeknakht in Nekheb were painted by the same artist. Hormose, the chief priest of Nekhen, requested material goods from the temple at Nekheb for use at the temple at Nekhen. The Greeks called the shrine of Nekhen "Hierakonpolis," which means "city of priests." The Greeks called Nekheb "Eleithyiaspolis," which means "city of the one who aids in childbirth."

Nekhen is called the Falcon City, as the falcon was the animal totem of Horus, the son of God Father, Re. (Re in ancient Egyptian means "father.") Votive offerings at the Nekhen temple were ten times larger than the normal mace heads and bowls found elsewhere, suggesting that this was a very prestigious shrine. Horite Hebrew priests placed invocations to Horus at the summit of the fortress as the sun rose.

Nekhen was a major city on the Nile, with an estimated population of between 15,000 and 10,000. It was a bustling city with markets, breweries and fishing. The city stretched nearly 3 miles along the edge of the Nile floodplain. At Nekhen we find all the evidences of an advanced civilization in the Nile Valley before the emergence of Egypt. These features include city building, written communication, hierarchical social structure, ritual burial, ship building, river trade, and complex religious expressions.

Renée Friedman, who has direct knowledge of the excavations at Nekhen, has written that the "evidence of industrial production, temples, masks, mummies, and funerary architecture as early as 3500 B.C. is placing Hierakonpolis at the forefront of traditions and practices that would come to typify Egyptian culture centuries later. These discoveries may have knocked Narmer and his palette off their historical pedestal, but they confirm the central role the city played in the long development of Egyptian civilization. It is little wonder that for millennia the deified early kings of Hierakonpolis, called the Souls of Nekhen, were honored guests at the coronations and funerals of all pharaohs."

Nekhen and Nekheb are the oldest known Horite Hebrew shrine cities, dating to about 3600 BC. The Nekhen News (p. 7) reports, "The vast majority of hair samples discovered at Nekhen were cynotrichous (Caucasian) in type as opposed to heliotrichous (Negroid)."


One of the more intriguing discoveries at Nekhen was the recovery of an almost complete beard in association with the redheaded man in Burial no. 79. The facial hair of the man in Burial no. 79 had been trimmed with a sharp blade. The presence of long wavy natural red hair and a full beard suggests that this individual may be of the same ethnicity as the red haired Ur-David mummy (1900 BC) buried in a pyramid in the Tarum Valley of China. There may also be a relationship to the red-haired Amurru (Amorites?) who lived at the northern border of Egypt's ancient empire. 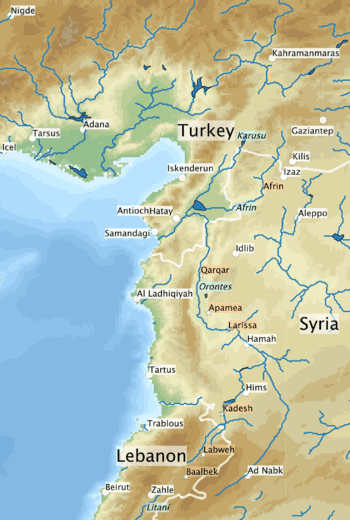 Meroe on the Orontes was about 2800 miles from the shrine city of Meroe on the Nile. Both were under the control of the ancient sea-faring Egyptians who built sea-worthy ships. The Orontes was also called the Draco because, like the Nile, it flows north, the direction identified with the polar star. When the fortress at Meroe was build, around 4000 years ago, the north pole star was seen near Alpha Draconis in the constellation of Draco. A relatively inconspicuous star in the night sky of the Northern Hemisphere, it is significant as having been the north pole star from the 4th to 2nd millennium BC.

The Draco was the chief river of the Levant, and had sufficient depth for sail boats to come up the river from the Mediterranean.

Meroe was the farthest outpost of the Egyptian Empire and at its peak the city would have had Amurru. Amurru is the name of the northernmost district of Egypt's empire and it included the coastal region from Ugarit to Byblos. The Orontes marked the northern boundary of Amur-ru. Meroe on the Orontes was one of the northern-most Egyptian outposts.

It is interesting that the Amurru are described as having the same physical traits as the mummified ruler buried of Nekhen (burial 79). According to the Assyriologist Archibald Sayce: "The Amorites… were a tall, handsome people, with white skins, blue eyes and reddish hair..." (The Hittites, 1889). Tomb No. 34 at Thebes, belonging to the Eighteenth Dynasty (c. 1550-c. 1292), illustrates a bearded Amorite chief with fair skin and red-brown hair.

The shrine city of Meroe was called IO. Many shrine cities were identified with the I (i) which presents a pillar. The pillar symbol is found in the names of other ancient shrine cities such as Ianna and Iunu.

The royal city of Heliopolis on the Nile was called “Iunu” (iunu) which means "place of pillars." In the book of Genesis this city is called On. Joseph married the daughter of the priest of On. Here is the hieroglyph for the shrine city of On/iunu on the Nile:

Meroe on the Orontes was a high place about 1600 years before Antioch (Antakya, Hatay) became a Greek city in 307 BC. Antioch became the more important city, with 500,000 inhabitants by the 2nd century AD. It was in Antioch that the followers of Jesus Messiah were first called "Christians."

Related reading: The Shrine City of Nekhen; Why Nekhen is Anthropologically Significant; The Ancient Egyptians Were Seafaring; Sun Cities of the Ancient World; Phillip John Turner, SETH –  A Misrepresented God in the Ancient Egyptian Pantheon?
Posted by Alice C. Linsley at 1:12 PM