I am a naturalist who believes in miracles. People sometimes ask how I can be both.

There are natural explanations for many of the miraculous events recounted in the Bible.

In Exodus 9, we read that the Egyptians developed boils, skin inflammation, and the cattle were dying due to a bovine disease, possible anthrax. The boils likely developed from drinking the Nile water turned toxic from a red algae bloom. The skin irritation appears to be linked to volcanic ash (Ex. 9:9), and anthrax can be triggered by changes in moisture, soil nutrients, and sugars.

There are conceivable natural explanations for the plagues in the order they occur and the results, but only the Creator can make these things happen at exactly the time Moses declared them to happen.

Walking rocks is an example of a natural phenomena. The Bible tells us that the people with Moses drank “from the spiritual rock that followed them” during their wilderness wanderings. This is an example of something natural that is understood spiritually. What makes this miraculous is the providential timing.

Scientists have observed "walking rocks" in various deserts, among them Death Valley and the Atacama Desert in Chile. The phenomena is so common in the Atacama that the Atacama is referred to as a "rock tumbler." The movement of rocks happens under certain conditions at former lake beds where there is underground water. The underground water acts as a lubricant, resulting in surface movement when there is a small tremor or an earthquake.

The same conditions which move stones can move bones. In July 2013, movement of cattle skeletal remains was noted across the surface of Smith Creek Valley Playa in central Nevada.

How the Israelites found water in the wilderness has a natural explanation also. In stone deserts the rocks that hold water usually have a darker color called "desert varnish." Lichen and cushion plants grow on these rocks. The fine roots penetrate rock crevices and absorb the capillary water retained by the dark sandstone. People accustomed to deserts know to look for water in these places. The rocks are easier to split because they have natural crevices. One need only strike the rock in the right way and it will crack open.

In Exodus 17:5-7 we read that the Lord told Moses to “Go out in front of the people. Take with you some of the elders of Israel and take in your hand the staff with which you struck the Nile, and go. I will stand there before you by the rock at Horeb. Strike the rock, and water will come out of it for the people to drink.” So Moses did this in the sight of the elders of Israel. And he called the place Massah and Meribah because the Israelites quarreled and because they tested the Lord saying, “Is the Lord among us or not?”

What makes this event miraculous is the timing. Miracles do not represent an overthrow of the divinely established laws of nature. Miracles are a clear divine response to a specific need at the greatest moment of need. This is the nature of prophesy also. Prophets deliver a word from God to the community at a time of crisis. (The greater miracle is when the community heeds the prophetic word!)

Consider the account of the Nile waters turning to blood. In Exodus, God commanded Moses to “stretch out thine hand upon the waters of Egypt … that they may become blood.” There are times when the Nile looks like blood due to the proliferation of a certain type of algae. This satellite photo taken by the European Space Agency's Sentinel-3A satellite shows the Nile River colored blood red from an algae bloom. 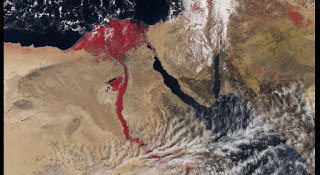 What makes the plagues of Egypt miraculous is the timing. The Pharaoh and his men prayed at the Nile each morning (Exodus 7:15, 8:16). Moses was told to meet the ruler there. He was to declare the Lord's message to let the Hebrew go three days journey into the wilderness to hold a religious feast (Exodus 5:1-3). The consequence of ignoring the Almighty's order would be a bloody Nile. When the Pharaoh refused, Moses struck the water and at that moment the most powerful ruler on earth beheld the bloom spreading. The king may have been skeptical because algae blooms were known to happen, but the perfect timing would have given him pause.

One of the themes of Exodus is providential timing. When Pharaoh asks Moses to "Entreat YHWH to take the frogs away...," Moses asks the king, "When would you like for me to pray...?" Pharaoh replies "tomorrow" and the frogs leave the houses of the Egyptian the next day. Likewise, Moses tells the King when to expect the hail... this time tomorrow (Ex. 9:18).

Today we meet skeptics like Pharaoh at every turn. They are quick to dismiss the Bible as a book of myths and superstitions. They offer natural explanations for biblical events, but ignore the providential nature of these events. Their minds are not open to the mysteries that lay beyond scientific explanation.

Rocks move in the wilderness. Water can come from desert rocks. The Nile can turn blood red. The story does not end there. These events occur exactly when God's people need them to occur. The Christian has a more open mind. We are able to accept natural explanations and still recognize that God is at work. Miracles and natural phenomena are not mutually exclusive, and science does not have all the answers.