The Antiquity of the Edomite Rulers 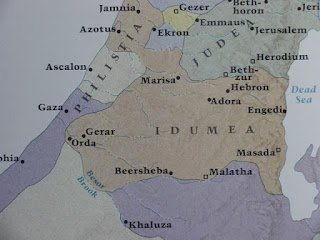 Note that both Hebron (where Sarah lived) and Beersheba (where Keturah lived) are in Idumea or ancient Edom. Abraham's territory extended on a north-south axis between the settlements of his two wives and was entirely in the region the Greeks called Idumea. Idumea means "land of red people" and Esau is described in Genesis has having a distinctive red skin tone, typical of the Edomite rulers. The words Edom and Adam both relate to the word dam/dm - blood, and signify the color red.

Even the hills of Edom appear red due to the iron deposits. Deuteronomy 8:9 describes Edom in these words: "A land whose stones are iron and out of whose hills you can dig copper."

Edom was ruled by Horite kings. Seir the Horite is listed in Genesis 36 as one of the Edomite kings. He was a contemporary of Esau the Elder.

In this diagram of the Edomite rulers listed in Genesis 36 we see that there were two chiefs named Esau. Esau the Elder married Adah. Esau the Younger married Oholibamah.

Jeremiah refers to Edom and Teman of Edom as seats of wisdom. The prophet writes: Concerning Edom: This is what the Lord Almighty says: 'Is there no longer wisdom in Teman? Has counsel perished from the prudent? Has their wisdom decayed? (Jeremiah 49:7)

The wisdom to which Jeremiah refers is that of the Horite ruler-priests who were renown in the ancient world for their wisdom and skill at metal work. The Horites were a caste of royal priests and sages who were devotees of Ra, Horus and Hathor. Hathor was the patroness of metal workers. The word "Horite" is the English variant of the word Horim, the term Jews use when speaking of their ancestors.

Timna or Tema plays an important role in early Biblical history. Known by Arabs as Taima, this water source lies about 70 miles north-east of Dedan. During the Chalcolithic Period, Kushite artisans lived here in subterranean dwellings carved out of the limestone with metal tools. The Bible refers to these cave-dwellers as Dedanites. Dedan, Tema and Buz comprized a Horite confederation. Rock drawings from the 13 century BC have been found at Timna.


Timna is the site of 6,000 years old mines. The oldest mines were worked almost continuously until the Roman Period. There are ancient rock carvings showing warriors in chariots, holding axes and shields. A temple dedicated to Hathor was discovered at the southwestern edge of Mt. Timna by Professor Beno Rothenberg of Hebrew University.

The Chalcolithic metal works at Timna were found at the Wadi Nehushtan in the foothills along the western fringe of the southern Arabah Valley. The smelting works, slag and flints at this site were found to be identical to those discovered near Beersheba where Abraham spent much of his time. The metal workers of Timna and the metal workers of Beersheba were kin and the patroness of their mining operations was Hathor, the mother of Horus, who the Horite venerated. Hathor's temple there dates to 1318-1304 BC. In the temple courtyard there was a workshop for casting copper figurines as votive offerings.

In his book Timna, Rothenberg concluded that the peoples living in the area were "partners not only in the work but in the worship of Hathor." (Timna, p. 183)

The wisdom of the Horites extended to medicine, astronomy, commerce, navigation, natural sciences, metal work, stone work, architecture, and writing. They were wise men, prophets and scribes. The term "Nabatean" is derived from the name Naba or Nabu, the guardian of scribes and prophets. The cult of Nabu was introduced into Mesopotamia and Babylon by the Kushites. Some Kushite kings bore the name Nabu, as with Nabu-shum-libur, an early Kushite king in Babylon, and Nabu-aplu-iddina. The Hebrew word nabi, meaning prophet is related.

Genesis 36 speaks to the antiquity of the Edomite rulers

An archaeological survey in the early 2000's, led by Dr. Thomas E. Levy, yielded early dates than had usually be assigned to the Edomite culture. The team uncovered scarabs, ceramics, metal arrowheads, hammers, and grinding stones and found slag heaps.

Edom had a large copper ore zone with industrial scale copper production. Radiocarbon analysis of charred wood, grain and fruit in several sediment layers revealed two major phases of copper processing, first in the 12th and 11th centuries, and later in the 10th and 9th BC.

Evidence was found of the construction of fortifications and over 100 building complexes. Khirbat en-Nahas is 30 miles north of Petra in Jordan. Khirbat en-Nahas means "ruins of copper" in Arabic. Nahash means serpent in Hebrew. As an adjective it means shining bright, like burnished copper. Khirbat en-Nahas was one of the first ancient occupation sites in the Edomite lowlands to be investigated. The ruins spread over 24 acres, and the fortifications enclose an area 240 by 240 feet.

Dr. Levy stated, "Only a complex society such as a paramount chiefdom or primitive kingdom would have the organizational know-how to produce copper metal on such an industrial scale."


The 400-acre Edomite complex at Petra reflects Horite beliefs. At Petra we find the same pillared architecture of the Horite shrines of the Nile. The first ruler of Petra, Obodas, took his name from the Edo/Edomite name for ruler which is Oba.

The mysterious Shasu were related to the Horites of Edom and according to monument inscriptions in Nubia, they called upon the God YHWH.  Lists of place names in Nubian temples of Soleb and Amara West record six toponyms located in “the land of Shasu.” A monument of Ramesses II claims that he “has plundered the Shasu-land, captured the mountain of Seir” in Edom; a 19th Dynasty letter mentions “the Shasu-tribes of Edom” and Ramesses III declares that he has “destroyed the Seirites among the tribes of the Shasu.” Clearly, the Egyptians regarded the Shasu as a prominent part of the Edomite population which is described in Genesis 36.