The Messianic Symbolism of the Horned Altar 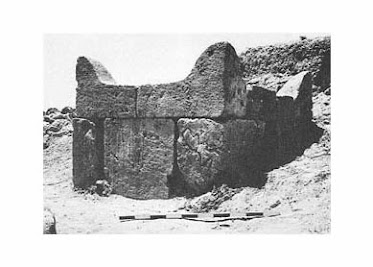 This horned altar was excavated by a team led by Yohanan Aharoni in 1973 at Beersheba. The photograph is of the original reassembled altar when it was still at the site. Beersheba is where Abraham spent his last years. This altar was constructed about 1000 years after Abraham's time.

Before 1000 B.C. the Horite and Sethite Hebrew priests had dispersed out of the Nile Valley into Canaan, Mesopotamia, and Anatolia. They had a custom of building stone altars with horns along the Nile. The space between the horns was a negative (apophatic) solar image representing the High God. In ancient Egyptian tst represented horns or a horned animal.

In this article we explore the biblical data surrounding horned altars.

Exodus 27:2 gives this instruction for the construction of a horned altar by the Israelites (Jacob's clan). 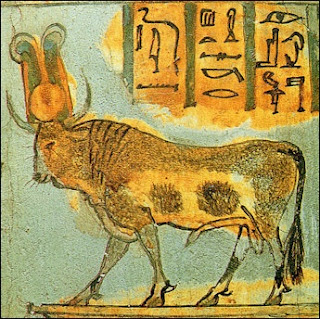 Psalm 118:27 describes the procession to the horned altar in preparation for the sacrifice.
The LORD is God, and he has given us light. Bind the festal procession with branches, up to the horns of the altar.

According to the Pyramid Texts the Great Bull smites the enemies of his father Ra (Utterance 205). This is expressed again in Utterance 388: "Horus has shattered (tbb, crushed) the mouth of the serpent with the sole of his foot." Those words are echoed in Genesis 3:1, the first messianic prophesy of the Bible.

Golden bull found in King Tut's tomb
The bull is to be sacrificed so that the deceased king may eat the foreleg and haunch in the heavens (Pyramid Texts, Utterance 413). By forbidding the consumption of the thigh tendon attached to the hip (Gen. 32:32) Judaism distances itself from the Faith of the early Hebrew who believed in God Father and God Son. Judaism is not the Faith of Abraham the Hebrew.

The king is urged to rise, to "gather his bones together, shake off your dust" and enter into immortality. By eating the sacrifice, the deceased king becomes one with the sacred bull. The Eucharist echoes this ancient belief that the believer becomes one with Messiah when partaking by faith.
The early Hebrew believed that the rising of a righteous ruler would bring salvation to the people. Heavenly recognition for the early Hebrew was never an individual prospect. Heavenly recognition came to the people through the righteousness of their ruler-priest. The ascending king would lead his people to immortality.
In the Coffin Texts, the king is to be immortal in his flesh, expressed by his eating and drinking. The kmhw bread of Horus which I have eaten" (Pyramid Texts, Utterance 338) is the food of immortality. The Egyptian word km means to bring to an end, to complete, or fulfill, and hw refers to the heavenly temple or mansion of the firmament above. The Akkadian variant is khenfu cakes which are mentioned in the ancient Code of Ani.

It appears that the "kmhw bread of Horus" is what the Church Fathers regard as the Bread which is the medicine of immortality and the antidote against death. Horus is the Greek for the ancient Egyptian HR, meaning Most High One.

Concerning himself, Jesus said that "unless you eat the flesh of the Son of Man and drink his blood, you have no life in you. Whoever feeds on my flesh and drinks my blood has eternal life, and I will raise him up on the last day" (John 6:53-54).
Related reading: Belief in the High God; The Sky Bull as a Messianic Image; Sky Bull Eaten to Gain Immortality; Righteous Rulers and the Resurrection; Funerary Rites and the Hope of Resurrection
Posted by Alice C. Linsley at 11:21 AM