Belief in the High God 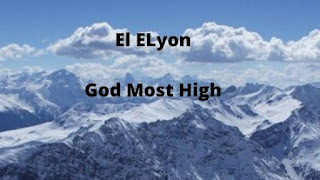 Before the Axial Age (8-3 century BC), belief in a supreme High God was nearly universal. This concept of God is found among peoples of Africa, the Americas, the South Pacific, northern Asia, Europe, the Middle East, and Australia.

In many early religious traditions, the High God was viewed as the King over a group of lesser deities or spiritual powers. This is called Henotheism.

In dualistic religions the High God has an evil adversary who rules over the lower realms.

The early Hebrew associated the High God with the Sun. Their influence was felt from central Africa to Mesopotamia and Anatolia, and as far as the Indus River. The High God was called Ra (meaning "Father" in ancient Egyptian) and his son was called HR (Greek: Horus). In ancient Egyptian HR means "Most High One" or "Hidden One."

The Mesopotamian equivalents of Ra and Horus are Anu and Enki. That Enki is the son of God is evident from ancient texts such as this one: "Enki, the king of the Abzu, justly praises himself in his majesty: 'My father, the king of heaven and earth, made me famous in heaven and earth." (See section 61-80)

In the early 2nd millennium BC version of the Atrahasis Epic, Anu is described as both father and king. “Anu their father was king.” (S. Dailey. Myths from Mesopotamia: Creation, the Flood. Gilgamesh and Others; Oxford University Press. 1989, p. 9.)

Likewise, Horus was said to recognize his father in the king. "Horus is a soul and he recognizes his Father in you..." (Pyramid Texts, Utterance 423)

Belief in God Father and God Son appears to be rare among the religions of the ancient world. It is the distinctive perspective of the early Hebrew and is likely the result of divine revelation.

What follows is a limited list of populations that believe in a High God.


Among the early Persians the High God was called Ahura Mazda.

In early Vedic tradition, the High God was called Indra.

In Greco-Roman culture, the High God was called Zeus or Jupiter.

Among the Norse, the High God is called Thor or Odin.

Among the Samoyeds of northern Eurasia, the High God is called Num.

Among the Mongols the High God is called Tengri.

In China, the High God is known at Tian or Shangdi.

Among the Polynesians the High God is called Tangaroa.

Among the Inuit the God associated with the Sun is called Akycha and the High God is called Agunta or Tomgarsuk.

The Haida call the High God Sha-lana. He rules high in the clouds. In their creation story, Sha-lana looked down on a vast sea that stretched in all directions.

Among the Sioux the High God is called Wakan Tanka.

Among the Incas the High God is called Inti.

Among the Gikuyu of East Africa the High God is called Murungu.

Among the Igbo of Nigeria, the High God is called Chukwu.

The San called the High God Kaang and many stories about Kaang involve resurrection.

Among the Shilluk of Sudan the High God is called Juok or Jok.

Among the Oromo of East Africa, the High God is called Waaq.

Among the Fang of Central Africa, the High God is called Nzame.

Among the Luo of East Africa, the High God is called Lacwec. Some Luo use the term "Jachwech" which some believe is related to the Hebrew YHWH.

Among the Somalians, the traditional name for the High God was Eebe, and Eebe's messenger was Huur/Hur. The name Hur corresponds to the ancient Egyptian word HR (Horus). In the Egyptian Book of the Dead, Horus is called the "advocate of his father" (cf. 1 John 2:1), and all the gods are said to be "in the train of Horus." Here we find the language of a royal procession such as this: "When He ascended on high, He led captives in his train, and gave gifts to men.” (Eph. 4:8).

God and His Son

Belief in God Father and God Son appears to have originated among peoples living in Africa. If we look to Africa, we find many stories that explain how the distance between God and Man came to be. These involve the withdrawing of God from earth. Consider the following story related to anthropologist Charles Kraft while he was studying tribal peoples in northern Nigeria. Kraft asked, "What did your people believe about God before the missionaries came?" In response, an old chief told this story:
"Once God and his son lived close to us. They walked, talked, ate, and slept among us. All was well then. There was no thievery or fighting or running off with another man's wife like there is now. But one day God's son ate in the home of a careless woman. She had not cleaned her dishes properly. God's son ate from a dirty dish, got sick, and died. This, of course, made God very angry. He left in a huff and hasn't been heard from since. (Charles Kraft, Christianity in Culture. Orbis Books, 1990, p. 153)
Some African stories speak of a time at the beginning when the sky was lower; the heavens closer to earth. The people had to take care while cultivating or pounding grain to not strike God's place with their hoes or pestles. The Akan of Ghana tell the story of how God once lived on earth, but an old woman kept striking him with her pestle. Then one day, God withdrew to the sky."

Another African story tells how "in the beginning death had not yet entered the world. There was plenty to eat, but a women became greedy and tried to pound more grain that she was allotted. This required using a longer pestle. When she raised it to pound the grain, it struck the sky and God became angry and withdrew far into the heavens. Since then, people must toil the earth, death and disease troubles the people and it is no longer easy to reach God." (Richard Bush, ed. The Religious World. MacMillan Publishers,1982., p. 38).
The Good News is that the distance has been bridged by the Son of God who came into the world, fully human and fully God.

Related reading: The Oldest Known Religion; Hebrew at the Ancient Sun Cities; The God of Genesis; The Sun and Celestial Horses; The Sky Bull as Messianic Image