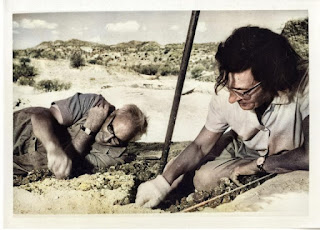 Mary Leakey and Louis Leakey at Olduvai Gorge in Tanzania.

"Current findings on human evolution have brought us to the position where much of what we believed to have theoretically happened proves to be incorrect. Much that is in the textbooks, much that is still being taught in universities about human evolution is no longer true, but it continues to be taught because the implications of recent discoveries are insufficiently understood.

It was principally Weidenreich, Le Gros Clark, and a few of the people of that generation, just previous to mine, who put forward and strongly defended the idea that man had gone through a very simple series of stages of evolution: the pongid stage, an Australopithecine stage, a Pithecanthropus stage, and then man as we know him today. Theoretically, this had always seemed highly unlikely to some of us, since it meant that man had done something which no other mammal had done: evolved in a single straight line instead of having one main branch, with many experimental side branches which failed to make the grade. Yet the old theory persists. Linked with it is the concept, still very, very widely taught and very widely believed, that man in the relatively near past was at a pongid or ape stage of evolution. In such a very short time, three or four million years, as the books and many of my colleagues put it, we are supposed to have lost our huge canine teeth, lost our simian shelves, lost our long, brachiating arms, ceased to dwell in the trees, and many other similar but, I fear, erroneous concepts. These were theories which in the light of current facts no longer stand up."

Leakey, L. S. B. 1967. Development of aggression as a factor in early human and pre-human evolution. Pp. 1-34 in Carmine D. Clemente and Donald B. Lindsley, eds., Aggression and Defense, Neural Mechanisms and Social Patterns. University of California Press, Berkeley, CA.

Related reading: Many Groups of Archaic Humans; Facts About Human Origins; Genesis Has No Evolutionary Framework; Spinners of Evolutionary Fictions