The Cult of Asherah

The term "Asherah" appears forty times in the Hebrew Bible and yet the exact nature of this term is unclear. Sometimes the Asherah is a pole, a carved post, a pillar, a sacred grove, a goddess, or a cult object. Some biblical rulers tolerated and even encouraged the Asherah cult. Others opposed it. But what exactly were they opposing?

Perhaps the ambiguity is purposeful and intended. The Asherah cult was not contained in Jerusalem and was not easily controlled by the Jerusalem elite who discouraged local and regional shrines. They sought to boost the prestige of the Jerusalem Temple as a symbol of Jewish identity, especially after the Babylonian captivity.

However, earlier in Israel's history, an Asherah statue stood in Solomon's temple. When Rehoboam came to the throne, Maacah, his wife and the queen mother, became the royal patron of the cult. Asherah's statue stood within the Jerusalem Temple throughout Rehoboam's reign and throughout the short reign of his son, Abijah.
There is a long-standing custom of royal women holding office as the protectors of sacred shrines. Sargon (reigned c. 2334–2284 BC) appointed his daughter Heduanna as the "En" of the shrine at Ur. The Akkadian term En means lord, master, royal official, priest or priestess. En-Heduanna served the Creator God Anu, at the house/shrine (pr) of Anu. As with Roman Catholic nuns, she would have been considered “married” to the deity she served. En-Heduanna is credited with a large body of cuneiform poetry.
In ancient Egypt, some royal daughters were appointed to the positions of the God’s Wife (Hemet Netjer) and the Divine Adoratrice (Duat Netjer). These offices were held by women of high social rank, like the queen’s mother, or the wife of the high priest of the most favored royal temple. Ahmose I (r. 1550-1525 BC) appointed his principal wife to the office of the God’s Wife of Amun, and he endowed the office with financial resources, servants, real estate, and provided a royal retinue fitting the wife of Amun.
The powerful influence of the royal mother is evident in the story of Bathsheba appearing before her son, King Solomon. When Bathsheba went to speak to Solomon on behalf of Adonijah, the king stood to greet her, bowed down to her and sat down on his throne. He had a throne brought for the king's mother, and she sat down at Solomon's right hand. (1 Kings 2:19)
Different titles appear in ancient texts for women of such high status. Gebirah is a title ascribed to several queen mothers of Israel and Judah. Maacha is called gebirah (“great lady”) and she is associated with the goddess Asherah. Asherah is likely a reference to Hathor who was venerated by the Horite and Sethite Hebrew, but this practice was problematic for Jews who rejected the belief in God Son.

Ash holding the royal scepter with the Horus totem.
Some women attained high rank as royal officials (sometimes termed "priestesses") in charge of Hathor shrines. The shrines were located at sources of water such as rivers, oases, or wells in sacred groves. This suggests that the term Asherah is related to the Egyptian deity Ash, the protector of those who traveled the trade routes between the Nile and Mesopotamia. He was the guardian of oases.
The archetypal queen mother is Hathor, called Ashratu in Mesopotmia. Ashratu and Asherah are related to Ash, the Sethite Hebrew deity of water shrines.
Another title for royal ladies who served at water shrines is rabitu. Ra-bitu is from the Akkadian words for water (raatu) and house/shrine (biitu). The emblem of the rabitu was the spindle. In the Ugaritic mythology of Elimelek the queen mother holds the title "ra-bitu" and her emblem is the spindle.
According to Tradition, the Annunciaton took place when Mary went to the Temple well. Mary is shown in some icons holding a spindle. The King's Mother is a type of the Virgin Mary, who is crowned by the Sun (Revelation 12:1-5), as a symbol of her being divinely overshadowed (Luke 1:35). 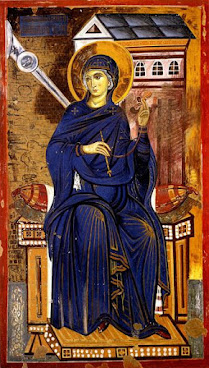 She fulfills the Horite Hebrew expectation that a woman of their ruler-priest caste would conceive the son of God by divine overshadowing as shown in ancient images of Hathor. 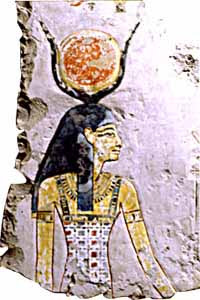 I propose that the Asherah cult was associated with water shrines where women sought divine help to conceive. The solar symbolism and the cow-calf imagery suggest a connection to Hathor and the religion of the Horite Hebrew. (See Hathor Veneration at Timna.)