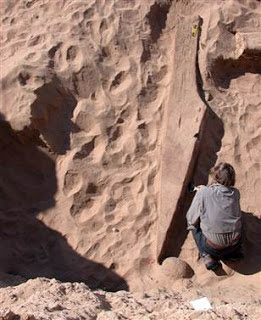 In Book II of The Histories, Herodotus describes some of his experiences in ancient Egypt and, though once doubted, more and more of his observations have been confirmed. A recent example is the confirmation of Herodotus' detailed description of Egyptian merchant ships.

His description aligns well with the vessel discovered by Franck Goddio and a team from the Institut Européen d’Archéologie Sous-Marine during underwater excavations at Thonis-Heracleion, a sunken city in Aboukir bay, Egypt. Herodotus described a “baris”, an Egyptian trading vessel that is like the wreck discovered at the Thonis-Heracleion site. That hull is about 70% intact and has a crescent-shape made of thick planks joined with tenons.

The vessels used in Egypt for the transport of merchandise are made of the Acantha (Thorn), a tree which in its growth is very like the Cyrenaic lotus, and from which there exudes a gum. They cut a quantity of planks about two cubits in length from this tree, and then proceed to their ship-building, arranging the planks like bricks, and attaching them by ties to a number of long stakes or poles till the hull is complete, when they lay the cross-planks on the top from side to side. They give the boats no ribs, but caulk the seams with papyrus on the inside. Each has a single rudder, which is driven straight through the keel. The mast is a piece of acantha-wood, and the sails are made of papyrus. These boats cannot make way against the current unless there is a brisk breeze; they are, therefore, towed up-stream from the shore: down-stream they are managed as follows. There is a raft belonging to each, made of the wood of the tamarisk, fastened together with a wattling of reeds; and also a stone bored through the middle about two talents in weight. The raft is fastened to the vessel by a rope, and allowed to float down the stream in front, while the stone is attached by another rope astern. The result is that the raft, hurried forward by the current, goes rapidly down the river, and drags the “baris” (for so they call this sort of boat) after it; while the stone, which is pulled along in the wake of the vessel, and lies deep in the water, keeps the boat straight. There are a vast number of these vessels in Egypt, and some of them are of many thousand talents’ burthen.

The ship was made of acacia planks held together with long tenon-ribs and fastened with pegs, creating ‘internal ribs’ within the hull. Dr. Damian Robinson (Oxford Maritime Archaeologist) said, “Herodotus describes the boats as having long internal ribs. Nobody really knew what that meant… That structure’s never been seen archaeologically before. Then we discovered this form of construction on this particular boat and it absolutely is what Herodotus has been saying.”

Robinson added: “Where planks are joined together to form the hull, they are usually joined by mortice and tenon joints which fasten one plank to the next. Here we have a completely unique form of construction, which is not seen anywhere else.”
Related reading: The Ancient Egyptians Were Seafaring; Ancient Egyptian Sea Power and the Origin of Martime Forces
Posted by Alice C. Linsley at 5:24 PM