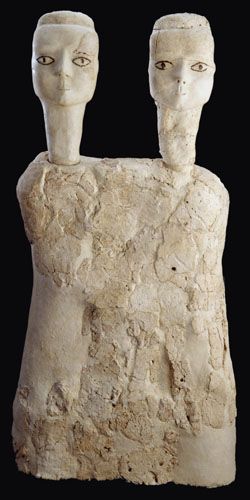 One of three 8000-year two-headed figures found at 'Ain Ghazal.

Among the Yoruba, the head is regarded as the seat of an individual’s essential energy and being. 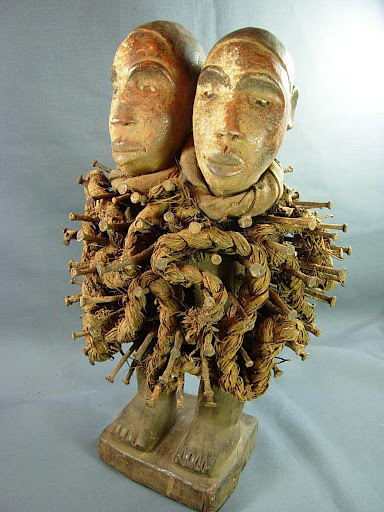 Two-headed Nkisi from the Democratic Republic of Congo (19th century).

The two-headed busts have parallels in the iconography of twin gods or goddesses from Neolithic times. Small statues and large reliefs showing two heads are found at Neolithic Çatal Hüyük and Tell Brak, and in Anatolia and Cyprus.
This practice of doubling is to images what reduplication is in language: it makes the message emphatic. It grabs the attention, and implies that the subject has extraordinary powers of seeing and hearing, suggesting omniscience.
Deities with two, three, and four faces are common in the iconography of many ancient populations. The Assyrian goddess Ishtar sometimes appears with two heads: “Istar of Nineveh is Tiamat … she has [4 eyes] and 4 ears...”
There are textual references in Enuma Elish concerning the two heads of the Babylonian hero Marduk. The following verses emphasize the divine nature of the subject.

Anu his father’s begetter beheld him,
And rejoiced, beamed; his heart was filled with joy.
He made him so perfect that his godhead was doubled.
… Four were his eyes, four were his ears…

“When Ea who begot him saw him, he exulted ... for he saw that he was perfect, and he multiplied his godhead … with four eyes for limitless sight and four ears hearing all ….”

The following verses of Enuma Elish convey the idea of the deity's omniscience, emphasized
by four eyes and four ears:

They (his features) were impossible to understand (and) difficult to behold.
Four were his eyes, four were his ears.
When he moved his lips, fire blazed forth.
Each of his four ears grew large
And (his) eyes likewise, to see everything.

Bicephalic anthropomorphic statuary is found in many parts of the world. This limestone sculpture from Papua New Guinea represents an ancestor. 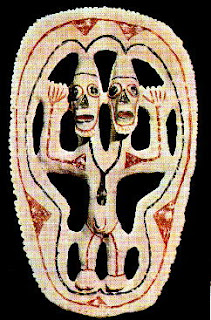 This 3000-year two-headed figurine was found in Tlatilco. 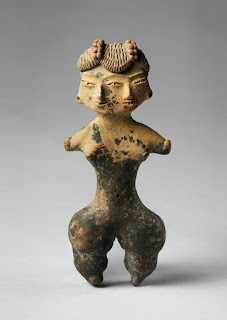 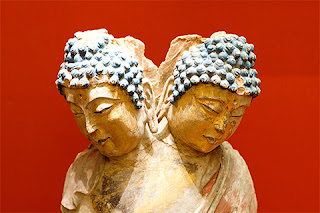 This two-headed grave marker is in the Caldragh Cemetary on Boa Island in Ireland. It is estimated to be at least 2000 years old. 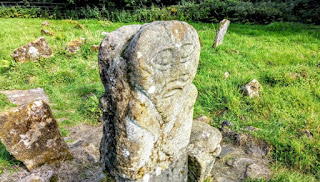 The biblical version of this concept is found in the multiocular celestial being of Ezekiel's vision (Ezekiel 1:18; 10:12). In certain manuscripts in the Old Church Slavonic this phrase is found with an rare glyph "серафими многоꙮчитїи" (serafimi mnogoočitii - "many-eyed seraphim"). Many-eyed creatures are also part of John's vision in Revelation 4:2-8.
The universality of the custom of two-headed figures attests to its great antiquity.