Regional religious, social, and economic activities revolved around temples in the ancient world. The temple guilds were clan-based and the assignment of their work was hereditary. The hereditary crafts are evident in the Mishnah concerning the clans of Temple craftsmen (Shek. 5:1; Yoma 3:11; 38a).

The Hebrew ruler-priest caste had guilds for craft specialization. Max Weber believed the origin of the caste system was guilds and clans.

In Jerusalem, the temple guilds were not restricted to the Levites. Descendants of Judah and Caleb, for example, played a major role in the daily operations of the Temple.  However, all guild members were of Hebrew ethnicity, that is, they were members of the Hebrew priest caste. That is why David's sons served in the Temple and are called "priests" in 2 Samuel 8:18.

Likewise, Seraiah, of the clan of Judah, is described as the "founder of the Valley of Craftsmen" or the founder of Ge Harashim in 1 Chronicles 4:14. This valley is associated with Ono, Lod, and Hadid in Nehemiah 11:35, all of which were located northwest of Jerusalem in Ephraim. There is a further connection to one of the most famous temples of the ancient world, the temple at biblical On (Ono or Iunu) on the Nile. Joseph married a daughter of the high priest of On (Gen. 41:45).

The temple guilds were not primarily commercial guilds. Their foremost responsibility was to provide for the material needs of the temple and the residents of the temple complex. The temple guilds did business with the merchants of incense, precious stones, and precious metals. They also received offerings of grain, wine and oil from regional farmers.

Some temple guild members served more than one purpose. Asaph is an example. He was a musician and also a prophet. Priests, shamans, and Celtic bards commonly sang prophesy in ecstatic states.

There were ranks within the guilds. Exodus 31 and 36-39 speak of a master craftsman named Bezalel who was chief over all the craftsmen responsible for constructing the Ark of the Covenant, the Tabernacle and its furnishings, the priests' vestments, and the sacred vessels.

Commercial guilds are found today in Africa, India, and the Middle East. The "perfumers" who provided incense for use in the Temple were probably members of commercial guilds.

In Niger, the craft of metal work is the right of the Inadan and it is usually done away from prying eyes. The photo (right) shows an Inadan metal worker launching a mock attack outside the home of a Taureg who was believed to have undermined the metal worker's specialized role. In the history of India serious penalties were attached to the violation of guilds' rights.

Temple guilds are less common today. They appear to have declined after the Axial Age, the last period to see royal patronage of regional temples with sacrificing priests.

Unlike guilds of the Middle Ages where a man could apprentice to learn a trade, members of the ancient guilds did the work of their ancestors. Though this created a static social hierarchy, it also allowed for job security, promoted clan pride and familial loyalty, and encouraged cooperation between the guilds.

What follows is a partial list of the Temple guilds of the biblical Hebrew.

Carpenters
Carpentry was a prized craft among the Hebrew ruler-priests. Bezaleel was a carpenter. He was a descendant of Hezron and Caleb, and the grandson of Hur. He was a contemporary of Salma, the father of Boaz who married Ruth.

Bezaleel was the chief architect of the tabernacle, its furnishings, the sacred vessels, and the priests' vestments. Jesus did the work of a carpenter as that was the guild of Joseph of Nazareth and some men of the 18th division of priests.

Doormen
These Hebrew men are sometimes called "porters" (2 Chron. 23:4) or "keepers of the threshold" of the temple (2 Sam 18:26; 2 Ki 7:10,11). In 1 Chronicles 26:4 some doorkeepers are designated "sons of Obed-Edom". Psalm 84:10 speaks of the preference to be a "doorkeeper in the house of the Lord" rather than to "dwell in the tents of the wicked." This suggests that the doorkeeper guild was ranked low in the caste hierarchy. Besides opening and closing the doors, they were responsible for the care of the sacred vessels (2 Ki 12:9; 22:4; 23:4). Their clan chiefs drew lots for which gates they would guard.

Metal Workers
Metal work was a specialized craft in which the Horite Hebrew were highly skilled. Aaron fashioned the golden calf. Moses fashioned the bronze serpent. The metal-working temple guild was responsible for the fabrication of the bronze basin, and sacred vessels containing wine and anointing oil.

Later the priest guild of metal workers minted the coins that were used exclusively in the Temple compound.

Musicians
Asaph was a singer and seer in David’s court. He was the son of Berachiah, the son of Shimea (variant spelling: Shimei). Asaph was the chief of his guild (1 Chron 16:5). The sons of Asaph are musicians, one of the temple guilds. In Ezra 2:41 and Neh 7:44, the temple singers are referred to as the “sons of Asaph.” Psalms 50 and 73-83 are introduced with the phrase le’asaf  (of Asaph) in the superscription.

Asaph and his brothers are appointed to sing the songs of thanksgiving to the Lord (1Chr 16:4-7), and to sound bronze cymbals, and the priests Benaiah and Jahaziel were to blow trumpets.

The description of Asaph as a seer (2 Chr 29:30) suggests a cross-over to another line of work: that of the prophet or moreh.

Potters
Potters made jars of clay to hold water for ritual purification and for washing the blood down the sluices from the altar of sacrifice. It is likely that the clay ancestor figurines called "teraphim" were made by temple potters for use in the homes of the Temple staff.  The Temple potters formed some ossuaries of clay slabs, though the ossuaries of the temple elite were made of limestone.

Stone Masons
These Hebrew men created stone pillars for the temple, excavated rock tombs for the priests, carved stone ossuary boxes for secondary burial, and directed mining operations. It appears that Joseph of Arimathea was in this guild. 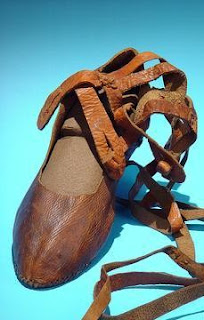 It is likely that in David's time and before, the stone masons carved death masks (as shown above) which were used in burial rites. The hair of the deceased was woven through the holes around the top of the mask.

Tanners
The members of this guild were called "tahash" and they tanned the hides of animals that were flayed in preparation for the Temple sacrifices. The leather was used to make belts, sandals, wine sacks, and tents. Simple garments were sewn from hides. Skins were also used for military dress.

One of Abraham's nephews was Tahash (Gen. 22:24). A tanner called Simon is mentioned in Acts 10:6. Paul, Aquila and Priscilla were of the tahash guild (Acts 18:3). The tanners lived toward the outskirts of Jerusalem due to the odor caused by the tanning processes.

Weavers
The production of garments for the Temple households involved a complex process. The most common materials used were wool and linen. The raw material was cleaned and some was dyed. It then was spun into threads on a spindle. Spinning was done by mainly by women at home (cf. Prov. 41:19) and by Temple virgins.

There is a connection between the Virgin Mary and spinning of purple thread in chapter 9 of the Gospel of Pseudo-Matthew. Mary and the other virgins are reported as spinning thread in the Temple compound. Carrying a pitcher, Mary went out to a fountain where the angel announced to her, "Blessed art thou, Mary; for in thy womb thou hast prepared an habitation for the Lord." The next day the angel appeared to her again while she is spinning.

Related reading: The Daughters of Hebrew Priests; Who Were the Horite Hebrew?; Castes of Ancient Egypt by John W. May