Moses and the "Kushite" Bride 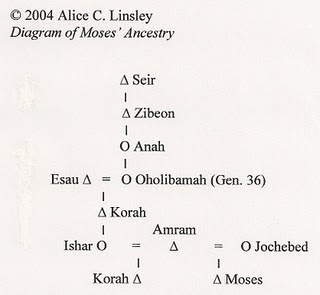 Moses' first wife would have been a half-sister, a daughter of Amram. She is described as his "Kushite" bride in Numbers 12:1. It seems probable that this wife remained in Egypt with Amram because we have very little information about her. In Exodus, the focus shifts to Zipporah, Moses' Midianite cousin.

Ishara (Ušḫara) is a Hittite word said to mean "promise" or "binding oath." The Hittites are related to Heth of Kiriath Arba (Hebron) where Sarah lived. Though a place rather than a person, Hebron is listed as a "son" of Kohath in 1 Chronicles 23:12.
Ishara is a woman's name and is related to the name Ishtar. According to Stol and Wiggermann, although Ishtar was a goddess of love, Ishara was the figure to whom women turned to bare sons (Birth in Babylonia and the Bible: Its Mediterranean Setting, p. 79).

In 1 Chronicles 23:18, Ishar is named as a chief, as is the woman Anah in Genesis 36. (See diagram below.) Among the Horite Hebrew, women served as chiefs. The right to rule depended on one’s rank and authority more than one’s gender. Rank and authority were determined by the antiquity of the clan and its reputation. According to Genesis 36:31, the Horites “are the kings who reigned in the land of Edom, before any king reigned over the children of Israel.” Jeremiah notes that the rulers of Edom and Teman of Edom were renowned for their wisdom (Jer. 49:7).
Genesis 36 mentions that Esau the Elder married a Hittite woman. Her name is Adah, the daughter of Elon. In this same diagram, we see Anah, daughter of Zibeon, listed as a Horite chief. Anah's daughter Oholibamah married Esau the Younger.

1 Chronicles 23:18 says that Ishara's son was Shelomith. The name is problematic because there are eight people by that name in the Old Testament, 5 men and 3 women. If Shelomith is the name of another son born to Amram (and Ishara?), his name identifies him as a member of a ruling family. In the ancient Akkadian language, shal means rule or reign, and mit refers to a mace.
The names Shelomith and Shulamit share the same consonants: Sh-l-m-t. The name Shulamit appears in the Song of Songs where she is described as "dark as the tents of Kedar."
The dispute that arose over Moses' Kushite wife appears to be connected to the ruling house in Egypt which was served by Horite and Sethite priests. Though marriage to a half-sister was customary among the biblical Hebrew, it is likely that the Kushite bride was viewed as compromising Moses' authority among the clans of Jacob who were leaving Egypt.