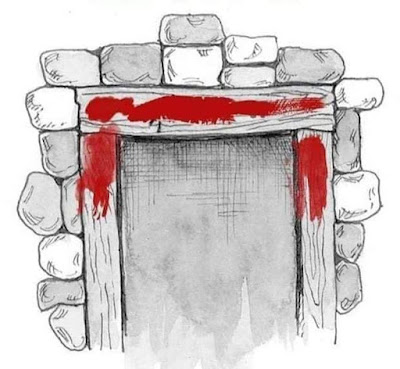 
There are two "passovers" in the Old Testament. Death passed over those in the houses with the lamb's blood on the door posts. Likewise, when death came to Jericho, the scarlet cord hanging from the window of Rahab's house preserved her household. The horizontal blood streak on the door lintel and the scarlet cord hanging vertically from the window form a + cross. When considered together the narratives point us to Jesus Christ whose blood brings deliverance.

The paradox there is that blood was perceived both to purify and to pollute. As St. Paul says, "For the message of the cross is foolishness to those who are perishing, but to us who are being saved it is the power of God." (1 Corinthians 1:18)

Reality in the Bible is told from the perspective of both the male and the female and the added dimension of the male-female couplet. Consider prophets and trees as a male-female couplet. Deborah judged Israel from her tamar tree between Bethel and Ramah (north-south axis). The tamar is a date nut palm associated with the female. Many biblical women were named Tamar. Likewise, the prophet or "moreh" consulted by Abraham sat under an oak. This tree was associated with the male. The trees represent another male-female couplet. There is no murky middle ground on gender in teh Bible. No androgynous authority figure sitting under some fanciful tree.

Rahab and the Horite Hebrew

Related reading: Blood and Binary Distinctions; The Sun and Moon as a Gendered Couplet