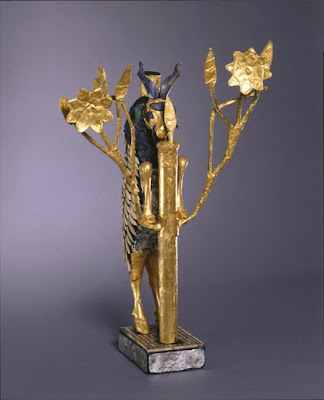 Sir Leonard Woolley dubbed this statuette the ram caught in a thicket, alluding to the story of Abraham sacrificing a ram on Mount Moriah.

Notice that this ram has wings. It represents a deity. The only ram-headed deity of the ancient world was Horus whose name HR in ancient Egyptian means "Most High One." He was called the son of God the Father.

The appearance and sacrifice of the Ram on Mount Moriah foreshadows the sacrifice of Jesus Messiah. Abraham is said to be justified because he obeyed God in going to Mt. Moriah and he believed the sign God gave him.

"Was not Abraham our father justified by works, when he had offered Isaac his son upon the altar? Seest thou how faith wrought with his works, and by works was faith made perfect? And the scripture was fulfilled which saith, Abraham believed God, and it was imputed unto him for righteousness: and he was called the Friend of God." (James 2:21-24)

"For the promise to Abraham and his offspring that He would be heir of the world did not come through the law but through the righteousness of faith." (Rom. 4:13)

As Abraham and Isaac ascended Mount Moriah, Isaac asked his father, "Where is the lamb for the sacrifice? Abraham replied that God would provide the lamb. Instead, God provided a ram.

To understand what this meant to Abraham, we must be investigate the Horite Hebrew beliefs concerning the expected Righteous Ruler who would die and overcome death on the third day.

For Abraham the Horite Hebrew, the lamb was associated with the east and the rising of the sun. The sun was the emblem of God Father (Ra/Ani) and God Son (Horus/Enki). As the day advanced, the lamb matured into a ram. The ram was associated with the west, the setting sun, and the future. The period of the morning hours was called Mandjet, and the period of the evening hours was called Mesektet. While Horus was on the Mesektet, he was in his ram-headed form. So Abraham is given a sign concerning a future event involving the son of God as a sacrifice.
Related reading: Jesus: From Lamb to Ram; What Abraham Discovered on Mt. Moriah; Ram Symbolism in the Ancient World; The Ra-Horus-Hathor Narrative; The Substance of Abraham's Faith; The Horite High Places