Ram Symbolism of the Ancient World

The ram was a powerful symbol throughout the ancient world. A ram head figurine was found in the Tsauni Mine in Nigeria. It dates to about 500 BC. The skins of rams dyed red made a covering for the Tent of Meeting (Ex. 26:14). This is the blood covering over Moses as he met with the Almighty.

At Mount Barkal the rulers constructed a shrine city with a temple dedicated to the Creator Amun-Ra. Other Amun sanctuaries were constructed at Kawa (Gematen) and at Sanam.


Among the ancient Nilotes, Harmakhet (Horus) was depicted in the form of a sphinx with the head of a ram. Horus comes from the ancient Egyptian HR, meaning "Most High One." He is the archetype of the Son of God. He is represented as a ram on Mount Moriah to be sacrificed in place of Isaac (Gen. 22). 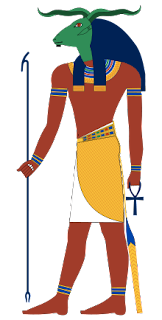 The image above is Khnm, the source of the Nile waters (nm - waters). There are many dedications to Khnm at the river shrines of Elephantine Island and Esna.
The ram was an important symbol of divine power at the Siwa oasis visited by Alexander the Great in the Libyan desert. He went to the Siwa temple to consult the oracle of Amun-Ra. Alexander's coin shows him with the ram's horns. As a child he was told that he was descended from the gods and it appears that he took this as justification for his vast conquests.


At the Amun-Ra Temple at the foot of Jebel Naga/Naqa in Sudan, twelve ram statues set on pedestals line the approach to the temple (see image below). This shrine city was first mentioned in texts of the Meroitic period in the 3rd century B.C. This site was dedicated to Amun-Ra, Horus and Hathor. It is a typical example of a Horite shrine with many pillars like those found at Karnak and Heliopolis (Iunu). 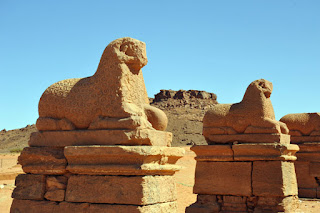 Abraham's people were Horites, a caste of priests that dispersed widely in the ancient world. They served rulers at the high places and at river shrines and temples. In ancient texts they are often known as 'Apiru, Hapiru or Habiru. The word Hebrew is derived from the word Habiru. O'piru refers to a Sun temple.

The Horite religion was messianic in character. It involved the expectation of divine action through the agency of the Creator's son, Horus. It is associated with the descendants of Noah known as Kushites, but not limited to the Kushites. The rulers of Edom (Idumea) were Horites. The region of Edom is also where Abraham ruled between Hebron and Beersheba. He received a ram to sacrifice on the mountain. In Horite religion the Sun rose as a lamb in the east and died as a ram in the West. The solar arc spoke to them of the advance from young innocence to mature strength as a warrior.  Horus was called the Lamb in his weaker (kenotic) state and he was called the Ram in his glorified strength. Both are associated with the death and resurrection symbolism of the vernal equinox.

The Horites were devotees of Ra, Horus and Hathor. Horus was regarded as the "Son" of Ra who Hathor conceived when she was overshadowed by the Sun, the Creator's symbol or emblem. Hathor's animal totem was the long-horn cow, and she is shown wearing the horned crown as a sing of her divine appointment.
﻿
﻿ 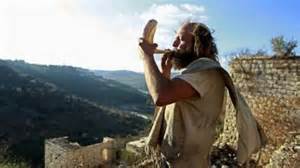 Horite religion prevailed among the Nilo-Saharan rulers who kept cattle and sheep. The long horns of the cattle are often shown as a cradle for the overshadowing sun. Divine overshadowing meant appointment to rule. This is why many of the rulers of the Bible have names that begin with the Y horn symbol: Yitzak, Yishbak, Yaqtan, Yacob, Yeshua, etc.

The curved ram's horns represent the divine warrior defending his flock. The ram's horn, called shofar, was blown at the high places to sound the alarm and to call the warriors to arms. As such, the ram is often spoken of in terms of war, perhaps another reason Alexander, a great warrior, found it a compelling image. This view is supported by the conflict that arises between the ram and the he-goat in Daniel 8.

The ancient Egyptian word for ram is ba, the same word used to speak of flesh. This may be a reference to the incarnation of Horus, the only deity of the ancient world to be represented as a human male. A sacred ram was kept at the shrine city of Djedet (Mendes) also known as Pr-Banebdjedet. Ba-neb-djedet means "Ram Lord of Djedet" or Ram Lord of the Sacred Pillar (djedet refers to a pillar). Pr refers to a house, shrine or temple, as in O'piru , a Sun temple.

The ram was a symbol of the incarnation of Horus. Once the ram died it was mummified and buried in a necropolis. Mummification was an essential step in preserving the flesh or body (ba) in anticipation of the resurrection. As St. Augustine noted, "the Egyptians alone believe in the resurrection, as they carefully preserved their dead bodies." (Death, Burial, and Rebirth in the Religions of Antiquity, p. 27)

Horus's anthropomorphic form is either as a adult male or as a boy wearing the sidelock typical of royal Egyptian youth. Horus as a boy is often shown on cippi dominating crocodiles and serpents. Consider this in light of the Woman, the Child, and the Dragon in Revelation 12.


The spread of ram imagery in Africa

M. D. W. Jeffreys is an anthropologist who teaches at the University of Pennsylvania. He has written about the spread of the ram-head deity throughout Africa. He maintains that the point of origin was Southern Nigeria. He wrote:


Among the Ibo of Southern Nigeria is a cult object known as Ikeŋga. It is associated with good fortune, success, ability and the strength of the right arm. It is represented by a carved wooden figure of a man with rams horns on his head and a machet in one hand and a human head in the other. Rams are sacrificed to it. The information of previous observers is summarized followed by my own field work. Then other instances in Africa of the ram‐headed god are discussed including that of Egypt whence it is concluded is derived the ram‐god cults of the rest of Africa. (From here.)


Related reading: What Abraham Learned on Mt. Moriah; The Ra-Horus-Hathor Narrative; Who Were the Horites?; The Urheimat of the Canaanite Y; Sheep Cotes as Sacred Spaces; Jesus: From Lamb to Ram; Monuments of the Ancient Kushites; Edom and the Horites; The Edomites and the Color Red; Ram and Bull