Horus, the Patron of Kings

Before the emergence of Buddhism, temples in Cambodia were Hindu shrines dedicated to different deities. Most of the temples had an east orientation, but one at Angkor Wat had a west orientation, suggesting a connection to Horus on the Horizon. The term "Wat" means village, town, settlement, or shrine. Very likely "Anghor" is a variant of "ankh-Hor" which means "Long live Horus!"

Hinduism has many layers that developed over time. As a religion, Hinduism reached its zenith in the Axial Age (900-200 BC). The earliest civilization of the Indus Valley is that of Harappa (2500–1700 BC). In Dravidian, Harappa means "Horus is father." Among many ancient populations, Horus was the patron of kings. 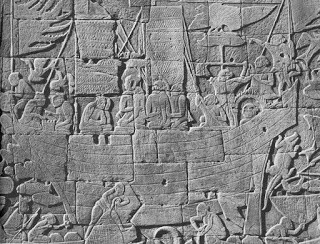 The stone relief (shown above) is at Agkhor Wat. It shows Horus in the form of his falcon totem perched on the mast of Ra's solar boat.

Parts of the Vedic Samhitas constitute the oldest layer of Hindu tradition and include material that resembles Horite Hebrew concepts. The oldest site of Horite Hebrew worship is at Nekhen on the Nile and dates to around 3800 BC.

Evidently, the Horites spread their religious from ancient Kush to Mesopotamia and beyond. The old fire altars in Hinduism were falcon shaped. The falcon was the totem of Horus. This is why the Shulba Sutras state that "he who desires heaven is to construct a fire-altar in the form of a falcon." 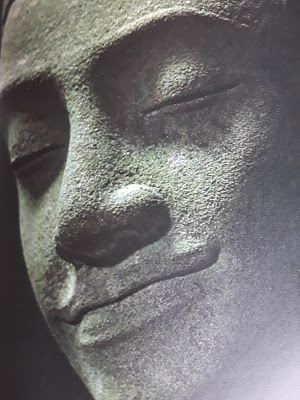 Statue found outside the walls of Angkor Thom in Cambodia.
(Photo taken around 1958.)

“I looked up at all those towers, rising above me, overgrown in the greenery and suddenly shivered with fear as I saw a giant frozen smile looming down at me … and then another smile, over there in another tower … and then three, and then five, and then ten.”

Khmer Empire was an absolute monarchy that thrived from the 9th to the 15th century. Chou Ta-Kwan was a Chinese envoy to Angkor in the thirteenth century AD. He wrote about the daily life of the Khmer.


"When the king comes out, the troops are at the head of the procession. Their bodies and feet are bare. They hold a lance in their right hands and shields in the left. Then come the standards, the flags and the music. The king and the ministers are all mounted on elephants. In front of them many red parasols can be seen even from far off. Next come the wives and concubines of the king riding in palanquins, carts or on horses and elephants. They carry more than one hundred parasols heavily decorated with gold..." (Horizon: A Magazine of the Arts, January 1959, p. 71) 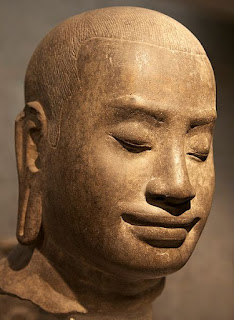 Ta Prohm is the modern name of the temple at Angkor, Siem Reap Province, Cambodia. Construction on Ta Prohm began in 1186 AD. A rare inscription at Ta Prohm provides statistics on the temple's workers. The inscription reports around 80,000 workers, including 2700 officials and 615 dancers. It speaks of 66,000 farmers who provided 3,000 tons of rice annually to support the temple workers, priests, and dancers. Imagine this also happening at Anghor Thom and the Bayon Temple. The burden would have been enormous and this explains why the more egalitarian approach of Buddhism took hold, ultimately supplanting Hinduism in that region. 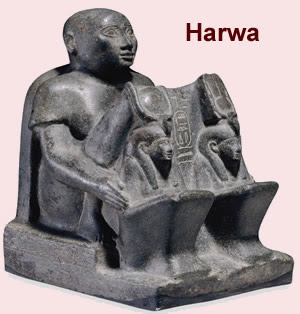 The deification of the Asian rulers finds precedent among the ancient Nilotes, especially the Egyptians. The ruler-priests of the Khmer look like the priests of the Nile. Compare this image of an Egyptian "Harwa" to the image of Jayavarman VII. In Eleanor Mannika's work, "Angkor Wat: Time, Space and Kingship" she argues that the dimensions, alignment, and bas-reliefs of Angkor Wat speak of Suryavarman II as the divinely appointed king.