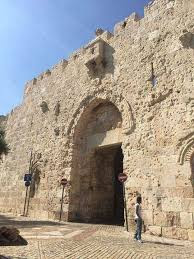 The town gate was a place of significant activity among biblical populations. The gate served as a passageway into the fortified settlement and also as a gathering place. Usually the town's entrance had an outer and inner gate. There was an area between the gates where men gathered to hear the news and deliberate among themselves. This is where the elders heard cases and rendered judgments, and prophets declared the Word of the Lord.

This custom is described in the last chapter of the book of Ruth. At the gate of Bethlehem, Boaz meets with the kinsman redeemer and tells him, “Naomi, who has come back from the plateau of Moab, is putting up for sale the piece of land that belonged to our kinsman Elimelech. So I thought I would inform you. Before those here present, including the elders of my people, purchase the field; act as redeemer. But if you do not want to do it, tell me so, that I may know, for no one has a right of redemption prior to yours, and mine is next.”

The kinsman redeemer agrees to redeem the property until he learns that he also must act as the "levir" and produce an heir for Ruth's dead husband (levirate marriage). He replies to Boaz, “I cannot exercise my right of redemption for that would endanger my own estate. You do it in my place, for I cannot" (Ruth 4:6).

Here we glimpse the complexity of Horite Hebrew inheritance rights. By levirate marriage a widow was able to retain her deceased husband's holdings.

Because the ruler-priest had two first born sons by his two wives, provision was made for both sons to receive an inheritance. Additionally, grants were made to "sent-away" sons.

Daughters could petition to receive inheritance.

In an extremely archaic practice, inheritance rights were attached to whoever had possession of the clan ancestor figurines (teraphim).

Each of these situations is considered in this article on The Social Structure of the Biblical Hebrew.

Related reading: When King David Sat at the Gate; Evidence of Castes in the Book of Ruth