Ruth at the Threshing Floor 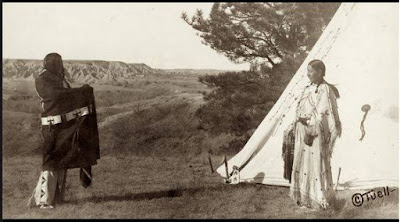 The book of Ruth is short narrative, but it is rich in anthropologically significant data.

In Ruth we read about a custom involving a blanket that has been observed in various cultures. Boaz has fallen asleep at the threshing floor after a day or hard labor. While he sleeps, Ruth lifts up his blanket and covers herself with it. This is her way of seeking marriage to Boaz, a ruler of Bethlehem.

The photo above, titled "A Sioux Wedding", was taken in 1912 by Julia Tuell. Among the Dakota Sioux it was the custom for the maiden to agree to marriage by stepping into her suitor's blanket. E. Irving Couse's painting "The Wedding" (below) also depicts this custom. 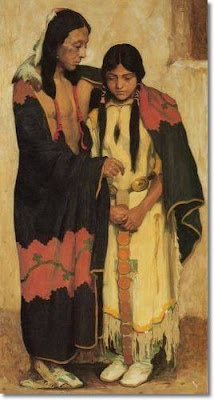 In Ruth 3, we read that Ruth went to the threshing floor where Boaz was sleeping and quietly "uncovered his feet and lay down. In the middle of the night something startled the man; he turned—and there was a woman lying at his feet!"

Some have interpreted this as a seduction based on the supposition that "feet" is sometimes a euphemism for testicles. However, the plain meaning of the text is that she covered herself at his feet so quietly that Boaz did not wake. A man's testicles are very sensitive and had this been a seduction, he would have awakened. Further, when he wake, he asks, " “Who are you?” Ruth makes her intention clear when she responds:

“I am your servant Ruth. Spread the corner of your garment over me, since you are a guardian-redeemer of our family."
There is evidence that threshing floors were the sites of the "hieros gamos" or sacred marriage during harvest times. Judah's intercourse with a shrine "qadesh" (Tamar in disguise) took place at Timna, which had a temple dedicated to Hathor. Timna was directly north of Abdullum. Judah went to Timna to visit with his friend from Abdullum and to help with the harvest. The hieros gamos may have been conducted in hopes that the Divine Son would be conceived. However, among the early Hebrew this expectation did not involve sexual intercourse. The Divine Son was to be conceived by solar overshadowing. This is evident in the many images of Hathor overshadowed and was fulfilled in Mary's conception of the Son of God by divine overshadowing (Luke 1). 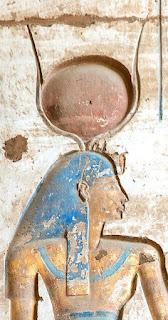 The presentation of Boaz as a righteous man who fulfills all the Law: cares for foreigners, widows, allows gleaning in his fields, also dismisses the belief that he had sexual intercourse with Ruth at the threshing floor. Since he knew he was not in line to rightfully claim her as a levir, he would not have violated the law by having sex with her.
As the story of Ruth and Boaz presents King David's ancestors in the most positive light, illicit sexual relations would dispose of Boaz's character as a righteous and faithful man.
Threshing Floors as Places of Worship

In the ancient world, daily activities like cooking, sowing, harvesting, and threshing grain had religious significance. Threshing floors were associated with the Sun and with solar cycles. For the early Hebrew the Sun was the symbol of the High God and some threshing floors resembled solar images. 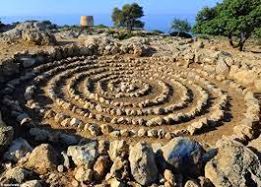 Threshing floors were owned by the local chief and were sacred places at high level elevations where the wind could carry away the chaff. Araunah, a Jebusite ruler, sold David a threshing floor upon which David constructed an altar.

Law-abiding Hebrew rulers offered the first of the grain to the High God. This is called the "wave offering" of the "sheaf offering" in the Bible. 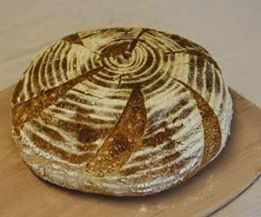 There is a connection between the solar imagery of the threshing floor and the round loaves baked from the grain. This Irish Maslin bread is an example. Maslin bread is the oldest known bread eaten by the Celts. It was the bread of common folks, containing a blend of wheat and rye flours.
The six-prong solar image is found wherever the early Hebrew dispersed, and they dispersed widely from their apparent point of origin along the Nile.