How spoken Akkadian may have sounded.

Among the cognates in Sanskrit and Akkadian are the names of gods and priests; words for parts of the body, the horse, and household and temple furnishings.

Ajay Pratap Singh has written, "Comparisons of Akkadian and Sanskrit words yielded at least 400 words in both languages with comparable phonetic and semantic similarities. Thus Sanskrit has, in fact, descended from Akkadian."

Support for this view comes from Harappan artifacts that are similar to those of the ancient Nile. A connection between the two riverine civilizations is made in Genesis 10 where we are told that Nimrod, a Kushite kingdom builder, ruled where Akkadian was the language of the empire.

The Bible scholar, E.A. Speiser, found that names taken to be Indo-European were often labeled "Hurrian" and were later identified as Akkadian.

Hurrian or Horite names in ancient documents does not mean that there was a Hurrian or Horite language. The Horites were widely dispersed and spoke the languages of the people among whom they lived. Today scholars use terms like Ugaritic-Hurrian, Hurro-Urartian and Hurro-Akkadian, or Canaano-Akkadian.

Ugaritic-Hurrian shares many letters with Hebrew and is also read from left to right. This Ugarit alphabet chart shows the Ugarit letters in order. There are eight additional letters in the Ugarit alphabet that are not in the Hebrew alphabet, two of which are vowels. The tablet is missing the 13th, 14th, and 25th letters, which appear to have been broken off the right end of the tablet.

According to this study, "Ugaritic-Hurrian matches the initial stage of intermingling, Hurro-Akkadian reflects gradually more intense blending, and Canaano-Akkadian corresponds to the phase of a profound fusion of the two source codes."

This view of the emergence sequence aligns with the view of Sholmo Izre'el (Tel Aviv University) He writes, "To my mind, the best term used so far for indicating the nature of Canaano-Akkadian is mixed language. While not attempting a definition of the term, Bakker and Mous do see similarities between the languages described in their collection Mixed Languages (1994). They do, however, propose the term language intertwining ‘for the process forming mixed language showing a combination of the grammatical system (phonology, morphology, syntax) of one language with the lexicon of another language’ (Bakker and Mous 1994: 4-5).”

Hurro-Urartian developed in the Taurus Mountains and is similar to old Armenian. 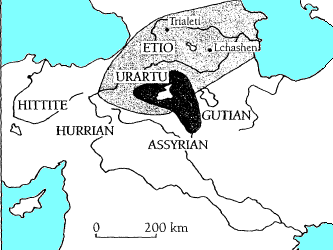 The map shows where the Hurro-Urartian dialects were spoken.

Arabic speakers note a similarity between some words in modern Assyrian and ancient Akkadian. A list is provided here.