This is the third in a series on daily life among archaic peoples. The first in the series is on threshing and the second is on keeping sheep.

There is very little mention of swimming in the Hebrew Bible. This has led to speculation that the Hebrews did not like water or that they were not skilled swimmers. The early Hebrew/Habiru/Abru lived along the Nile and would have developed a healthy respect for the currents, crocodiles, and other hazards of the region.

Jeremiah 16:16 suggests that diving was done to hunt for things under the water.


"Behold, I am going to send for many fishermen," declares the Lord, "and they will fish for them; and afterwards I will send for many hunters, and they will hunt them from every mountain and every hill and from the clefts of the rocks."

The fishermen are hunters, a reference to the successive invaders of Judea (Amos 4:2; Habbakuk 1:14,15). The Hebrew word to dive is לִצְלוֹל and although this word does not appear in the Jeremiah passage, diving to hunt is suggested (Dictionary of the Holy Bible, Augustin Calmet, p. 435).

An Egyptian clay seal dated between 9000 and 4000 BC shows four people swimming. Below is a photo of a 10,000-year-old rock painting of people swimming. This was found in the Cave of Swimmers near Wadi Sura in southwestern Egypt. These pictures show swimmers using the breaststroke or the doggy paddle. (The majority of Saharan rock images date to between about 6000 BC and 1000 AD.) 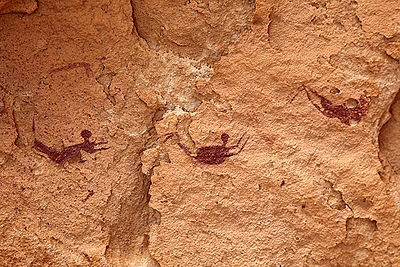 The Nilotic Hebrew would have been able to swim. They controlled commerce on the Nile where they built shrine cities such as Nekhen and Nekheb. Nekhen is the oldest known site of Horite Hebrew worship.
Heroes among ancient peoples were expected to be fearless in combat and in river crossings. Stories were told of heroic warriors swimming across rivers. Horatius (named for Horus) was wounded in battle at a bridge over the Tiber. Hearing a shout from the other bank that the bridge was torn down, he "leaped with his arms into the river and swimming across ... he emerged upon the shore without having lost any of his arms." Livy records that Horatius committed himself to the Tiber, praying, "Tiberinus, holy father, I pray thee to receive into thy propitious stream these arms and this thy warrior."
Nilotic peoples thought of the Nile in a similar way. Even today, Ethiopians living near the source of the Blue Nile call the place Abay, meaning "father." (Gish Abay is believed to be the Gihon mentioned in Genesis 2.)

Swimming and diving in the ancient world was a routine part of daily life for peoples who lived along the major water systems and the seacoasts. They were foragers and their way of life continues among sea dwellers in places like the Philippines, Australia and Borneo.


The Badjao are sea dwellers who have lived off the northeast coast of Borneo for more than 200 years. They have no nationality. They are aquatic nomads who live in boats and earn their living as highly skilled divers. Badjao divers walk along the seafloor hunting for fish and pearls. They can descend as deep as 100 feet (30 meters). They train their children to swim and dive from an early age.

Related reading: The Land of WaWat; Boats and Cows of the Nilo-Saharans; Boat Petroglyphs in Egypt's Central Eastern Desert; Mysterious Nomads Who Survived the 2004 Tsunami