The Upper Nile appears to be the point of origin of the features of religion that are associated with Moses and his people. This includes animal sacrifice, the burning of incense, circumcision, ruler-priests, the Holy Name YHWH, and the solar imagery of the Habiru/Hebrews.

Of special interest is ancient Nubia between c. 3100 and 2300 B.C. This region was called by different names. The ancient Egyptians called the land south of the first Nile cataract "Ta-neh-su." In Tanehsu, they called the land between the first and second cataracts, Wawat. It was described as a region rich in gold. It may correspond to the Biblical description of the land of Ha-vilah. In 2007, archaeologists from the Oriental Institute discovered a 4000 year gold-processing center along the Nile in the region of Wawat. The site is called Hosh el-Guruf. More than 55 grinding stones made of granite-like gneiss were found at the site. The ore was ground to recover the gold and water from the Nile was used to separate the flakes from the particle residue.

Geoff Emberling, Director of the Oriental Institute Museum and a co-leader of the expedition that discovered the gold working operation at Hosh el-Guruf, reported that his team also discovered a cemetery at nearby al-Widay with high-status pottery vessels that appear to have been made at Kerma, about 225 miles away. Wi means mummy in ancient Egyptian. The earliest mummification took place among the Saharans who discovered that the bodies that were buried in the desert and covered with sand became mummies through a natural process. Some of these mummified persons have been found in pan graves.

The al-Widay cemetery included 90 closely packed stone circles. The covered shafts were circular and lined with stones, a typical feature of the Pan Graves of Proto-Saharan nobility. Pan Grave cemeteries have been found at a number of sites in Sudan, Egypt and Ethiopia. These graves are associated with the Beja, an ancient metal working people of the Sahara. The Egyptians called them "Medja-yu." They brought gold to Egypt from mines deep in the heartland of Nubia. At the Temple at Dendur in Nubia the sons of a local Beja chieftain, Pedisi and Pihor, are honored. Ped-isi refers to Hathor who was later called Isis, and Pi-hor refers to Horus.
Kerma was one of the most important centers of ancient Nubia. In a royal cemetery to the east of Kerma, four massive grave tumuli were discovered. They contained several hundred human remains and were surrounded by thousands of cattle skulls. This was a common burial practice among to the Nilo-Saharan cattle people, often referred to as the C-Group Culture (2300-1550 B.C.). C-Group cemeteries ranged from Heliopolis (Biblical On) to Ethiopia.

Wawat clearly had a long history of occupancy by Nilo-Saharan peoples. It appears to be the region of Nubia's trade with the Upper Nile and the Sahara. They traded incense, copper, gold, shell artifacts, semiprecious stones, and perhaps Nubian beer which was laced with tetracycline.

In 2300 B.C., the peoples living between the first and second cataracts were under different rulers. The territories were called Irtjet, Setju, Medja, and Wawat. Later all of the land between the first and the second cataracts was called Wawat. The kingdoms of Irtjet and Setju were brought under Wawat's ruler and Wawat became the center of government for that region of the Nile. Under Pepi II, pharaoh of the 6th Dynasty, Pepinakhte Hekiab led a campaign against Wawat and Irtjet, with an army of 20,000 with the determination to "hack up Wawat.” A reported 17,000 prisoners were taken and Pepinakhte compelled the "two rulers of Wawat and Irtjet" to travel to  and pay homage to Pharaoh. From the 12th Dynasty to Ptolemaic times the whole of Lower Nubia was called Wawat.

Old Kingdom texts (2980–2475 B.C.) mention Yam in connection to Wawat. Harkhuf', the governor of Aswan, made several journeys to Yam, according to his autobiography. His journey involved sailing and traveling by donkey, which suggests that Yam was in a more desert area of Upper Nubia, probably toward the hills. On Harhuf's third trip to Yam, three hundred donkeys were brought back to Egypt.The inscription on Harkhuf's tomb explains: "The majesty of Mernere my lord, sent me, together with my father, the sole companion, and ritual priest Iry, to Yam, in order to explore a road to this country. I did it in only seven months."

Harkhuf headed four expeditions to Upper Nubia and Yam in the reigns of Merenre and Pepi II. Harkhuf traveled by land across the hill country of Irtjet northwards, and in his travels he was dependent upon the troops of Yam who accompanied him. On one of these ventures he captured a pygmy, though he is called a "dwarf" in Breasted's translation. An excited young pharaoh promised Harkhuf that he would be greatly rewarded if the pygmy were brought back alive. This letter was preserved as a lengthy inscription on Harkhuf's tomb:

Come northward to the court immediately; [...] thou shalt bring this dwarf with thee, which thou bringest living, prosperous and healthy from the land of spirits, for the dances of the god, to rejoice and [gladden] the heart of the king of Upper and Lower Egypt, Neferkare, who lives forever. When he goes down with thee into the vessel, appoint excellent people, who shall be beside him on each side of the vessel; take care lest he fall into the water. When he sleeps at night appoint excellent people, who shall sleep beside him in his tent, inspect ten times a night. My majesty desires to see this dwarf more than the gifts of Sinai and of Punt. If thou arrivest at court this dwarf being with thee alive, prosperous and healthy, my majesty will do for thee a greater thing than that which was done for the treasurer of the god Burded in the time of Isesi, according to the heart's desire of my majesty to see the dwarf. (James Henry Breasted Ancient Records of Egypt, Part I 328ff)

Yam's central shrine city was at Kerma on the frontier between Irtjet and Setju. Kerma was likely the location of the "house of the ruler of Irtjet and Setju" mentioned in Harkhuf’s autobiography, and the ruler resided near the temple. Excavations at Kerma have uncovered a walled town surrounding a monumental mud-brick temple. Clearly Kerma was a place of rituals that included water purification and blessings.

The Nile is called yam, meaning "sea" in various Biblical references (Job 41:31; Na 3:8; Isa 18:2). Yam is comprised on two ancient lexemes: Y and M. The Y is the Y solar cradle, indicating divine appointment or anointing by the overshadowing of the sun, Ra's emblem. The form represents the long horns of the Saharo-Nubian cattle. These were venerated as the animal totem of Hathor-Meri, the mother of Horus. She is shown with the Y crown cradling the solar orb. Hathor was venerated at Yam, where her plant totem was the "southern sycamore," a type of fig tree.

The M also represents the concept of water. In ancient Egyptian mw or mu means water. YM suggests a place of anointed waters or a place of water rituals associated with the Horites, devotees of Ra, Horus and Hathor.

W is an ancient lexeme indicating a number of related ideas: Nile waters (wadj - green), purification (w'b.t), priest (wab), waves, effects of sun (w) and moon (warih), wandering or meandering, etc. The T is another ancient lexeme that speaks of crossing from one side to another, the solar arc, and the rising of the sun, or a bnbn, or a sacred pillar. The Egyptian word for the rising sun is wbn. The white crown of the Upper Nile was called the wrrt crown. Wrt means "great one." Wawat suggests a natural place for people to cross the Nile. The region was a place of commerce along ancient trade routes controlled by the authorities of the Nile shrines.

The Divine Name found on the sacrificial altar at the Almaqah temple in the Ethiopian Highlands bears a 7th century B.C. inscription with the name of Yeha (YH).This temple was constructed on the ruins of an earlier Nubian structure. As this was a mountain shrine with an elevation well above the Nile floodplain there is no W as in the Divine Name. The W was a symbol for the Nile waters.

The intermarriage of the Horite ruler-priest lines appears to be unbroken from the Genesis kings to the time of Jesus. This endogamous pattern suggests that the Horites were a caste, rather than an ethnic group. Abraham's Nubian ancestors are called "Kushite" in the Bible. However, the term is anachronistic since many of these ancestors lived before the time of Kush, Noah's grandson. 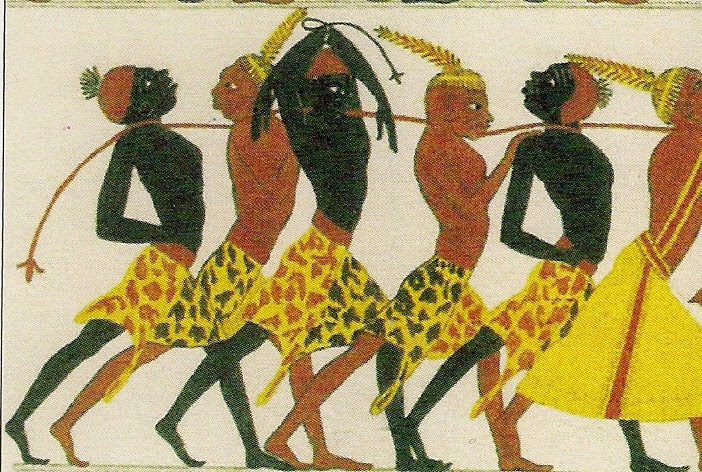 The  term "Kushite" must be understood to include many peoples: red Nubians, black Nubians, Nilo-Saharan peoples, Bedja, Anu, and Horites. Wenis (who reigned from 2356 to 2323 B.C.) recruited five different Nubian peoples when he assembled Pepi I's army for the military campaign to Canaan.

Archaeological, linguistic, and DNA studies indicate that the Nilo-Saharan peoples dispersed widely, and it is safe to say that many originated in the region of Nekhen (Hierakonpolis) in Sudan and Wawat in Nubia.

Related reading: The Urheimat of the Canaanite Y; Kushite Gold; The Locations of Yam and Kush and Their Historical Implications; Terah's Nubian Ancestors; Is Nehesi Related to the Name Nahor?; The Habiru Were Devotees of Horus; The Saharan Origin of Pharaonic Egypt; Boats and Cows of the Nilo-Saharans