Africa is archaeologically rich. Artifacts of stone, shell and egg abound throughout the continent. The age of settlements in Sudan has been pushed back to 70,000 years ago. In KwaZulu-Natal a 77,000- year-old mattress was fabricated from reeds and rushes. The bedding mats found at the Sibudu Cave site range over a period of 39,000 years. Researchers believe the inhabitants of the cave added a "top sheet" to the bedding made of insect-repelling greenery.
In Central Africa barbed points made of mammal bones were used to spear catfish in lakes. This 90,000-80,000-year Katanda harpoon is an example. 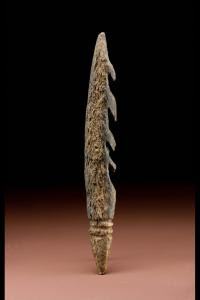 Stone, shell and ostrich eggs were widely used for tools, ornaments and utensils. Ostrich eggs were used to carry water. Researchers excavated ostrich eggshells used as water containers from deposits dated to 105,000 years ago at Ga-Mohana Hill North Rockshelter.
A large cache of decorated ostrich eggs found at Diepkloof Rockshelter dates to 60,000 years.
Ostrich eggs were used by prehistoric peoples of the Nile Valley as perfume containers, bowls for ablutions, and as canteens. Ostrich feathers were worn in the hair of warriors and rulers of ancient Egypt, and the Egyptian goddess Ma'at is shown with an ostrich feather in her hair. She weighed the hearts of the dead to determine who would enter eternal life. Painted ostrich eggs have been found in tombs at Nekhen (Hierakonpolis), the oldest known site of Horite Hebrew worship. They also have been found and in some graves of children in ancient Nubia. Decorated ostrich-egg vessels and ostrich shell beads have been found at Natufian sites in modern Jordan and at Natufian burial grounds dating to 16,000 years ago. Some scholars believe that the Natufians moved into Canaan and Jordan from North Africa.
In some astronomical drawings the ostrich represents the Winter Solstice. The ostrich is placed between the Bull (symbol of the Autumnal Equinox) and the Griffin Vulture (symbol of the Spring Equinox). This is reflected in Elihu's discourse on the transcendence of the Creator in the book of Job. 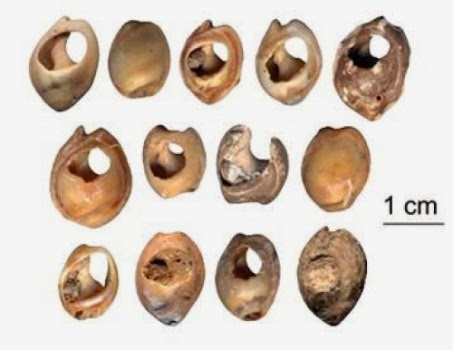 Dating from 82,000 years ago, these beads are thought to be the oldest in the world.
(Credit: Marian Vanhaeren and Francesco d'Errico / 2007

These perforated shell beads were unearthed by archaeologists in the Cave of Pigeons in Taforalt, north-east Morocco and date to c. 82,000 years. The cache consisted of 13 shells belonging to the species Nassarius gibbosulus. Some of the shell beads are covered with red ocher.

The stone tools discovered with the shells were sharp biface points typical of Aterian technology in North Africa. They were probably used as spearheads.

Related reading: The Role of Climate Change on African Stone Age Technology; Discovery of the Oldest Adornments in the World; Africa is Archaeologically Rich; The Ostrich in Biblical Symbolism; In Style in the Stone Age; Archaic Shell Technology