The data of Genesis suggests that Abraham's territory extended on a north-south axis between his two wives Sarah and Keturah. Sarah resided in Hebron and Keturah resided in Beersheba. Abraham had wells in Gerar to the west and likely watered his livestock to the east at Engedi. There were ancient routes between these places. 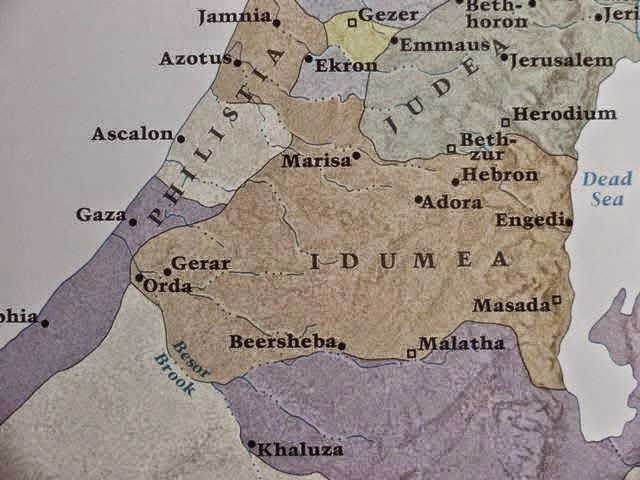 Tel 'Eton is a prominent site that covers about 15 acres, and is located some 11 km east-southeast of Tel Lachish (2 km to the south of Moshav Shekef). The ancient city is situated near an important junction between the north-south road that meandered along the trough valley connecting the Beersheba valley and the Ayalon valley, and the east-west road that connected the coastal plain and the Shephelah with Hebron.

See the report on the Tel 'Eton excavations here.

Hebron, Tel 'Eton, and Beersheba were in ancient Idumean or Edom.

At Tel 'Eton rock tombs from the Israelite Period have been found. Lions flank the steps descending from the entrance at Tomb One. Two scarabs were found in this tomb.

The sides of the passage of Tomb Two are raised by courses of large stones. In this tomb a cross was scratched on the wall near one of the niches.

Related reading: The Ethnicity of Abraham and David; Edo, Edom, Idumea; Edom and the Horites; Tombs From the Israelite Period at Tel 'Eton by Dr. David Ussishkim