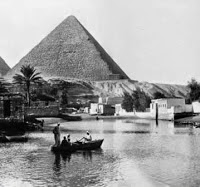 Biblical Kush was a vast region that included Egypt, Sudan, Nubia, the coastal areas of the Horn of Africa, and the Afro-Arabian populations living in Ramah, Sheba and Dedan.

DNA studies show "genetic unity and linkage" between the Sudanic, Egyptian, Nubian and other Nilotic peoples, as well as some populations of the Horn of Africa. (Yurco (1996), Keita (1993, 2004, 2005) Lovell (1999), Zakrewski (2003, 2007). The Copts are one of the oldest Egyptian populations. This is based on the relatively high frequency of the B-M60 marker (c.60,000 BP), indicating early pre-dynastic colonization of Egypt by Upper Nilotes.

These are the peoples among whom the themes of Genesis 1-3 are found.

The Nilotic Kushites were expert pyramid builders, as were their European kinsmen the Kushan. They build thousands of pyramids across the ancient world. Some have been located in Niger and other parts of the Sahara. Many along the Nile Valley. Pyramids have also been found in Bosnia, and Southern China.

In addition to building pyramids, the Kushites buried their dead in underground tombs. Here is a report on excavations at this Nile cemetery near the modern-day village of Dangeil.

Several of the tombs have been excavated and archaeologists have found artifacts such as a silver ring, engraved with an image of a horned deity. They also discovered a faience box, decorated with large eyes, called "udjat" and generally recognized as the eyes of Horus.
One of the more intriguing discoveries at the Dangeil tombs is seven blessing bowls. The seven bowls are attached; six of the bowls surround a central bowl. Ancient Nilotic and Mesopotamian priests used bowls to bless and to curse. These are called "incantation bowls" and the blessings or curses are inscribed inside the bowls. 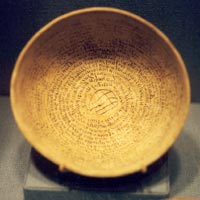 The construction of such tombs required skills in mining engineering. The Kushites were known to have sophisticated mining operations in the Nuba Hills where they mined gold and in Edom where they mined copper.