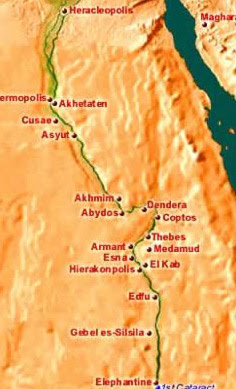 The Upper Nile was extremely fertile and had a more diversified population than the Lower Nile region. It was governed by kingdom-building rulers, such as Menés, who is believed to have been the first to unite the peoples of the Upper and Lower Nile Valley. If this is so, his kingdom would have stretched from Abydos to the Mediterranean.

Menes (Mena, Min) was born  c. 2925 B.C., a descendant of the "Horus-people" or the "Falcon-people" (Horus's aviary totem was the falcon.) Menes consolidated the districts around the First Cataract of Aswan and advanced to the north, a movement that led to the unification of the Nilotic populations.

The Falcon people had as many as 50 kings, so Menes represents a very ancient royal lineage. To Menes is attributed the oldest legislative system in history: the law of Tehut. An image of Menes is found on the Supreme Court building in Washington D.C. The South and North wall friezes depict a procession of 18 lawgivers and Menes is the first.

Menes has been identified with Narmer or with a Kushite ruler whose Horus name was Ahauiti. The tombs of both rulers have been excavated at Abydos, the largest tombs of that time in Egypt.

Whether Menes was Narmer or Ahauiti, his unification of the Upper and Lower Nile established him as the founder of a new House/Dynasty. This remained the case even after Mentuhotep II reunited Egypt after the 1st Intermediate Period.  Instead of being recognized as the founder of a new House, Mentuhotep II was considered a ruler of the 11th Dynasty.

The figure below was drawn by Faucher-Gudin after Prisse d'Avenues. The gold medallions engraved with the name of Menés are ancient, perhaps dating to the 20th dynasty. However,  the setting is modern, with the exception of the three oblong pendants of cornelian.


Manetho of Sebennytos, an Egyptian historian, wrote a history for the use of Alexandrine Greeks. Manetho's Aegyptiaca divides ancient Egyptian history into 31 dynasties from Menés to the Macedonian Conquest. All the families inscribed in his lists appear to have ruled in succession, however this has not been fully confirmed by archaeological discoveries. The problem is that Manetho's accounts come from a much later period between 380-343 B.C. and his division is based on historical facts as well as mythology and folklore.

Manetho was a priest during the reigns of Ptolemy I and Ptolemy II who apparently was given the assignment of caring for the royal horses, a high ranking position.  This is indicated by his name - mniw-htr - which means "keeper of the horses."

As a high ranking royal priest, Manetho had access to the temple archives. These included king lists (such as we find in Genesis 4, 5, 11, 22:20-24 and 36). Doubtless there were conflicting claims as rulers vied for acclaim, often introducing mythological accounts to support their authority.

According to Manetho, Menés reigned 62 years and was killed by a hippopotamus.

Some scholars believe that Menés was Ahauiti on the basis of an ivory tablet engraved for a ruler whose Horus name was Ahauiti, the warlike. The actual name that appears on the tablet is Manu. Menés has been various spellings, including Mena, Meni, Manu, Min or simply MN.

According to Manetho, Menes was a native of the Thinite province in Upper Egypt. Monuments belonging to Narmer and Ahauiti, either of whom may be Menes, have been excavated at Abydos, a royal cemetery in the Thinite nome (Tjenu). The earliest evidence of Tjenu as a ruled territory dates to 4000 B.C. the time when the Horite citadel of Nekhen was thriving. The Narmer palette was unearthed at Nekhen.

Nekhen (Hierakonpolis) was a prestigious shrine city of the Horus people, the Horites. Their descendants who were priests are identified in the Bible as Horite Hebrew (Gen. 36). Nekhen appears to be the oldest known site of Horite Hebrew worship. Votive offerings at the Nekhen temple were ten times larger than the normal mace heads and bowls found elsewhere, suggesting that this was a very prestigious shrine. Horite priests placed invocations to Horus at the summit of the fortress as the sun rose.

Whether Menés is Narmer or Ahautit, his tomb lies near the village of Nagadeh, not far from Thebes, while those of his immediate successors are in the cemeteries of Abydos. The Nagadeh tomb is a rectangular brick structure 165 feet long and 84 feet wide. The external walls were originally ornamented by deep polygonal grooves, resembling those which score the facade of Chaldaean buildings, but the Nagadeh tomb has a second brick wall which hides the primitive decoration of the monument. The building contains twenty-one chambers.

How are we to reconcile the tradition of Menés' Thinite origin with the existence of his tomb in distant Thebes?  It is likely that he maintained two queens in separate palaces. One would have been at the southern boundary of his empire and the other at the northern boundary. This was a characteristic of the marriage and ascendancy pattern of the ancient Horite rulers.

The principal deified ruler of Abydos was called An-hor, which indicates that he was a devotee of Hor/Horus. This is the ruler line from which Abraham's Horite Hebrew people came.


Related reading: The Writing System of Menes, the First Lawgiver; A Kindling of Ancient Memory; Abraham's Annu Ancestors; Who Were the Horites?; Ancient Moral Codes