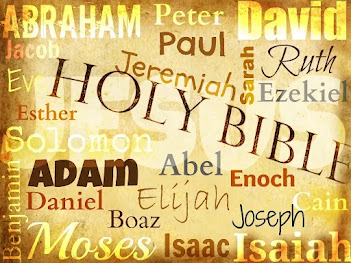 2.      Occupation: One of Abraham's nephews was named Tahash, meaning tanner.

Royal Names
When reading the Bible, it helps to be aware of names and titles. Some of the early Hebrew held royal titles such as Enoch and Lamech. Enoch refers to one who succeeds as the ruler's proper heir. Lamech is related to the word Melek, meaning king. La-melech appears on several thousand Egyptian and Hebrew seals (Holman Illustrated Bible Dictionary, p. 95). Achimelech means “brother of a king". The royal titles Enoch and Lamech are found in the king lists of Genesis 4 (the line of Cain) and Genesis 5 (the line of Seth).
Horus Names
These early rulers were Hebrew and among them we find high-ranking persons with Horus names. Hur is an example. According to Midrash, Hur was Moses’ brother-in-law, the husband of Miriam. Hur’s grandson was one of the builders of the Tabernacle. I Chronicles 4:4 lists Hur as the "father of Bethlehem", an early Horite Hebrew settlement.
A chief of the tribe of Asher holds the Horus name Harnepher (1 Chronicles 7:36).
Another Horus name is Na-Hor, the name of Abraham's older brother. Nahor ruled over his father's territory in Paddan Aram when Terah died. In ancient Akkadian, Na is a modal prefix indicating service to, affirmation, or affiliation. Na-Hor indicates that this man was a devotee of HR, which in ancient Egyptian refers to the Most-High God.
HR also refers to the Son of God who the Greeks called Horus. His Horus name suggests that Nahor was a Horite Hebrew. A prayer addressed to Horus says, "For you are he who oversees the gods, there is no god who oversees you!" (Ancient Pyramid Texts, Utterance 573)
A Horite priest (Sangu sa huru - priest of Horus) is mentioned among five priests in an Assyrian document (SAAB 9 127) from the city of Assur. The document is dated to 639 B.C. The Horite priest is named Qibit-Assur.
Words for Priests

Some names indicate that the person was a priest. Examples include Terah and Korah. Terah/Tera is a very ancient word for priest. This image found by Flinders Petrie shows a Sethite Hebrew priest. He is a priest (tera) devoted to God (Neter/Netjer). 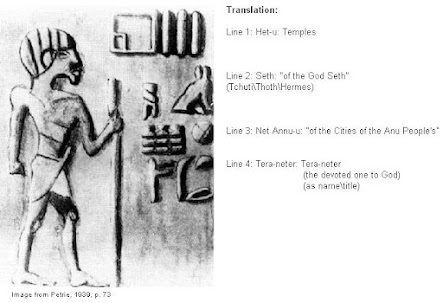 The word Korah refers to a priest who shaved his body as an act of ritual purification before his time of service at the temple or shrine. One of Esau's sons was named Korah (Gen. 36:5), as was Moses' brother who challenged his leadership (Num. 16).

Korah's descendants are praised in 1 Chronicles 26, where they are grouped with the gatekeepers of Obed-Edom. Obed-Edom is a connection to Ruth, who named her first-born son Obed. Obed was the father of Jesse, the father of David. This picks up the Messianic thread, pointing us back to the early Hebrew expectation of the Son of God who was coming into the world.

Another word for priest is the Hebrew ‘Kohen’, equivalent to the Arabic Khouri or Kahin and the Persian Kaahen or Kaahenaat which is translated "timeless being". Kahenat means priest in the Ethiopian Church.

Other ancient words for priests include harwa, sem, wabau, kalu (lamentation priest), hekau, and šangû. The Akkadian term šangû is the likely origin of the Latin word saguis and the English word sanguine, both referring to blood. The šangû probably offered animal sacrifice at royal sanctuaries.

Patronymics
A patronymic is a personal name based on the given name of one's father or a famous male ancestor. These names are identified by the word bar, meaning son or male descendant. In Numbers 13, Caleb is designated Kalev ben Jephunneh. 1 Chronicles 2:19 refers to Hur ben Kalev. Patronymics are common in the Hebrew Bible.
In some cases, high ranking women are also identified with a famous male ancestor. One example is Bath-Sheba, Solomon's mother. She was of the royal house of Sheba. This is why one of the entrance pillars of the Temple commemorates Jachin, a name associated with the clan of Sheba.
Patronymics are also found in the New Testament. An example is the name Bartholomew, the Aramaic patronymic Bar-Talmai.
Matronymics
A matronymic is a personal name based on the given name of one's mother, grandmother, or any female ancestor. Matronymics are not as common among the Hebrew as patronymics, but they do appear in the cases of Hebrew women of social influence, prestige, and wealth. An example is found with the Virgin Mary's full name: "Miriam Daughter of Joachim, Son of Pntjr". Some editions of the Talmud name Jesus as the son of a Roman soldier named Pantera, discrediting his miraculous conception as the Son of God. However, Pntjr refers to Joachim's mother, the maternal great grandmother of Jesus Messiah.
From pre-dynastic times among the Nilotic Hebrew, ntjr designated God or the divine. The name Pntjr is Pa-Netjer, the name of Joachim’s mother. She must have been of high social status for a matronymic to be employed. That Panetjer is a matronymic is evident from a limestone stela (1539-1291 B.C.) at the Brooklyn Museum bearing the names of Pekhty-nisu and his wife Panetjer. It is certain that Mary’s ancestors were high ranking ruler-priests because even those who hated her admit this in Sanhedrin 106a which claims: “She who was the descendant of princes and governors played the harlot with carpenters.”
Related reading: Horite and Sethite Mounds; Belief in the High God; The Hebrew Were a Caste; The Sethites and the Red Hippo; Ancient Words for Priests; Royal Names in Genesis
Posted by Alice C. Linsley at 5:54 PM