The Six Cities of Refuge 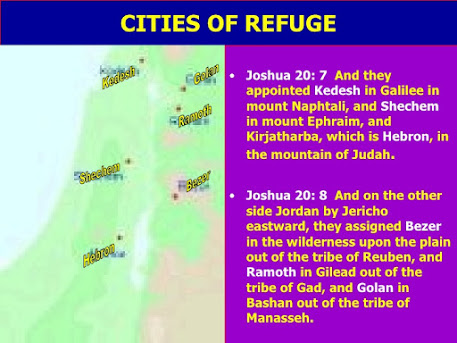 The Bible speaks of cities of refuge. They are Bezer, Golan, Hebron, Kedesh, Ramoth, and Shechem. Of the 48 settlements assigned to the Levites, only these 6 were to provide refuge for the person who was found innocent of killing another human.

The cities of refuge were home to priestly clans, which suggests that the person seeking refuge was examined by men trained in the law who also could offer sacrifice and ritual cleansing of blood guilt. The blood that fell to the ground polluted the place. It cries out to God (Gen. 4:10). The one who murders deserves death, but God alone knows to work perfect justice. Cain’s killing of his brother brought him banishment. Perhaps the idea of a city of refuge begins with the city Cain established (Gen. 4:17).

Killing another human imposed blood guilt on the killer, even if the killing were accidental or unintentional. Blood was viewed has having power. Warriors became polluted after combat and sought ritual cleansing to relieve them of blood guilt. This is what Melchizedek did for Abraham after the battle of the kings. Melchizedek, the Jebusite ruler-priest of Jerusalem, also ministered to his Horite kinsman Abraham by providing bread and wine (Gen. 14:18).

People who accidentally kill another human need the ministry of a priest because priests are trained to hear confessions, pronounce absolution, and can offer the Eucharist with special intention for the deceased and the living victim. In our time, no such provision is made for the innocent who kill or for returning warriors.

It is likely that the custom of sanctuary cities predates the time of Moses. Abel Beth Maacah appears to have been a city of refuge and its areas  F, O and B date to the Middle Bronze Age (2200-1570 BC). Sheba fled there to escape capture by David’s men (2 Sam. 20:14-22). It was a city of great antiquity, and before the time of Moses it was known as a place where serious disputes were resolved (2 Samuel 2:18). About the city, “They used to say in the old days, ‘Let them inquire at Abel’; and so they would settle a matter.” (New Revised Standard Version)

Abel Beth Maacah appears to have been influenced by the Phoenicians and the Arameans. In 2017, a small faience head of a bearded man was found there that is Phoenician in style. Also Tel Abel Beth Maacah is in close proximity to the Phoenician coast. The city’s location allows passage north to Ijon (Tell ed-Dibbin) in Lebanon’s Marj Ayyun Valley, and west to Tyre and Sidon. It was also the gateway to the Arameans.

It is known that the Phoenicians provided shrines and sacred precincts as refuges for fugitives. The Horite Hebrew among the Arameans also probably provided refuge sites, especially since all 6 refuge cities of Israel can be traced back to the Horite Hebrew ruler-priest caste which was dispersed from the Nile to Mesopotamia.

Bezer was of the Horite Hebrew clan of Merari, son of Levi, son of Jacob, son of Isaac, son of Abraham, son of Terah, son of the Aramean ruler-priest Nahor the Elder (Gen 11:22-32). Na-Hor means "One devoted to Horus." Early Bronze Age (3100-1200 BC) finds have been uncovered here, including a wall in Field W2 and a 4-room house in Field C.

Hebron was at the northern boundary of Abraham's territory and Abraham was Horite Hebrew. Hebron was called Kiriath-Arba. Arba was the father of Anak, one of the "mighty men of old" (Gen. 6). Arba or Arbu may have been a fugitive, like Cain. The term arbu in ancient Akkadian means fugitive or runaway.

Kadesh was under the Gershon branch of Levites (Josh 21:32). Gershon was a son of Levi, son of Jacob, son of Isaac, son of Abraham, son of Terah, son of Nahor.

Ramoth (Deut.4:43; Josh 20:8, Josh 21:38) belonged to Gad, Jacob's seventh son (1 Kings 4:13). There appears to have been close relations with Bashan and with Jair, son of Manasseh, son of Jospeh, son of Jacob, son of Isaac, son of Abraham, son of Terah, son of Nahor. The king's official in Ramoth had authority over the land of Argob in Bashan and the towns of Jair (Yair) in Gilead. Jair judged Israel for 22 years. His inheritance was in Gilead through the line of Machir, the son of Manasseh.

Jair is a Horite Hebrew name associated with the Horite Hebrew settlement of Bethlehem (1 Chron. 4:4; 1 Chron. 2:51). After David became king, he brought the ark "from the house of Abinadab, that was in Gibeah” to Jerusalem (II Sam. 6:1-12). However, for three months the ark rested in David’s hometown of Bethlehem on the property of Obed-Edom and it was guarded by Jair of Bethlehem.

Shechem was a place of worship for Abraham and Jacob, both of whom built altars there. Genesis 34:2 specifies Shechem as a Hivite or Horite settlement. E.A. Speiser called attention to Hurrian/Horite personal names associated with Shechem and with other areas whose inhabitants the Bible calls Hivites. He noted the juxtaposition of the Hurrian Jebusites and the Hivites in various biblical references and he concluded that “Hivite” was a biblical term for Horite/Hurrian. Speiser supported his identification of the biblical Hivites with the Horite/Hurrians by reference to Genesis 36:2 and 36:20, where the terms Hivite and Horite are used interchangeably. In Genesis 36:2, Zibeon is called a Hivite, and in Genesis 36:20 Zibeon is identified as a Horite descendent of Seir.

A detailed look at the history of the 6 cities of refuge suggests that they were under the authority of the Horite Hebrew ruler-priests and the establishment of refuge at shrine cities should be credited to this very ancient caste of royal priests.

Related reading: Who Were The Horite Hebrew?; The Faith of the Early Hebrew Delivered to Us; Hebrew Priests in Aram, Edom, Moab and Judah; What Fugitives Faced in the Cities of Refuge