Resolving the Lukan and Matthean Genealogies 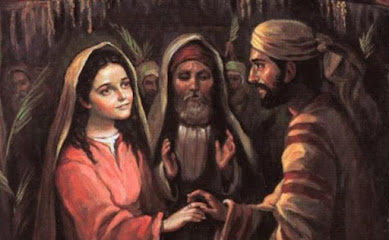 The Betrothal of Joseph and Mary
Nathan is named as one of David's sons in 2 Samuel 5:1; 1 Chronicles 3:5 and 14:4. Luke's list of ancestors is traced from King David through his so Nathan (Luke 3:31). It appears that he was Solomon's older brother. One theory is that Nathan may have been viewed as David's legal heir by right of primogeniture. However, it more likely that Luke's tracing of Jesus' ancestry through Nathan and Matthew's tracing through Solomon (Matthew 1:6) is because the lines of the brothers Nathan and Solomon intermarried.
The pattern of rulers taking marriage partners from their brother's family is evident with Cain and Seth, Ham and Shem, and Abraham and Nahor. The daughters of ruler-priests married the sons of ruler-priests from patrilateral clans.
It is likely that Luke's list traces Jesus' ancestors through his mother. A reference in the Talmud refers to "Mary daughter of Eli" and we know that these ruler-priests had more than one name. According to Patristic tradition, Mary's father was called Joachim. A king of Judah (reigned 609–598 BC) named Jehoiakim had the birth name Eliakim, which is shortened to Eli. Jehoiakim is a variant of Joachim.
The expectation of Messiah, preserved through thousands of years by the Hebrew, focuses on the clan of Judah. Matthew 1:1–6 and Luke 3:32–34 are in agreement on that.
Abraham
Isaac
Jacob
Judah
Perez – son of Tamar by Judah
Hezron
Ram (Aram)
Amminadab
Nahshon
Salma (or Salmon), married Rahab
Boaz, married Ruth
Obed
Jesse
David

But unto the sons of the concubines, which Abraham had, Abraham gave gifts, and sent them away from Isaac his son, while he yet lived, eastward, unto the east country.

Mattaniah means “gift of God” and is a name found among the priests in I Chronicles.
Related reading: The Virgin Mary's Ancestry; Joseph's Relationship to Mary; The Royal Priest Lines of Matthew; The Lines of Ham and Shem Intermarried; The Lamech Segment Analysis
Posted by Alice C. Linsley at 12:58 AM