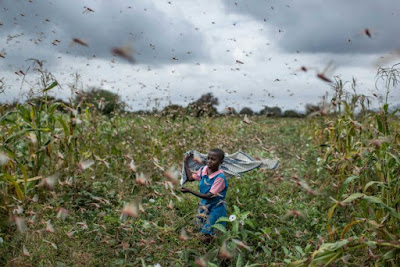 Girl trying to drive away locusts in Kenya

In the Bible divine disfavor is expressed by catastrophic events in nature. Examples include floods, droughts, the destruction of crops by locusts, and plagues.

Noah's flood is explained as an expression of God's wrath against sinful humanity, a message that seems contrary to the message of John 3:16, 17.

Droughts were common in the Ancient Near East where the people believed that everything in nature was under God's control. In this context, droughts, famine, and plagues would be seen as signs of God's disfavor.

Drought and famine were regarded as signs of God’s disfavor. When the people disobeyed, judgment came on the land by drought and famine (Lev. 26:23-26; Deut. 11:16-17; 1 Kings 8:35). This belief is expressed in apocalyptic passages of the New Testament also. Matthew 24:7 and Revelation 6:8 speak of famine as evidence of God's judgment in the last days.

The plagues of Egypt have a natural explanation though we cannot explain the miracle of their timing. In Exodus 9, we read that the Egyptians developed boils, skin inflammation, and the cattle were dying due to a bovine disease, possible anthrax. The boils likely developed from drinking the Nile water turned toxic from a red algae bloom. The skin irritation appears to be linked to volcanic ash (Ex. 9:9), and anthrax can be triggered by changes in moisture, soil nutrients, and sugars.

There are conceivable natural explanations for the plagues and their outcomes in the order they occur, but only the Creator can make these things happen at exactly the time Moses declared them to happen. (See Science and Miracles.)

There is nothing in the Bible about pandemics. Communicable diseases were concentrated in urban centers. The more sparsely populated regions like Mongolia, the Tundra of North America, and remote villages in Africa were often spared.

On the other hand, the biblical writers present positive developments as signs of divine favor. They often use "visitation" to express this. The theme appears in Exodus 3:16-17 where God tells Moses to gather the elders and tell them, “I have surely visited you…” and God promises to bring the people to “a land flowing with milk and honey.”

In Ruth 1:6, Naomi plans to return to Bethlehem because she has heard that “the Lord had visited his people” and there was food once again. Abraham was favored when the Lord visited him at Mamre and announced that Abraham would have an heir by Sarah (Gen. 18). In Genesis we read, “And the Lord visited Sarah as he had said, and the Lord did unto Sarah as he had spoken. For Sarah conceived, and bare Abraham a son in his old age.” (Gen. 21:1-2)

1 Samuel 2:21 says, "The Lord visited Hannah; and she conceived and gave birth to three sons and two daughters. And the boy Samuel grew before the Lord."

Considering these examples, it becomes apparent that God's visitation involves deliverance to a new life and the fulfillment of a promise concerning a Son.