This mummy known as "Ginger” died around 3400 BC or earlier. His mummified body was found in a cemetery at Gebelein, Egypt. Ginger was a young man who apparently died from a stab wound. His mummified remains were found in a crouched position in a shallow pit. Direct contact with the hot, dry sand naturally mummified his body. 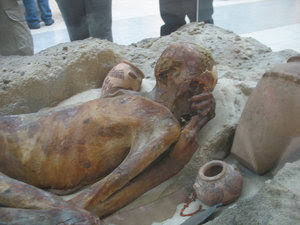 
According to Dr. Janet Davey, a forensic Egyptologist from the Victorian Institute of Forensic Medicine in Australia, some ancient Egyptians were naturally blond or red haired. 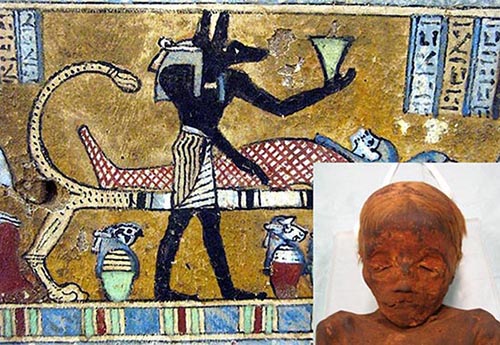 Some Egyptologists believed that the hair color of the mummies became lighter due to the process of mummification which involve natron. Natron has bleaching properties. However, Dr. Davey undertook a series of experiments with “16 hair samples from Egyptian people in the salty ash for 40 days and no change in hair color was observed. 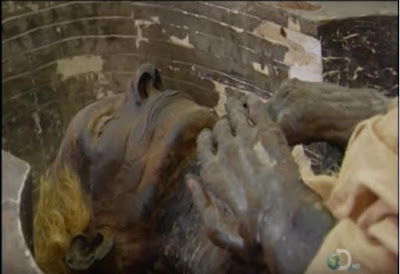 Yuya was a powerful Egyptian courtier during the Eighteenth dynasty of Egypt (c.1390 BC). He was married to Tjuyu, an Egyptian noblewoman associated with the royal family, who held high offices in the governmental and religious hierarchies. Their daughter, Tiye, became the wife of Amenhotep III.

At Nekhen on the Nile, archaeologists have found a redheaded man in Burial no. 79. The beard of the man had been trimmed with a sharp blade. The Nekhen News (p. 7) reports, "The vast majority of hair samples discovered at Nekhen were cynotrichous (Caucasian) in type as opposed to heliotrichous (Negroid)." Nekhen was founded as a Horite shrine city before 4000 BC.

Red haired mummies have also been found in pyramids in the Tarim Valley in southwest China. The oldest Tarim Mummies found in China date from 1900 B.C. The so-called "Ur-David" mummy (shown below) was tall and had red hair. This mummy, also called Cherchen Man or Chärchän Man, dates to about 1000 B.C. 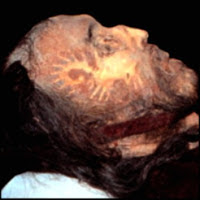