The ACNA and the Priesthood of the Church 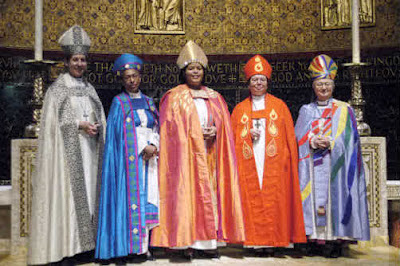 Women "bishops" of the Episcopal Church

This has been a difficult article to write due to the strength of my conviction that women’s ordination to the sacred order of priests is a dangerous innovation that will continue to cause division in the Anglican Church in North America. It is unfortunate that this practice carried over from the Episcopal Church.

I have been speaking and writing on this subject for over 15 years, mainly from the perspective of Biblical Anthropology, but also from personal experience as a former priest in the Episcopal Church. I have no illusion that what I say will change the minds of those who hold their positions with equally firm conviction.

The ACNA College of Bishops recently heard from three women on the subject of women in ministry. Two of the women are ordained and one is a lay person. If the bishops are earnestly interested in listening to all views, what I offer here may be helpful. I speak as a woman in lay ministry.

I am not hopeful that a catholic resolution on the question of women priests can be achieved in the ACNA. Anglicans appears to relish theological ambiguity and our bishops do not insist on uniformity of doctrine and practice when it comes to nonessentials. That the all-male priesthood touches the heart of the Messianic Faith that we call “Christianity” does not sway the supporters of women’s ordination. Nor do they appear to be disturbed by the tension this innovation creates in ecumenical relations with bodies that uphold catholic orders.

Anglicans claim Scripture as our central authority, yet supporters of women’s ordination obfuscate the fact that not a single woman priest is found in the Bible. Many are proud of the “reformed” nature of the Anglican Way, yet they are unwilling to reform to the received Tradition of the all-male priesthood. They do not recognize the truth of Father Louis Tarsitano’s words: “The priesthood of Christ, and that representative priesthood rooted in Christ's priesthood is changeless. To change it is to change the New Testament itself.”

On the question of women priests, Archbishop Edmund Akanya of the Anglican Church of Nigeria has stated: “Our position as a church is that it runs counter to scripture and more so our culture. Even the women themselves are seriously opposed to women’s ordination. This position has been held before I became a bishop. In fact, it is looked at as something that led to the issue of human sexuality today.”

Archbishop Akanya is justified in this view since the first woman ordained to the priesthood in the Episcopal Church (following the decision of General Convention) was Ellen Marie Barrett, a lesbian who served with gay activist Louie Crew as co-president of Integrity. She was ordained in 1977 by the social activist Bishop Paul Moore of New York.

The critical moment for affirmation of the catholic position on the priesthood has long passed. At the inception of the Anglican Church in North America, the lead Bishops unanimously agreed to work together for the good of the Kingdom. As part of this effort, different positions on the ordination of women would be acceptable in a spirit of mutual love and respect, and a desire to move forward for the good of the ACNA. This commitment was embedded in the Constitution and Canons overwhelmingly adopted by the Inaugural Assembly in 2009.

It is unfair, therefore, to accuse the Bishops of "kicking the can down the road" on women’s ordination. They are doing exactly what they agreed to do. As Bishop Jim Hobby said in response to questions about the three women’s presentations to the House, “From my limited experience and perspective, I see bishops engaging in respectful conversation about theological differences while working together to strengthen the Church and to reach the world with the Gospel.”

In the Victoria Statement, the ACNA bishops expressed regret that they had not been more supportive of women in ministry. The Bishops met in Victoria, Canada in September 2017 to discuss holy orders and the role of women. At that meeting they said, “We have not effectively discipled and equipped all Christians, male and especially female, lay and ordained, to fulfill their callings and ministries in the work of God’s kingdom. We repent of this and commit to work earnestly toward a far greater release of the whole Church to her God-given mission.”

As part of that commitment, a Bishops’ Working Group on Holy Orders was formed. This group is co-chaired by Bishop Clark Lowenfield and Bishop Jim Hobby. (Bishop Hobby’s wife, Shari, is an ACNA priest.)

The bishops should not be overly hard on themselves. They inherited this conflicted condition and they are saddled with it. Though most ACNA bishops do not favor women’s ordination, female priests is now the cultural norm in the ACNA. Given what I have learned from anthropology about cultural change, I doubt the ACNA can reform to the biblical norm.

The preservation of a fragile ACNA coalition is more important than the boundary stones set up by our holy ancestors (Proverbs 22:28). Those markers enable us to discern and avoid errant paths.

The Anglican Church in North America has been permanently corrupted by the adoption of a practice from TEC. The polity of the ACNA is such that no leader has the authority to correct this. In effect, the ACNA has a crisis of authority.

As an anthropologist, I've studied how outside innovations can gradually and completely change the social fabric of a community if they are adopted. Rarely does the community return to the original pattern. If there is a return to the community's native pattern, it is because a very strong leader makes that happen. A biblical example is King Josiah who removed the celestial horses from the temple entrance probably because these had come to symbolize shamanist practices such as bestiality in a royal fertility ritual, and human and horse sacrifice among some populations.

The Church is a conserving entity by which God preserves right belief and right actions in the service of humanity. Unfortunately, the conservation of wildlife and the environment have become higher priorities than the conservation of Scripture and Tradition. Social justice ranks above preserving the Gospel ministry of the all-male priesthood. Feminism, and its underlying Marxist worldview, dictates our thinking about the roles of men and women in the Church.

In his treatise “Priestesses in the Church,” C. S. Lewis observed, “The innovators are really implying that sex is something superficial, irrelevant to the spiritual life. To say that men and women are equally eligible for a certain profession is to say that for the purposes of that profession their sex is irrelevant. We are, within that context, treating both as neuters. As the State grows more like a hive or an ant-hill it needs an increasing number of workers who can be treated as neuters. This may be inevitable for our secular life. But in our Christian life we must return to reality.”