The prehistoric settlement of Çatalhöyük has fascinated researchers for decades. The site reveals a very sophisticated way of life. There were temples and the priests of Çatalhöyük wore leopard skins like the ancient Nilotic priests. 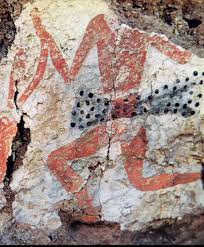 Excavations at Çatalhöyük reveal primary and secondary burial, obsidian blades, a clay stamp seal, and more than 2000 zoomorphic clay figurines. The majority are representations of cattle, sheep and goats. Copper beads found in 8,500-year-old graves at Catalhöyük were made by hammering native metal found in nature.

The trapezoid shape appears to have been an important symbol among the peoples of this region. The pillars at Göbekli Tepe have a trapezoidal shape. Many of the pits at Blagotin in Serbia have entrances with the trapezoid shape. The architecture of the later Hittites included trapezoidal doors such as this entrance to the chamber of Suppiluliuma II in Hattusa. 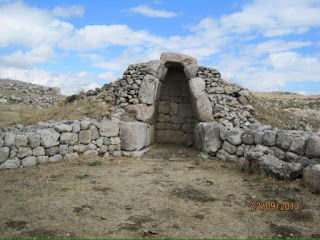 In many houses at Catalhöyük the main room was decorated with plastered bull skulls (bucrania) set into the east or west walls. These reflect the religious sun symbolism of these archaic people and the same symbolism is found among the later Hittites of Anatolia also. The bull with the sun resting on its horns represented the overshadowing presence of the Creator, whose emblem was the Sun.


Analysis of the foods in ceramic vessels reveals that the people of Çatalhöyük put both milk and meat in the same container. They also herded and ate pigs. Clearly, they were not observing Kosher guidelines. Jewish dietary law (Kashrut) dates to the latter Neo-Babylonian Period (c.730-500 BC).

The dietary restrictions outlined in Deuteronomy and Leviticus are the work of the Deuteronomist Historian, a Neo-Babylonian source. In the Book of Daniel we find three Jewish men insisting on eating differently as a way to express their ethnic and religious identity. This is one of many ways Jews have to distinguish themselves from their non-Jewish neighbors. Archaeological excavations of Iron Age I sites in Israel have shown that pigs were entirely absent from the herd-based economy of the Israelites though they were a food source for all the other peoples of the region. According to Ronald Hendel, such culinary distinctions soon became codified markers of cultural identity, whereby “the Philistine treat became an Israelite taboo.”

The diet of the people of Catalhöyük appears to have been varied and relatively nutritious, according to a recent report (October 3, 2018) from the Max Planck Institute for the Science of Human History:

An international team led by researchers from the Max Planck Institute for the Science of Human History, the Freie Universität Berlin and the University of York has uncovered details about the diet of early farmers in the central Anatolian settlement of Çatalhöyük. By analyzing proteins from residues in ancient pots and jars excavated from the site, the researchers were able to find evidence of foods that were eaten there. Although previous studies have looked at pot residues from the site, this was the first to use proteins, which can be used to identify plants and animals more specifically, sometimes down to the species level.

Knowledge of the diet of people living in the prehistoric settlement of Çatalhöyük almost 8000 years ago has been completed in astonishing scope and detail by analyzing proteins from their ceramic bowls and jars. Using this new approach, an international team of researchers has determined that vessels from this early farming site in central Anatolia, in what is now Turkey, contained cereals, legumes, dairy products and meat, in some cases narrowing food items down to specific species.

Related reading: The Hittites of Anatolia; The Trapezoid in Ancient Architecture and Technology; ÇATALHÖYÜK 2005 ARCHIVE REPORT Çatalhöyük Research Project; The Last Days of Hattusa; The Luwian: Another Theory; A New Hieroglyphic Inscription from Pancarlı Höyük
Posted by Alice C. Linsley at 9:22 AM