The Trapezoid in Ancient Architecture and Technology


Alice C. Linsley
﻿﻿﻿﻿
Lepenski Vir is an important Mesolithic archaeological site including a series of Mesolithic villages on a high terrace on the Serbian bank of the Iron Gates Gorge of the Danube river, near Donji Milanovac. In this region there were at least six village occupations between 6400 and 4900 BC.

The trapezoid was an important architectural feature among the peoples living in Lepenski Vir. Their trapezoid houses were wooden with sandstone floors. Some of the floors were covered with limestone plaster and burnished with red and white pigments. The homes had a central hearth with a fish-roasting spit in each structure. Several of the houses held altars and sculptures formed of the sandstone rock. Many of the large sculptures combine human and fish features, similar to statues found at ancient Tyre and Sidon in modern Lebanon. Sidon, called Saida today, means "fishing" in Arabic. Fish images were common among river populations that depended on fishing.

Lepenski Vir dates to the same period as Catal Hoyuk. These sites provide a glimpse into Mesolithic daily life and rituals. Lepenski Vir is famous for its stone idols, some of which have a trapezoid shape like the one shown below. 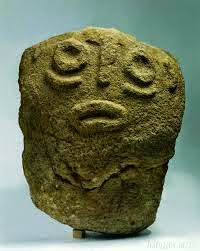 In many houses at Catal Hoyuk the main room was decorated with plastered bull skulls (bucrania) set into the east or west walls. These reflect the religious sun symbolism of these archaic peoples. The bull with the sun resting on its horns represented the overshadowing or presence of the Creator. This image also represented the divine appointment of rulers, as in this image of a ruler found at Mohenjo-daro. 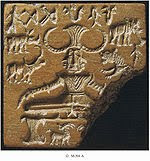 The same solar symbolism is found in Hittite religion. The architecture of the Hittites included trapezoidal doors such as the entrance to the chamber of Suppiluliuma II in Hattusa, modern Turkey (shown below). 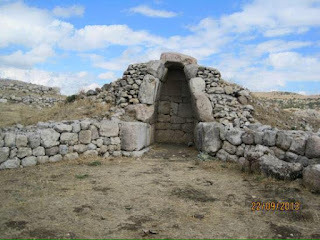 The Mesolithic settlements at Lepenski Vir and Catal Hoyuk appear to be related to populations in Y-DNA Haplogroup I2, the most common paternal lineage in Macedonia, Bosnia, Serbia, Croatia, Montenegro, Albania, Hungary, Romania, Moldova, Bulgaria and Sardinia, and a major lineage in most Slavic countries. It is found at a frequency of 5 to 10% in Germanic countries.
There is a close correspondence between the populations in Haplogroups 12 and R1b. These haplogroups are of special interest to Biblical Anthropologists.

Throughout ancient Sardinia the doors of fortifications have a trapezoid shape as shown below.


The ancient nyraghe of Sardinia resemble the beehive sheep cotes found throughout the region populated by peoples of the haplogroups mentioned above. These sheep cotes were sacred places.

The shape of these doors resembles the trapezoidal doors of tombs and temples of ancient Egypt and the structures built aboriginal peoples (3500 BC) of the Andes. 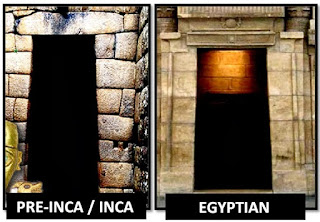 The ancient Babylonians tracked the apparent decreasing velocity of Jupiter from the planet's first appearance along the horizon, to 60 days later, and then 120 days later. If drawn on a graph, this relationship is represented in the shape of two conjoined trapezoids. According to science historian Mathieu Ossendrijver, the area of each trapezoid describes Jupiter's total displacement (measured in degrees) along the ecliptic, or the path of the sun. Jupiter was regarded as the king planet and represented the Creator God. The sun was the emblem of the Creator. So the alignment of Jupiter and the Sun was of special interest to the ancient priest-astronomers.

Trapezoidal stone tools were found in Japan on Mount Takaharayama. The tools date to roughly 35,000 years ago and were used to mine raw stones from the mountain. Akira Ono, a professor of archaeology at Tokyo Metropolitan University, reports that these trapezoid tools are like those found in loam layers in the Kanto region that date back 35,000 to 40,000 years ago.

The oldest stone tools with a trapezoid shape have four sides, two of which are parallel. These were found in Southern Africa and date to 280,000 to 40,000 years ago.