Some Marks of Prehistoric Religion

Humans have had an impulse to religious beliefs and rituals from the very beginning. This is evident from anthropological and archaeological studies of archaic populations. Such studies have given us a fairly good understanding of the general pattern of the religious life of early humans. These include rock shelters with shrines; ritual burial; observation of the stars and constellations, and symbolic communication through wall paintings and symbols such as T, X, O, V and Y. To the modern eye, these appear to be letters of the alphabet. However, these symbols once represented a complex of information helpful to early humans.

Archaic peoples lived in rock shelters for security. Later human populations lived at fortified mounds. Such shelters have been found virtually all over the Earth: Southern Africa, North and South American, the Pacific Islands, Australia, Siberia, parts of Europe, and parts of Asia.

The "high places" and fortified mounds are called "ophel" (Hebrew עֹ֫פֶל). The root of the word ophel is OP and pertains to a complex of interrelated ideas: seeing (optic); armed guards (opiltes); walled towns (oppida), and sun shrines (O'piru) served by a caste of priests known in the ancient world as Ha'piru, Ha'biru (Hebrew) and 'Apiru.


The oldest elevated settlements were near water sources. The oldest ophel in Jerusalem is near the Gihon Spring. Similar sites include Deir Tasi in Egypt; Jarmo in Iraq, and Tell Hassuna in Iraq. Of particular interest is the Paleolithic population that lived near the ravine or wadi known as Wadi-en-Natuf near Jerusalem. The Natufian population employed micro-flints, weapons, stone tools, and primitive agriculture. Artistic expressions included rock drawings and wall paintings, and they were sea travelers between 12,000 and 10,000 B.C. There are about 40 Paleolithic sites in the hills surrounding Jerusalem, many of them near Bethlehem. Surrounding Jerusalem, there are at least 28 Neolithic sites that fit the same description: elevated shelters near a water source.

Evidence of human habitation in the area of Bethlehem between 100,000-10,000 BC is well-attested along the north side of Wadi Khareitun where there are three caves: Iraq al-Ahmar, Umm Qal’a, and Umm Qatafa. These caves were homes in a wooded landscape overlooking a river. At Umm Qatafa archaeologists have found the earliest evidence of the domestic use of fire in Palestine.

Another word for these fortified shelters is kar. Karnak on the Nile and Carnak in Brittany are examples. In Dravidian car means "sheltered together" and kari refers to a river. In Manding kara means "to assemble."

Since the Kar were places of burnt offerings, the term is often associated with charcoal and soot. The Turkish kara means "black." In Magyar, korom refers to soot, as does the Korean word kurim. Among the Nilotic Luo, kar specifies a place with boundaries.

The kars of the archaic world were mainly circular. Ki-kar refers to a circle, as in Exodus 25:11: ki-kar za-hav ta-hor, meaning "circle of pure gold."

Many rock shelters (kar) have been identified in the Carpathian mountain range. The range is called Karpaty in Czech, Polish, and Slovak, and Карпати in Ukrainian, Carpați in Romanian, Karpaten in German, Kárpátok in Hungarian, Karpati in Serbian, and Карпати in Bulgarian. In Albanian, karpë means "rock."


In 2012, 44,000 year tools were recovered at Border Cave, a rock shelter in the Lebombo Mountains of South Africa.

This 77,000 year old red ocher stone with cross markings was found in the Blombos Cave of South Africa.

In 2008, a red ocher processing area was uncovered in the 100,000-year-old levels at Blombos Cave. Archaeologists also found two tool kits there. Counting devices have been found in this region also. They date between 43,000 and 80,000 years.

There were tunnel mines 80,000 years ago in the Lebombo Mountains. This was the site of major mining operation. Stan Gooch reports:


"One of the largest sites evidenced the removal of a million kilos of ore. At another site half a million stone-digging tools were found, all showing considerable wear. All of the sites in fact produced thousands of tools and involved the removal of large quantities of ore; and while some were open quarries, others had true mining tunnels."

The world's oldest known mattress was unearthed in at the Sibudu Cave site in KwaZulu-Natal, South Africa. The mattress consists of layers of reeds and rushes. Archaeologists found that bedding had accumulated in the cave over a period of 39,000 years, with the oldest mats dating to 77,000 years ago.

In the 1990's, archaeologists discovered this 70,000 year old python stone carved into the side of a mountain in an extremely secluded part of Botswana. The stone has over 300 indentations made by humans to give it the shape of a python. The python appears to have been a sacred symbol for the archaic humans who lived here, so this rock shelter also would have served as a shrine. There are two paintings on one wall of the cave. 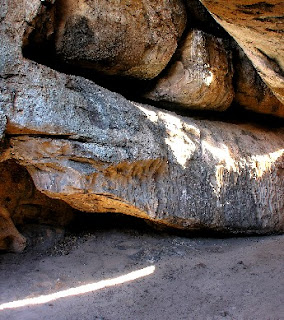