Facts and Theories About the Philistines

The Philistines were the 12th century B.C. peoples whose principal cities were Ashkelon, Ashdod, Ekron, and Gath. A famous citizen of Gath was Goliath, who David defeated in the valley of Elah. Gath sat on the border between Judah and Philistia in Gaza. The people of Gath would have been glad to take possession of the fertile Elah Valley. Philistine control of the valley also would have given them access to the interior of Judah.

Archaeologists call this Iron Age I population "the Sea Peoples" and there is little doubt that they, like the Egyptians, were adept at seafaring. The Philistines dominated the agriculturally rich coastal strip from Gaza in the south to Tell Qasile in the north, near modern Tel Aviv.

According to Genesis 10:14, the Philistines were related to the Nilotic Mizraim clans and the descendants of the Casluchim and the Caphtorim. Deuteronomy 2:23 claims that the Avvim lived in villages of Gaza before the Caphtorim came from Caphtor (Crete?) and displaced them or intermarried with them.

Scholars are uncertain about the original location of Caphtor, but R. A. Stewart Macalister’s excavations at Gezer suggest that they may have come from Crete. The artistic work found by Macalister at Gezer reflects the Minoan style. That peoples from Africa had migrated to Crete thousands of years before has been shown by Thomas Strasser. He and his team found hundreds of tools of African origin on Crete dating to between 100,000 and 130,000 years.

The Avvim of Gaza may be the descendants of the Natufians who inhabited this region between 15,000 and 9,000 years ago. Dorothy Garrod coined the term "Natufian" based on her excavations at Shuqba cave in the western Judean Mountains.The Natufians populated parts of Western Egypt (Fayoum Oasis), the area of Mount Carmel, and parts of Syria. They built the original settlement at Jericho. Confirmed Natufian settlements in Gaza are shown on the map below. 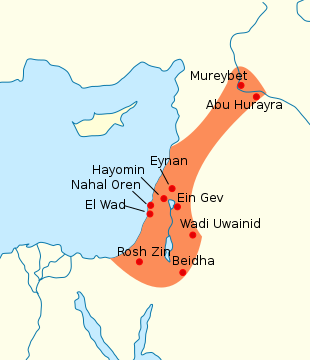 British Archaeologist, Graeme Barker, notes "the similarities in the respective archaeological records of the Natufian culture of the Levant and of contemporary foragers in coastal North Africa across the late Pleistocene and early Holocene boundary."

Harvard Professor of Prehistoric Archaeology, Ofer Bar-Yosef, notes that microlithic forms such as arched backed bladelets and La Mouillah points, as well as the parthenocarpic figs found in Natufian territory, originated in the Sudan.

Distinguished Research Professor at UCLA, Christopher Ehret, notes that the intensive use of plants among the Natufians was first found in Africa, as a precursor to the development of farming in the Fertile Crescent. 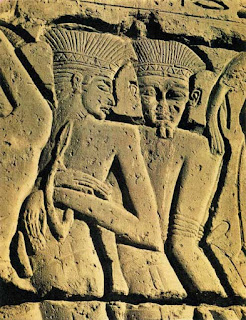 Portraits of captured Philistines on the walls of the Madinet Habu temple.
A Philistine prisoner is shown with his hands bound.

At the time of King Saul and David, Gezer was under Egyptian political control and cultural influence. The Philistines had a long standing relationship with the rulers of Egypt. This explains Exodus 13:17, which states: “When Pharaoh let the people go, God did not lead them on the road through the Philistine country, though that was shorter. For God said, “If they face war, they might change their minds and return to Egypt.”

The main coastal route northward from Egypt is called "the road/way through the Philistines' land" in Exodus 13.17. The Egyptians had fortified settlements at many locations along the major trade routes. During the Middle Bronze Age (ca. 2200–1500 BC) as much as 70% of the population of Canaan lived in these fortified towns. Examples include Tell el-‘Ajjul and Gezer with its gate, tower, and protected water system. These high places were under the control of Egypt from about 2000 to 1178 BC. They were stops along the major routes from Egypt to Syria and the Orontes. The Egyptians build one of their most remote fortification at Meroe on the Orontes in Modern Turkey.

One route, the Horus Way, was the southern section of the Way of the Sea (derek hayyam) mentioned in Isaiah 9:1. This road joined the Nile Valley to the area that came to be occupied by the Philistines. There were numerous Egyptian fortifications along the Horus Way and it appears that Philistines served in the garrisons of these fortifications. The American archaeologist William F. Albright believed that "The Philistines were evidently settled in the Coastal Plain by permission of the Pharaoh, as becomes clear from his [Ramesses III's] inscriptions [at Medinet Habu]." (William F. Albright, The Excavation of Tell Beir Mirsim in Palestine, vol. 1: The Pottery of the First Three Campaigns, Annual of the American Schools of Oriental Research (ASOR) 12 (New Haven, CT: ASOR, 1932), p. 58.)

After about 1000 BC, Israel's power and status had increased, overshadowing the power of the Philistines. The new king of Israel was Solomon, David's son. He married the daughter of the king of Egypt. The pharaoh took Gezer and gave it as a wedding dowry to King Solomon (1 Kings 9:16).

Saul had been chosen in hopes that he would strengthen Israel against the Philistines, but that did not happen. When the young man David proved to be the greater warrior, Saul turned against David. David fled for his life and grew strong in his reliance on the LORD.


Israel and Philistia meet for battle

I Samuel 17:19-51 tells the story of the confrontation between the forces of King Saul and the Philistines in the valley of Elah. The Philistine champion in this encounter was Goliath. According to the Biblical account, Goliath cursed the true God and made fun of David and his Hebrew people.

Elah refers to the Valley of the Terebinth (Emek HaElah in Hebrew: עמק האלה‎). Terebinth trees (Pistacia atlantica) and oaks grew in the place where the Israelite army camped.

To enter the territory of Judah, the Philistines had to come through the Elah Valley. It is likely that they had in their sights the fortified city at Khirbet Qeiyafa in the Elah Valley, discovered by Yosef Garfinkel, and excavated under his direction from 2007 to 2013. The city is dated between 1050 and 915 BC and sat on the summit of a hill that borders the Elah Valley on the north. This is on the main road from the coastal plain of Philistia to Jerusalem.

Another city in the area is Adullam. It was on an elevated site and near the well-traveled route which later became a Roman road through the Elah Valley. Judah’s friend, Hirah, was from Adullam. While Judah was visiting Hiram, arrangements were made for Judah to take his second wife. If Judah followed the marriage pattern of his Horim, this bride would have been Judah’s patrilineal cousin. The Hebrew text shows evidence of emendation. This bride is said to be a daughter of Shua, but it is more likely that Shua was one of Hirah's daughters because Shua is a woman's name. An earlier Shua is mentioned in 1 Chronicles 7:32 as the daughter of Eber. She lived seven generations before Judah.

King David sought refuge in the area of Adullam after being expelled from Gath by King Achish. David hid from Saul in a cave near Adullam (1 Sam. 22:1). David’s father, Jesse, came to him there. Jesse was in danger also, so David sought refuge for his family in Moab. “David brought them before the king of Moab; and they dwelt with him all the while that David was in the stronghold.” (1 Sam. 22:4). This appears to be a case of calling on the aid of kin. Jesse was a descendant of Boaz and his Moabite wife, Ruth.

Related reading: Gezer Calendar; Who Were The Philistines?; The Peoples of Canaan; Pulp Fiction: The Sea Peoples and the Study of 'Mycenaean' Archaeology in Philistia by Louise A. Hitchcock and Eren M. Maeir