A moiety is a descent group that coexists with only one other descent group within a society. Each of two groups into which a people is divided has a responsibility to the other group. Moieties are found among the Australian Aborigines, some American Natives, and the red and black Nubians of the Biblical world. Matrilineal moieties traced kinship along the mother's line. Patrilineal moieties trace kinship along the father's line.

A society may be divided into two unilineal descent groups that serve to protect and balance each other. Such groups are called moieties. An example from the ancient world is the moiety of the red and black Nubians. 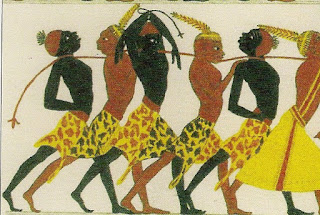 The red and black Nubians in the image above were captured by the Egyptians. They appear to be people of high tank since they are wearing the leopard skins traditionally worn by rulers, priests and chiefs. The fact that both red and black were taken captive indicates that they fought together against the Egyptians.

The individual's identity within the moiety determines who they may marry. It appears that each group in the ancient Nubian moiety married according to skin tone. Yet the two groups likely claimed descent from a common male ancestor.

Even among the red and black Nubians there was a range of skin tone. These red Nubian warriors are an example. Their wavy black hair and feathers resemble the Nabatean warriors of Petra in Edom. The Edomites were known to have a reddish skin tone. Esau is described as red and hairy in Genesis 25:25.  Also, David is described as having a red skin tone.


Moieties usually consist of a few thousand people in each group. The clans within the moieties often function in specialized teams such a metal workers, warriors, tanners and potters. The reciprocal nature of their relationship encourages barter and exchange of services.

The Nubians appear to be in the R1b Haplogroup, which indicates that they are related to Noah and the rulers listed in Genesis 4, 5, ll, 25, and 36. 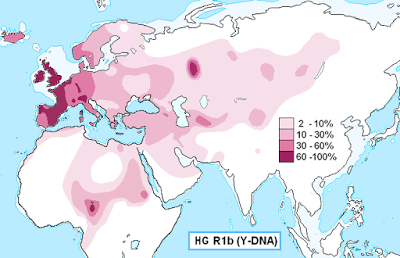