Archaic and Ancient Symbols of Authority

Royal priests in the archaic world dispersed widely in service of kingdom builders. Images of these priests have been found at the oldest known temples. The images show the priests wearing leopards skins as a sign of their priestly authority. Here are two such images.

Iron beads were a symbol of royal and priestly authority and these were worn by priests and warriors. Naqada settlements have yielded decorated pottery, clay figurines and objects made of ivory and iron, as well as alien materials like lapis lazuli, indicating external trade. The civilization advanced due to irrigation, trade, political alliances along kinship lines, and the earliest writing.

The Naqada culture (c. 6000-4000 BC) included the sites of el Badari, Nekhen (Hierakonopolis), Qau, and Gerzeh, where Egyptologist Wainwright discovered meteoritic iron beads, some of the earliest known artifacts of iron. Stone tools dating to 12,000 years have also been found in the area, revealing a long established human population. The Horite Hebrew shrine city of Nekhen was thriving 5000 years ago. Some paintings found here show figures wearing what appear to be iron beads around their necks.

The ancient Egyptian word for meteroric iron - bja (metal from heaven), and they were metalworkers. Beja corresponds to the Sanskrit word bija, meaning semen or seed. Meteoritic iron was used in the fabrication of iron beads in Nubia about 6000 years ago. These beads may have been perceived as seeds from heaven which brought divine power to the wearer. Meteoritic iron was used in the fabrication of crooks and flails, the symbols of the Egyptian and Kushite pharaohs. These symbols were believed to give the ruler powers from heaven.

The ancient Egyptian rulers accessorized with meteorites. The material was associated with divine power. King Tut's dagger had a tip made of meteoritic iron. The dagger, found in 1925, had a gold sheath.

Commonly, iron artifacts are found in the graves of rulers. Diane Johnson says, "Iron was very strongly associated with royalty and power." The ancient Egyptians had a hieroglyphic sign for “iron from the sky" by the 13th century BC.

The crook was another symbol of authority. The prehistoric painting below was found in Sudan. It shows warriors carrying crooks and flails.

These are the symbols of Egyptian rulers. Here is an image of King Tut's crook and flail. 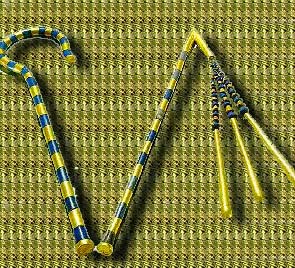