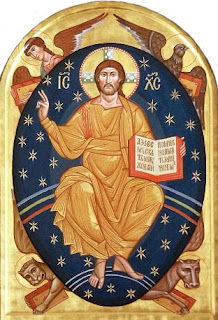 The LORD sits enthroned over the flood; the LORD is enthroned as King forever.
Psalm 29:10

Many years of anthropological investigation using Biblical data has convinced me that Messianic expectation is one of the earliest religious beliefs. It is expressed in the burial practices of Abraham's archaic ancestors who believed in bodily resurrection and anticipated the coming of a Righteous Ruler who would overcome death and lead His people to immortality.

Through Biblical Anthropology some principles have been established to identify and authenticate material of great antiquity. On such principle states: "The more broadly dispersed throughout the canonical books a verse, quotation, or allusion is, the older it is." That means that Psalm 110:1 is one of the oldest Messianic references in the Bible. It appears in various forms in the Old Testament [Ps. 145:13; Isaiah 9; Daniel 4:34 and 7:27]  and at least 20 references are made to this in the New Testament.

Psalm 110: 1 reads, The Lord says to my Lord: "Sit at My right hand until I make Your enemies a footstool for Your feet."

It is generally assumed that David wrote these words under the inspiration of the Holy Spirit. However, that is not the case.  David received these words from his Horite Hebrew/Habiru ancestors. This belief was stated in these exact words at least 1000 years before David in the Coffin Texts. Consider how Horus, the archetype of Christ, describes himself in the Coffin texts (Passage 148):

"I am Horus, the great Falcon upon the ramparts of the house of him of the hidden name. My flight has reached the horizon. I have passed by the gods of Nut. I have gone further than the gods of old. Even the most ancient bird could not equal my very first flight. I have removed my place beyond the powers of Set, the foe of my father Osiris. No other god could do what I have done. I have brought the ways of eternity to the twilight of the morning. I am unique in my flight. My wrath will be turned against the enemy of my father Osiris and I will put him beneath my feet in my name of 'Red Cloak'."

Here we find the words of Psalm 110:1, a Messianic reference, and the context for Paul's words: "And God raised us up with Christ and seated us with him in the heavenly realms in Christ Jesus." (Ephesians 2:6)

Therefore, let us live and pray as ones seated with Christ! Let us take hold of the promise of Christ: "To the one who is victorious, I will give the right to sit with me on my throne, just as I was victorious and sat down with my Father on his throne." (Revelation 3:21)

Horus, the Seed or "Son" of the Creator, was the embodiment of divine kingship and the protector of the reigning pharaoh. Ra and Horus shared the same emblem, the Sun, and were regarded as one, as Jesus confirmed when he said, "I and my Father are one." (John 10:30; John 17)

In Utterance 699 of the Pyramid Texts, Horus ascends aloft like a heron and is exalted at his Father's side. The prayer reads: "Be young, be young beside your Father."

Horus was conceived when Hathor was overshadowed by the Sun. Likewise, the angel told the Virgin Mary, "The Holy Spirit will come on you, and the power of the Most High will overshadow you. So the holy one to be born will be called the Son of God." (Luke 1:35)

Hathor is shown wearing the sun within the horns of the cow. The Y image came to designate divinely appointed rulers among Abraham's people: Yitzak, Yacob, Yaqtan, Yishmael, Yeshua, Yishbak, etc. One of the signs of divine kingship was that the new born child was swaddled in a red cloak.

The Nilotic Rulers and Messianic Expectation

Saint Augustine wrote, "that the Egyptians alone believe in the resurrection, as they carefully preserved their dead bodies." (Jon Davies, "Death, burial, and rebirth in the religions of antiquity", Routledge, 1999, p. 27) However, the peoples of the Upper and Lower Nile shared this belief which they received from their Proto-Saharan ancestors. Royal tombs were built at the Horite Hebrew/Habiru shrine city of Nekhen before the first Egyptian Dynasty. The oldest section of Nekhen dates to 3800 BC. At Nekhen, Proto-Saharan nobles were buried with red ocher as early as 3500 BC.

One intriguing discovery at Nekhen was the recovery of an almost complete beard in association with the redheaded man in Burial 79. Consider how the descendants of these ruler-priests are often described in Genesis as red an hairy. Esau and David are examples, and the people who live in Abraham's territory of Edom was known to have a distinctive red tone. Edom or "Idumea" means land of red people.

Embalming of royal mummies was already a science by 2800 BC. Reference to a Righteous Ruler-Priest who would overcome death and lead his people to immortality is found in the Pyramid Texts (2400 BC) and in the Coffin Texts (2100 BC). These texts express the desire of the Kushites and Egyptians for immortality. The offices of ruler and priest were connected. They believed they would receive eternal life through the agency of their ruler-priest and they yearned for his appearing.

They ancient Kushites and Egyptians made a great ceremony of the burial of their dead kings. The construction of the royal tomb took many years. Upon completion of the tomb, there was as consecration ceremony. When the ruler died, the embalmer priests carefully prepared the body. There was a procession to the tomb, lead by the priests and royal family, the people in their train.  After prayers and animal sacrifice, the tomb was sealed. The grieving people returned to their homes. It was believed that the Righteous Ruler would rise on the third day just as the sun broke on the eastern horizon. At his rising the Righteous Ruler would gather his people to himself and lead them to immortality.

This is pictured in Psalm 68:18:  "You ascended on high, leading a host of captives in your train and receiving gifts among men, even among the rebellious, that the Lord God may dwell there."

This is what the Apostle Paul refers to when he wrote, "This is why it says: 'When he ascended on high, he took many captives and gave gifts to his people.'" (Ephesians 4:8)


Related reading: Who Were the Horites?; Who Were the Kushites?; The Christ in Nilotic Mythology; Mining Blood; The Edomites and the Color Red; The Urheimat of the Canaanite Y; The Solar Imagery of the Proto-Gospel