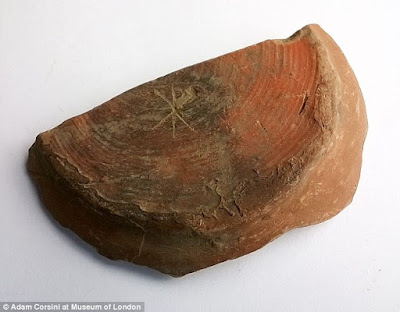 The pottery shard was found in 1970 during excavations at Brentford High Street in London. The excavations discovered the route of the Roman road heading out from Londinium to the west of Britain. Volunteers at the Museum of London's Archaeological Archive decided that the symbol on the bottom is a monogram of chi (Χ) and rho (Ρ) - the first two letters of the Greek Khristos. That may be, as there were Celtic Christians and Hebrew Christians living throughout the Isles in Roman times. Joseph of Arimathea is an example. It is likely that the early Christians appropriated an archaic solar symbol to represent Jesus Christ.

There is no reason to doubt the historicity of Joseph Arimathea's connection to Cornwall in spite of the dubious legends from the Middle Ages. He was among those early followers of Jesus in Cornwall, where He had business as a metal tradesman and a mining expert. From the time of the earliest pharaohs mining and tomb construction were the work of ruler-priests. Joseph was likely engaged in both, even as he was responsible for the tomb where the Lord Jesus was laid to rest. As a high ranking priest of the Sanhedrin, he had authority to ordain priests. As a follower of Jesus Messiah, he is the key to understanding the continuity between the ancient priesthood of the Habiru/Hebrew and the priesthood of the Church.


If the symbol is a Chi-Rho, this isn't big news. Christians lived in Roman Britain. However, I have doubts that the mark is a Chi-Rho. The symbol more closely resembles the six-prong star found on archaic rock shelters dating to the oldest period of Vinča culture (6th-5th millennia BC).

The mark was found among the Hittites who buried great warriors in their chariots. It was found among the ancient peoples of Gaul, as shown on this anthropomorphic stele that dates to the late Copper Age and the Early Bronze Age. It was discovered during an archaeological excavation on the Rocher des Doms, Avignon. 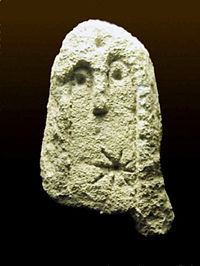 The 6-prong solar symbol was one of the images found among the Celts of the northern Iberian Peninsula (northern Portugal, Galicia, western Asturias and north western León). It is seen here on these 9th century BC artefacts found at the archaic high places. 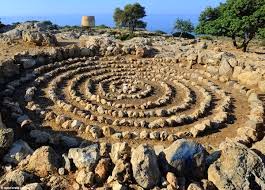 The 6-prong star or rosette symbol is a merkaba, or a solar chariot, associated with the Hebrew priests. It is found on the ossuaries of many of the priests and their family members. The symbol appeared on Jewish ossuaries, often inside a circle as shown on this 2000-year ossuary of Miriam, daughter of Yeshua. 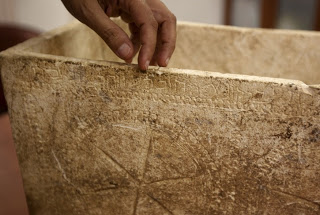 The same image appears on this ossuary of Joseph Caiaphas, the high priest (shown below). 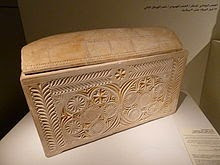 This was the solar chariot of the Creator, the merkaba, vehicle of Light to carry the dead to the place of rest from which they hoped to rise again. In the Ethiopian Church a replica of the Ark, called ta-bot, is decorated with this 6-pointed star inside a circle at the center of the ark. The very image appears in the grave chancel of St. Magnus in Kirkwall, Orkney. 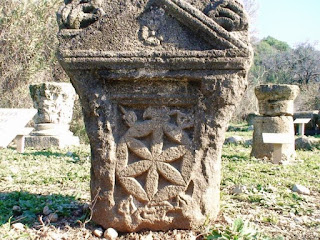 This solar rosette is also found on this marker stone at Banias in Northern Israel (shown above). The mark is found on the Magdala Stone (shown below.) 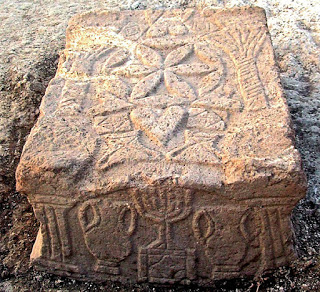 When I asked Jodi Magness, who has been studying the iconography of early synagogues, about the solar imagery on the Magdala Stone, she responded that "at least 1-2 archaeologists have suggested that the imagery on it should be understood in connection with the idea of the divine chariot."

There is an ancient association of the merkaba with trees as shown on the Magdala Stone. This is a Messianic image. This 4th century Nativity image shows the Christ resting between two trees, a pine and an oak. 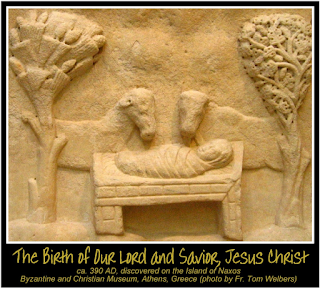 In Old Church Slavonic drievo refers to a tree or wood. The Serbian drvo is from the Proto-Indo-European drew-o, with the affix O being a solar symbol. The root deru- means to be firm or solid. The word druid is a compound of two words: drvo, dervo, derevo - tree in Slavic and vid, ved - to see, to know, to teach. In Old Irish the druid was a tree-seer. The word for "ancient, primeval" in Slavic languages is drevan. The word literally means as old as a tree.

Seers or judges sat under trees in the ancient world. Deborah sat under her tamar tree (Judges 4:4-6). A tamar is a date nut palm and was associated with the female principle. This was located between Ramah and Bethel in the hill country of Ephraim (a north-south axis). Genesis 12 that tells us that the moreh or prophet/seer consulted by Abraham sat under an oak between Bethel and Ai (an east-west axis). The oak was associated with the male principle. The oak leaf often appears on the tops of Serbian and Irish loaves, as shown below. 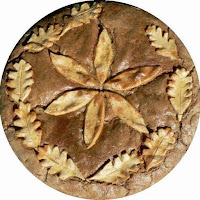 On this traditional Serbia cake the solar rosette is surrounded by oak leaves. The Giving God, sometimes called Hesus (the primitive Horus archetype) was crucified on an oak tree. The hope of his third-day resurrection was enacted by the sowing of grain in the fields. In antiquity, this annual ritual was overseen by Horite priests who led the people in procession to the fields, much as Anglican priests officiate at Rogation Day ceremonies.

The ancients Celts placed a similar mark on the tops of ceremonial bread loaves. The 6-prong rosette is found to this day on Irish Maslin bread (shown below). 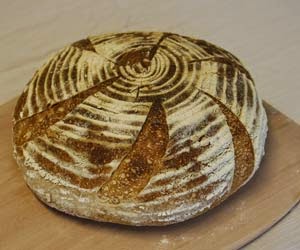 Maslin bread is the oldest known bread eaten by the Celts. It was the bread of common folks, containing a blend of wheat and rye flours. The rosette is a solar symbol that speaks of the Creator whose emblem was the Sun. It spoke of hope of rising from the dead as the Sun rises each morning.

All this to say that even if the mark on the Brentford shard is a Chi-Rho, that symbol itself emerged from the solar imagery of the Proto-Gospel and reflects the dispersion of the R1b Horite Habiru priests throughout the ancient world. It appears that early Christians adapted an ancient solar symbol to represent Jesus Christ and it was very fitting that they should have done so.