Job said, "Naked I came from my mother's womb, And naked I shall return there. The Lord gave and the Lord has taken away. Blessed be the name of the Lord." Job 1:21

There is an aspect to the story of Job that is often overlooked: his experience of God as a giver. It is not readily apparent since the sufferings of Job speak of one loss after the other. However, the end of Job's story tells the truth about God: Job's God gives and takes away, and gives again, and again, and again.

Job is the male counterpart of Naomi, Ruth's mother-in-law, who had a similar experience of God. She lost her husband and then both her sons. In her old age she was without anyone to provide for her. Yet God had given her a worthy daughter-in-law and through Ruth, Naomi's sorrow and bitterness ("call me Mara") was turned to joy as she held her grandson Obed.

Likewise, Job's latter days were better than the former days because the Lord "restored the fortunes of Job when he prayed for his friends, and the Lord increased all that Job had twofold." (Job 42:10)

The Giving God or the "Good God"

Hromi Daba was also known by the names Crom Dubh and Grom Div. His association with the Sun is seen on the Triglav Stone (below) from Istria which shows the Giving God haloed by the Sun. This Giving God was also understood to be a Trinity. Triglav refers to trinity or triune. My friend Goran Pavlovic has written about this stone at his blog Old European Culture. 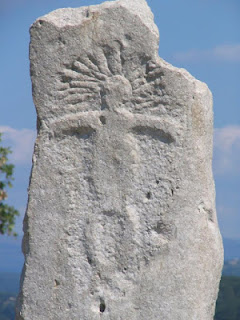 The Immutability of the Giving God

Just as the Sun does not change its course, so the Giving God does not change. This is what is expressed in James 1:17 - "Every good thing given and every perfect gift is from above, coming down from the Father of lights, with whom there is no variation or shifting shadow."

There is no other giver like this Good God who gives and takes away and gives again and again; who restores what has been lost and shines His light on all equally.

This understanding of God as the Good Giver who does not change represents a radical critique of the nature religion associated with false gods. He is not associated with rain and thunder or with fire or ice. I Kings 19:11-16 expresses this distinction.

The Lord said, “Go out and stand on the mountain in the presence of the Lord, for the Lord is about to pass by.”

Then a voice said to him, “What are you doing here, Elijah?”

He replied, “I have been very zealous for the Lord God Almighty. The Israelites have rejected your covenant, torn down your altars, and put your prophets to death with the sword. I am the only one left, and now they are trying to kill me too.”

Then the Lord told Elijah what he was to do in preparation for the day when the whirlwind would catch him up to the Lord in heaven. (II Kings 2:1)

There is a great hymn that speaks of this theme:

Jesus shall reign where'er the sun
Does his successive journeys run;
His kingdom stretch from shore to shore,
Till moons shall wax and wane no more.

Where Christ displays His healing power,
Death and the curse are known no more:
In Him the tribes of Adam boast
More blessings than their father lost.

Related reading:  The Solar Symbolism of the Proto-Gospel; The Ra-Horus-Hathor Narrative; Sun Symbolism and Blood Guilt; A Tent for the Sun; The Fatted Calf; Stone Work of the Ancient World; The High Places; Abraham and Job: Horite Rulers