Editor's note: Apart from the Nile Valley, Ethiopia, and the Bantu migration, African history before 1000 CE hardly appears in world history classrooms and texts. Most of us assume that there simply isn't enough documentary or archaeological evidence to say anything about social and technological change. 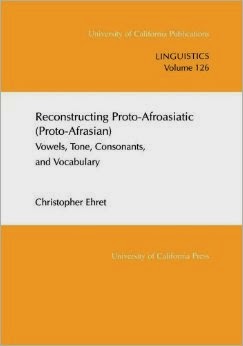 Christopher Ehret wants to change that. Among the most innovative and provocative scholars working in African history, Ehret has made a career of studying the development of African languages, teasing from the linguistic history evidence for ancient social, economic, technological, and religious development. Ehret acknowledges that some readers may have trouble "getting comfortable with language evidence."1 The effort is worth the trouble. Languages "contain immense vocabulary resources that express and name the full range of cultural, economic, and environmental information available to their speakers."

Want to know when a particular people first domesticated animals? Take a look at their vocabulary for breeding and raising the animals. Look for similar vocabulary in languages spoken by related groups. If you can determine how long it has been since all these groups shared a common language, you may be on your way to dating the origins of stock raising. This is not easy work; it means applying a fine-grained knowledge of linguistic structure, while avoiding coincidental or misleading relationships. One test of the work is how well it predicts later archaeological discoveries. By that measure, Ehret has done well.

The Africa Ehret reveals cannot be described as unchanging or peripheral to world history. Among his most exciting ideas is that of an "African classical age," from about 1000 BCE to about 300 CE. During this period, he argues, peoples from four language families ­ Khoisan (sometimes known as Khoi-San and best known for the "clicks" in their languages), Afrasan (a.k.a., Afrasian or Afro-Asiatic), Nilo-Saharans and Niger-Congo peoples—encountered one another in the African Great Lakes region and along the eastern Rift Valley. That encounter helps account for the southward expansion of Bantu-speaking Niger-Congo communities, who adopted cattle-raising from Nilo-Saharan groups and independently worked iron. Recently, Ehret summarized much of this work in The Civilizations of Africa: A History to 1800.2

Christopher Ehret has been a valuable resource for Biblical Anthropology. His linguistic research resembles the detective work of Biblical anthropologists. Linguistically, the language of Nimrod's kingdom - Akkadian - has close affinity to the languages of the ancient Nile Valley, as has been demonstrated by Ehret's research. Ehret also recognizes that cattle were domesticated in Sudan as early as 9000 year ago. These cattle-herding Proto-Saharan or Saharo-Nubian peoples were among Abraham's ancestors. Messianic expectation originated with these peoples.

Dr. Ehret has written: "The linguistic, genetic, and archaeological evidence combine in locating the origins of this [Afrasian] family far south in Africa, in Eritrea or Ethiopia, and not at all in Asia. A complex array of lexical evidence confirms that the proto-Afrasian society belonged to the pre-agricultural eras of human history." (History of Africa, p.4)

Related reading: The Afro-Asiatic Dominion; When is the Evidence Sufficient?; The Urheimat of the Canaanite Y