A 1,500-year-old papyrus is one of the earliest surviving Christian amulets and was likely worn by an average person. It was re-discovered in the University of Manchester’s John Rylands Library. The text makes reference to the Lord's Supper and was written on the back of a grain tax receipt. Read about the discovery here.

Amulets were worn by early Christians, and this continued a tradition from before the time of Abraham. This article places too much emphasis on the influence of Egyptian magic. Amulets were worn for protection, as Christians today place crosses over doorways and in their cars.

The practice of writing sacred texts on objects was largely a priestly practice. In part, this is because the priests were the only people who knew how to write (scribes). The priests of Abraham's time wrote blessings and curses on the insides of bowls from which they poured out the blessings or curses. This is the significance of the seven bowls of Revelation 16.

This text reflects the Messianic vision and uses a very ancient reference - Christ "our God." The full text of the papyrus reads:


'Fear you all who rule over the earth.

'Know you nations and peoples that Christ is our God.

'For he spoke and they came to being, he commanded and they were created; he put everything under our feet and delivered us from the wish of our enemies.

'Our God prepared a sacred table in the desert for the people and gave manna of the new covenant to eat, the Lord’s immortal body and the blood of Christ poured for us in remission of sins.'

Dr. Tom McCollough of Centre College (Kentucky) has excavated in Galilee and found many amulets that date to Jesus' time and after. His team excavated at Sepphoris, a sprawling site on top of a large hill in Galilee. There was an amphitheater, a synagogue, a rich collection of mosaics and several nearby villages and roads. Sepphoris is located only 5 miles from Nazareth, northwest across the rolling hills. The influence of Egypt is evident in the mosaic floor of the Nile House in Sepphoris (shown below). 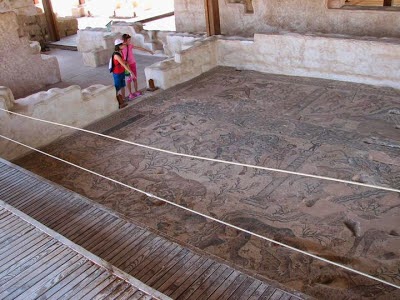