The Priests of Midian 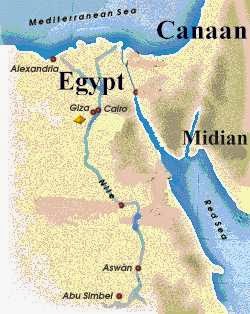 Abraham and his people were Habiru (Hebrew), the oldest known caste of royal priests. They are sometimes called Hapiru or Opiru in ancient texts. They were the mighty men of old who built kingdoms and spread their religious beliefs and practices widely. They were skilled in war, metal work, astronomy, writing and animal husbandry. Among them were the clans of Ar who today are called "Arabs." Originally the word designated a caste of scribes. Ar-ab means “father is scribe” or "scribal tribe."

The Arkites and the Arvadites are among the clans of Ar. They represent a two-clan confederation. The word “Arvadites” refers to residents of the Mediterranean island-city of Arvad (Arpah or Arphad in other ancient sources). Arvad is an extremely ancient city. Before the Phoenicians, it was populated seasonally by peoples passing from north Africa to Asia. Some of these were Netufians (Luo).

The Arvadites had close ties to the Egyptians and paid tribute to the Kushite Pharaohs for protection from the Assyrians. The Kushite Pharaoh Tahar-qo called the land of Canaan and Syria “Khor” which is a compound of K for Kush and Hor for Horus. Kash, Kwash, Akwanski and Kush are cognates referring to the First People, whose rulers were considered deified ancestors. They are said to have ruled the ancient world for 7000 years. In a message sent to the King of Tyre Tahar-qo wrote, “Oh Amun, what I did in the land of Nubia, let [ … … ], let me do it with your tribute (inw) of Khor (Syria-Palestine) which has been turned aside from you.” (Dan'el Kahn, p. 115)

The root of the names Arkite and Arvadite is AR and its origin is Proto-Saharan. Among the Igbo of Nigeria, the scribe clans were called Ar or Aro. The earliest known writing originated in Canaan among the coastline peoples of the Red Sea and Phoenicia. The Arabic word for throne is aarsh/ash and likely related to the scribal function attached to rulers. The Egyptian Asa-ar means the Serpent of Asa. Asa is a very ancient name for God. It appears in the Hebrew names of many rulers in Israel. The peoples living in Arvad, Tyre and Sidon employed serpent imagery in their temples. Among the Igbo even today there is a belief that the great serpent is a symbol for Christ (cf. Num. 21:9 - "Moses made a bronze snake and put it up on a pole. Then when anyone was bitten by a snake and looked at the bronze snake, they lived." Also John 3:14 - "Just as Moses lifted up the snake in the wilderness, so the Son of Man must be lifted up.")

Abraham had nine sons, according to the Septuagint. Here is a list of sons:

In the Horite marriage and ascendancy pattern, the proper heir was the first born son of the half-sister wife. Sarah was Abraham's half-sister, but she was barren. Thus Abraham complained to the Lord, "O Lord God, what can you give me seeing that I shall die accursed, and the steward of my household is Dam-Mesek Eliezer?" (Genesis 15:2)
God promised Abraham that Sarah would bring forth a son. In providing a son according to the divine promise, God overthrew the curse. Behold the pattern concerning Jesus Christ, the promised Son who overthrows the Curse!

These are the priest lines of Midian. They are related to the Horite rulers of Edom (Gen. 36). Jethro, Moses' father-in-law, is a descendant of Midian.

The Midianites competed for land with the Amorites. The terms “Amorites” and "Canaanites" are synonymous in Genesis 15:15-16 and Joshua 24:15, 18. The Amorites were the Am-Ar, meaning the people/tribe of Ar. They are called the Aro among the people living at the confluence of the Benue and Niger Rivers in Nigeria. Some migrated to this well-watered region before the time of Abraham. The late Nigerian historian, Dr. Catherine Acholonu, believed that the Amorites were a caste of scribes.

Today some Mahra/Masek are semi-nomadic and others are settled in small semi-fortified villages where they farm and raise chickens for eggs and goats for milk. They are known to aggressively defend their territories and water sources and are regarded as belonging to the warrior caste. Their chiefs control the goods and persons who pass through their lands.

The Mahra/Masek are an endogamous tribe, meaning that they marry within their kinship circle. Most men have only one wife, but the chief may have more than one. Children receive inheritances patrilineally, with the first-born son receiving the lion's share. Young girls are valued for childbearing and for the bonding of families through marriage. This was especially true in Abraham's time for both wives and concubines.


Related reading: Abraham's Two Concubines; Who Was Jethro?; The Lines of Ham and Shem Intermarried; Symbols of Authority Linked to Cain and Seth; The Genesis King Lists; Abraham's Nephews and Niece