The Priests of Nazareth


Jesus grew up in Nazareth in Galilee. He was brought here as a child from Egypt. Nazareth is on an ancient trade route that goes north from Egypt through Galilee. In Roman times it was called the "Via Maris" but the route was traveled for many centuries before the Roman presence in Palestine. Another ancient road went from Nazareth to Jerusalem and it was along this road that the priests of Nazareth traveled to the temple to perform their sacred duties when it was their appointed time of service. 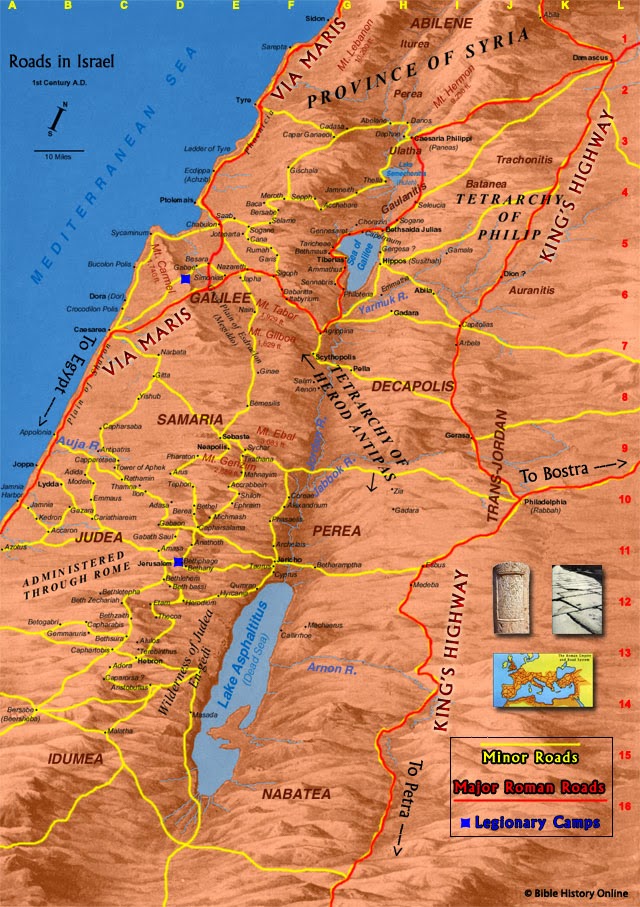 In Nazareth, Jesus preached his first recorded sermon (Luke 4:16). He read Isaiah 61:1-3, a Messianic prophesy, and then declared, "Today this Scripture is fulfilled in your hearing." His hearers understood that he claimed to be the fulfillment of the prophesy and this aroused their anger. Because of their unbelief "He did not many mighty works there" (Matthew 13:58).

When Nathaniel was told that the Messiah was from Nazareth, he wondered, "Can any good thing come out of Nazareth?" (John 1:46)  From Nathaniel's perspective, there was nothing remarkable about this town in the heart of an agricultural area in Galilee.

Jesus' closest followers were from Galilee, and it was to Galilee that He returned and met with His disciples after His resurrection. At the Last Supper, He informed his disciples: "After I have been raised, I will go before you to Galilee.” (Matt. 26:32)

In 1962 excavators discovered a small 3-4th century marble fragment with a list of the twenty-four priestly divisions in the ruins of a Caesarea synagogue. This list names the places where four of the divisions resided, including Nazareth. Until the discovery of this fragment, there was no extra-biblical record of Nazareth's existence before the sixth century A.D and no identification of a priestly division at that town.

There were twenty-four priestly divisions after the construction of the Second Temple. Nineteen of these divisions are listed in Nehemiah 12:10-22. In the Nehemiah list we find these names of particular interest: Joachim, Joseph, and Mattenai (also spelled Mattai/Mattan/Matthew). These are the names of priests who married the daughters of priests and from these lines came John the Baptist, Joseph, Mary and Jesus, the Incarnate Son of God. This was the line of Joseph of Hari-mathea, a voting member of the Sanhedrin. He and Nicodemus, another member of the Sanhedrin, buried Jesus’ body in a cave tomb similar to those used by their Horite ancestors in Bethlehem and Hebron. Joseph and Nicodemus experienced first-hand Jesus' death. They buried him and sealed the tomb. They believed that He rose from the grave, and at great personal risk, they testified to His resurrection.

Writing in the third century, Hippolytus records that Mary’s mother was a daughter of a priest named Matthan. Mary's father was the Horite shepherd-priest Yaochim (Joachim). Therefore, Mary was of the Horite ruler-priest lines that can be traed back to Abraham's Nilo-Saharan ancestors. Even those who hated Mary acknowledged her ruler status, as it is written in the Talmud: “She who was the descendant of princes and governors played the harlot with carpenters.” (Sanhedrin 106a)

According to 1 Chronicles 24:15, Nazareth was the home of the eighteenth priestly division, hapiTSETS (Happizzez). The name is related to the ancient Egyptian word for the life-sustaining Nile which was called Hapi. Again we have evidence that Jesus of Nazareth was of the Horite ruler-priest lines that can be traced back to the Nile Valley.